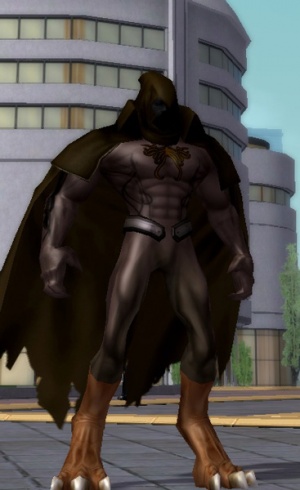 Nature or Nurture? When you have superpowers, what determines your allegiance? By all outward appearances, the psychic known as Mindward is a freak. His legs, atrophied through disuse, seem too small for his body and his feet too large. His arms, supermassive from constantly giving physical force to his mental attacks; seem too large for his torso; nevermind his nearly feral demeanor. His animalistic nature hides a kind but misunderstood soul. Shamed by society to hide his features, Mindward truly wishes to help others...But when people push and push at you all day...Even the best intentions get lost in translation. 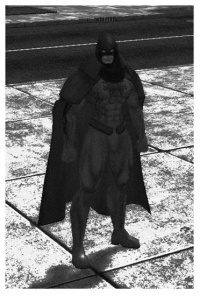 In the early years of heroism in Paragon City around the 1940's, Mindward was a hero of the downtrodden, oftentimes standing up for the little people. Ever one to condemn vigilantism and working outside of the law, he championed the Right and believed wholly in the System. His mutation gave him powerful psychic and psionic abilities that he could use to render criminals senseless vegetables. Despite his expansive intellectual abilities, Mindward's body was small and frail. His weak body would often get him into mortal trouble as he lacked the ability to regenerate that most other heroes seemed to possess. However, this inherent weakness seemed to endear him even more to the people. It didn't hurt that he was dashingly handsome and quite charming!

In 1952, tragedy struck. As so often happens with mutants, his mutation fully developed. Suddenly, Mindward's outward appearance became what he had spent his life fighting. His once handsome features became twisted, his small, frail body became monstrous, his human demeanor became feral; he found himself more comfortable running on all fours than walking like "normal" people. When his mutation became so evident, the people turned on him. No longer regarded as a hero Mindward became a pariah - People judged him harshly based on his outward appearance. Their prejudices drove him underground and into the sewers. Besides making his appearance monstrous, his mutation also gave him unnatural long life. Finding himself nearly immortal, Mindward has spent the last 60 years wandering the sewers of Paragon City.

After spending long years hiding in the sewers, Mindward has used the opportunity of the recent Praetorian invasion to escape to Praetoria. Authorities are not sure why he would do such a thing as he would be even more ostracized there. It can only be assumed that he has left Primal Earth to build up even more strength.