And I live by the river"
- The Clash, London Calling


At first glance, Katherine Lane seems just another black-clad psuedo-goth, a cynical anti-hero beset with angst and plagued by some tragic past. Rarely seen without a scowl on her face, her anger is no secret; it's easy to imagine her as an embittered vigilante, perhaps the abused daughter of a villain or a renegade magical weapon.

But there's something different here. Perhaps it's her brusque, no-nonsense manner, or her seemingly boundless energy. Maybe it's her bemusingly verbose conversational style, or the sharpness of her eyes as they watch you far too closely. Somehow, you know she's not as apathetic as she might seem.

At the core of Nightfane is a power surpassing idealism: a deep, dark, passionate rage. This is a woman who hates with a strength few could stand, who floods with anger at every injustice and burns to leave every lie exposed and withering.

This is a woman who will change the world, or die trying.

"Hope has two beautiful daughters. Their names are anger and courage; anger at the way things are, and courage to see that they do not remain the way they are."
- St. Augustine of Hippo

Above all, Kate gives the impression of being an extremely angry woman. It's not as if she doesn't display a variety of emotions, but none of them are without the tint of bitterness - her humour is sarcastic, her wit is caustic, her happiness is wry and cynical. She is, however, a woman of extraordinary passion - it takes a lot of energy and a lot of caring to fuel the kind of deep resentment she seems to carry. Whilst her attitude - and her taste for angry 70s punk bands - suggest that she's cynical and resentful, her actions show that she is far from apathetic; Kate's anger is precisely what drives her to act, to try to change the way things are, and to have hope for the future.

Kate is quite humourous, though it's sometimes hidden by her attitude - she has a very dry British wit, a sharp mind and a sharp tongue to match. She's quite verbose, but also speaks quickly and leaves little time to respond - in combination with her non-American accent, she often leaves those around her speechless as they try to work out what she's just said. She also doesn't appreciate wasting time, so she usually 'solves' this by simply changing the subject to "shall we get on with it, then?" and going back to the task at hand.

"Through the forest and over the sea

I know there's something waiting there for me

I know there's someplace that I'm longing to be

But it's through the forest and over the sea..."
- Captain Tractor, Through the Forest

Kate is close-mouthed about her history, and there has been little in the way of enquiry. She grew up in England, obviously, and has talked somewhat of living in London, as well as mentioning that her mother was that city's shaman. She believed that her mother was deceased - and that she was required to inherit Marion Lane's shamanic connections, hence her initially adopting the codename of "London Reign".

However, since coming to Paragon City, Kate has realised that this is untrue; the voices that speak to her come not from her homeland, but from Dark Astoria. This means two things to her; firstly, that her father was almost certainly the shaman of Astoria, and is almost certainly dead. Secondly, it means her mother may still be alive somewhere.

Burning the night like the dawn "
- Garth Brooks, The Red Strokes

Since coming to Kings Row, Kate has spent most of her idle time in the bar Skid Row, or with its other denizens, including in particular its owner Backbeat and her close friend, Wayworn. Through them, she also has loose affiliations with some Project Corona members, mostly in the process of working as a hero. She's also worked numerous times with The Rose Paladin, though his incredibly lawful and upstanding attitude grinds on her more violent and rebellious manners.

"Someday... I will wear you down

Someday... you'll let me hang around

And I will not cave in until you shout my name

Then I'll look out upon the rooftops like a lunatic and do the same..."
- Captain Tractor, Someday

Kate has a particularly close relationship with the shaman of the Row, Wayworn. From the first, she made no secret of her interest in him, though she treated it with the same bitter humour as most opportunities. There seems to have been a breakthrough at some point; it's entirely possible that by this stage, she has simply cut through his wibbling and pinned him to a bed somewhere. Kate doesn't like taking "no" for an answer. 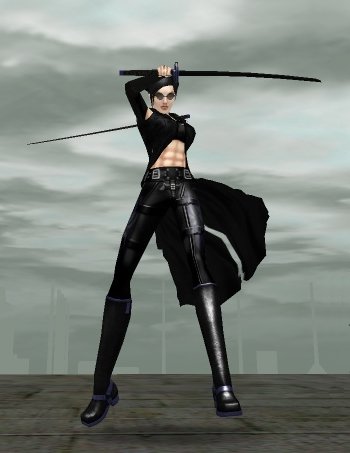 "There's no better cause for hope than anger. As long as people are angry, we will make things change. When we stop being angry, when we become not happy but content - that's when it's all over."
- Nightfane

Not unlike Harlem, Kate has shamanic powers relating to certain parts of the world. Though she initially believed that these powers were an inheritance of her mother's shamanic powers, it seems now that they are in fact drawn from Dark Astoria, Kate's true shamanic home. As such, her magic relates to darkness, in the "underworld" sense of the word rather than the illumination or "negative energy" interpretations.

Outside of her powers, Kate has a smattering of general life-skills with no outstanding focus. She does, as Harlem was surprised to discover, have a nice singing voice.

"They seem well made. Are they authentic, or reproductions?"
"Physical representation of existential teenage angst and shamanic power fuelled by the rage of a dead city, actually."
".."
"That one's always a conversation killer."
- Kate explaining her swords to a teammate

Kate's equipment - if it can be considered as such - is a pair of katana-like swords rendered entirely in what appears to be polished black stone. Kate is quick to dispel any illusion that they might actually be such a substance, however - as she comments, they are unreal items, formed of her shamanic powers. The same can be said for the pair of overtly gothic, bone-framed wings she sprouts when she has the need to fly.

"No. Not even in the face of Armageddon. Never compromise."
- Rorschach, Watchmen

Kate always seems to be in motion, thriving on action in opposition to contemplation. This means that when nothing is going on, she gets frustrated easily - short-tempered at the best of times, she can be genuinely obnoxious when her patience is being tested. Her combat style also follows this ideal, gaining strength as the battle goes on. In turn, this does mean that when a fight first begins, she's slow off the mark - she needs time to build momentum before she's truly effective. You could say she has a solid top speed, but poor acceleration.