A Polish national hero of Jewish extraction, Old Gray Soldier is a veteran of both World Wars, a survivor of the Holocaust, and a longtime anti-fascist fighter. He has spent his career battling the evil of the Nazis, Communists, 5th Column, Council, and Arachnos. His recent encounter with a Kronos Titan has, however, forced him into semi-retirement.

Due to his solitary nature, OGS is not directly affiliated with any particular heroes, though he works quite a bit with heroes, particularly if they are fighting the Council or Arachnos. He has, however, recently begun tutoring a young heroine by the name Overcast Sky, a girl strangely familiar to him.

Supergroup: The Grey Veterans of Paragon

His personality matches his moniker: gray. He is a rather grim man, though polite. He is a soldier first, and behaves as such. He has been known to crack a joke or two during combat, though at times they mistranslate from the Polish and fall flat. He is quick to anger, controlling it through sheer determination. He does not suffer fools gladly. Interestingly, he has a phobia about teleportation, and believes that running never hurt anyone.

Stephen insists that most of his abilities have come from a century of training as a soldier, though most who have treated his numerous injuries would say that his 'treatment' by The Good Doctor at Oscweim certainly increased them beyond normal levels. At the very least, it explains his curious longevity, as he was born in 1896!

There is little doubt these abilities ARE natural, developed over time from a variety of fighting styles emphasizing leg kicks and cuts, though he utilizes rapid hand punches as well. His legs, broken many times, are not as efficient as they used to be, and he often requires the use of 'blues' to maintain his endurance, a fact that he hates.

OGS argues that his reflexes are from his natural instincts. While he DOES have great natural skill, most researchers argue that they have been enhanced to levels beyond normal. His ability to anticipate attacks and dodge them have allowed him to survive in fights that may fall lesser men; at times, he has been known to 'elude' attacks long enough to take out foes far greater than he. However, this often leaves him drained and feeling every bit his age.

Masyadkowski has to admit that THIS ability is a 'gift' of The Good Doctor, and though it comes from evil, he finds it useful. Due to his altered body chemistry and musculature, he is able to move at speeds beyond those possible by a normal man, at times reaching speeds that make him virtually undectable by the human (or other) eye. Unfortunately, due to the numerous broken legs he has suffered over the years, his speed is far less than it used to be, a fact that he struggles to accept. Note: OGS has recently developed a set of 'Rocket' Boots that have allowed him to regain some of his lost speed. While a bit ungainly, they serve a purpose.

As he ages, Old Gray Soldier has recognized his need for help in maintaining an acceptable level of ability to deal with everchanging threats beyond his traditional fascist foes. As such, he uses a variety of seized and invented equipment.

'Rocket' Boots: The plans were seized from the remains of a dead Rikti. The boots themselves have allowed OGS to regain the speed that has slowly declined over the past two decades. They also provide some flight boost to his Jet Pack.

Sky Raider Jet Pack: This pack, taken from the defeated Colonel Robespierre, allows OGS to travel locations that may limit his use of Super Speed.

Crey Freeze Pistol: A souvenir of his defeat of his own cloned Paragon Protector, OGS wears this pistol at his side, a last resort weapon.

'Laser Vision' Lenses: discovered to be the source of the villain LaserShot's powers (rather than the purported mutation the villain claimed), these lenses, which come in both contact and glasses form (in a mixture of styles; it seems as though LaserShot was a bit picky about his eyewear), allow OGS to attack his foes from a distance. Generally, the shock of the sudden burst of light and heat is enough to rattle the defenses of enemies. While the lenses take some getting used to, and the contacts are particularly tricky, OGS has found them useful!

Electron Armor Suit: Due to life-threatening injuries he suffered in battle against a Malta Kronos Titan, OGS is currently forced to wear a suit of armor that supports his shattered frame and provides assistance to his torn muscles and punctured lungs. It is a situation that he hates. It has led to his own semi-retirement. 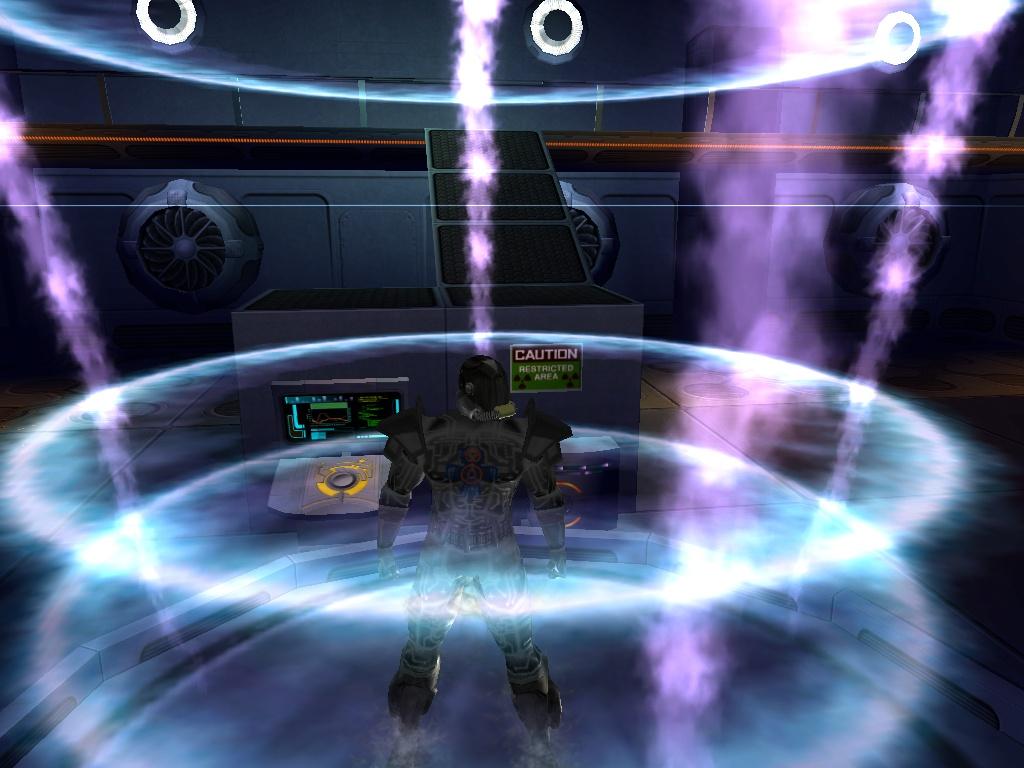 Stephen Masyadkowski was a survivor. He was born in 1896 to secular Jewish parents in the Polish city of Czestochwa, at a time when Poland was divided between Russia, Prussia (Germany), and the Austro-Hungarian Empire. Czestochwa was in the Austrian territory, a hotbed of Polish nationalism, and Stephen was raised a proud Pole. When duty called, however, he enlisted and served in the First World War as an messenger on the Eastern Front, rather quickly rising to a high NCO rank in the Austro-Hungarian Army. (Interesingly, he encountered an odd, fervent little corporal, a fellow messenger, sharing a beer with him in a no-name beerhall. Stephen sometimes regrets that otherwise forgettable encounter).

After the war and the defeat of the Central Powers, Poland became a nation once again, and Masyadkowski served in the Pilsudski government as a military advisor. When Germany invaded in 1939, Stephen became part of the Warsaw underground, enventually assuming a leadership role in the Warsaw Home Army (Warszawski Korpus Armii Krajowej) and helping to organize the Warsaw Uprising of 1944. When it failed, he was captured and sent on to Oscweim, the notorious camp better known as Auschwitz.

Masyadkowski had three strikes against him: he was Polish, he was Jewish, and he was a soldier. When he arrived at Oscweim, he was processed and seperated from the other new arrivals and sent to the secret Military Experimentation Wing of the Medical Division at Birkenau. There, he was subject to horrific endurance tests and drug testing aimed at determining the limits of human ability. The Good Doctor who performed the cruel experiments sought to find a way to create a super-soldier, and wanted to perfect it on the Untermensch, attempting to determine the role that heredity and genetics would play in human ability. The Untermensch, after all, were expendable, particularly if they were despised Juden. Eventually, Stephen escaped when his guards, in the process of transporting him for 'processing,' turned their attention away. He broke their necks and fled, hiding, in pain and shock, until the end of the war.

After the war, ashamed of his actions upon his escape, Stephen became a dedicated Nazi hunter, responsible for a number of high level captures...and a particular execution in Brazil that was reported to the public as a drowning in 1979. He met his wife Susannah in Warsaw, during the efforts to rebuild. She was a dedicated Communist, and often clashed with her husband over the direction of Poland as it wavered between East and West. When Poland went Communist, Stephen left Poland and went into exile, refusing to take part in a Polish government that oppressed its people, though he remained a patriot. While in exile, he spent years hunting out 5th Column and other fascist and communist threats all over Europe..though he never challenged the Polish government itself. His wife, who divorced him soon after his exile, raised their son Francis to be a proud, Communist Pole. Francis idolized his father and followed in his soldier's boots, though there was little contact between them. They had a falling out in 1968, and have not spoken since.

Hunting Arachnos as His Alter Ego

During his time out of Poland, Masyadkowski became known as the Old Gray Soldier, for both his skills and his personality. The name has since stuck. He is recently arrived in Paragon City on a diplomatic visa, though his activities since 1979 are unknown to most. It is believed that he sought to infiltrate both the 5th Column and its Council successor, as well as the fascist Arachnos organization. It is reported in high levels among organizations with no initials that he has successfully played the role of a Bane Spider Commandant named The Gray Web, secretly working within Arachnos to bring down the organization and end its horror. For some reason, he has since resumed his identity and left Arachnos, though he sometimes resumes his 'villainous' persona in missions against Arachnos and the Council. It is believed that he is seeking to paint The Gray Web as either a Rogue Arachnos (during his encounters with the spiders), creating dissent within that monolithic entity, or to start a war between the Council and Arachnos by invading Council bases in Arachnos garb. Whether his efforts will succeed remains to be seen. 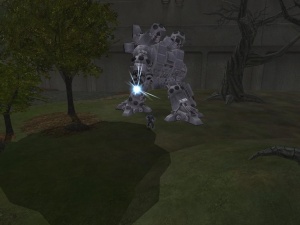 Battling for his life against a Kronos Titan

His recent efforts at infilitrating local fascist organizations caught the attention of the mysterious Malta group, an organization with fascist tendencies of its own. While responding to a reported 'secret' 5th Column meeting he learned of within an attack on a Council base, OGS was attacked by hundreds of elite Malta sappers and gunslingers. It was a trap, a 'preventive' strike on OGS before he attempted to do to Malta what he has tried to achieve with Arachnos and the Council. While he defeated the onslaught of Malta, barely, he fell under the assault of a Kronos Titan. Human flesh, after all, is nothing to a robot as large as a small mountain. Left for dead, OGS was airlifted to a Freedom Corps lab, where he was pieced back together. His wounds are such that for the next few months, he must wear an Elctron Armor Suit to compensate for his shattered bones, torn muscles, and crushed organs if he wishes to continue in the field. It is a situation he despises, having to wear armor and rely on technology..but the evil he faces never rests. Recent difficulties with breathing, perhaps as a consqeunce of his injuries, has led to his semi-retirement.