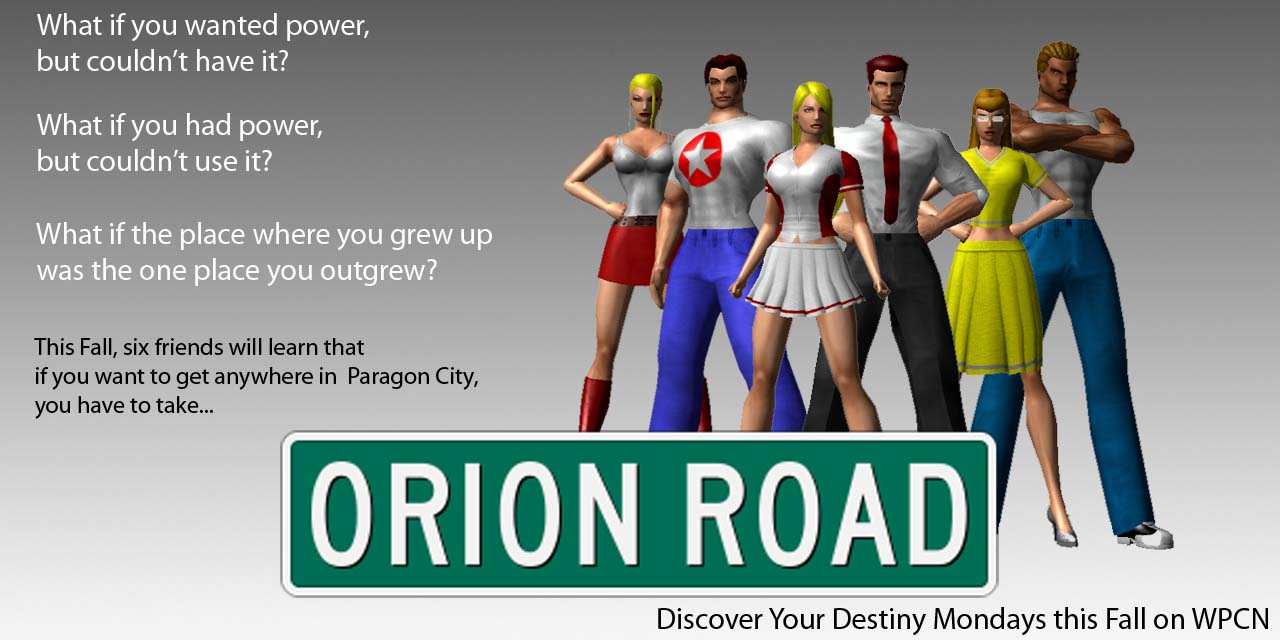 Orion Road is a hugely popular prime time teen drama that airs on PCN's Monday night lineup. The show tells the trials and tribulations of 6 childhood friends who grew up on Orion Road, a street in the Gemini Park area of the Galaxy City neighborhood of Paragon City which is traditionally known the delineation between the wealthy and poor neighborhoods of the area.

Kyle Harrington (Stance Jennings): The youngest member of one of the city's oldest and most influential families, Kyle is uncertain if he can fill the shoes of his superhero father, Mister State. He's particularly concerned that despite the fact his parents are both superheroes, he has yet to show any powers. In Season 2, he began actively pursuing a political career, and became the unlikely alderman for Galaxy City at the end of Season 3, but only after entering an uneasy pact with the Family.

Jeff Cutter (Alan Cooper): Born to a poor family that despises superhumans, Jeff is never the less Kyle's closest friend and sometime rival for the affections of Clarisse. When he turned 16, he began to exhibit the ability to control flame, a mutant ability he has been careful to keep from his staunchly anti-mutant parents. His sister, Jenny, discovered his powers during the cliffhanger finale of Season 2, and has thus far kept his secret safe, but there's no telling when or if she'll choose to 'out' him.

Clarisse Stalwart (Rebecca Sinclair): Beautiful and talented, Clarisse was the most popular girl at Paragon Central, the high school the characters attended for the first season of the series. Clarisse has had several boyfriends, including Kyle (her current boyfriend) and a brief fling with Jeff (during sweeps week in Season 3). Clarisse's mother was killed by a super villain, and as such tends to be wary of people with metahuman powers.

Jenny Cutter (Lauren Edwards): Jeff's younger sister, Jenny is cunning and manipulative, determined to rise to a position of wealth and power in Paragon City despite her family's poverty. Jenny has broken almost as many alliances as she's formed, and she's made it painfully clear that she only looks out for herself. Still, she can be unpredictably kind when the mood strikes her, making her an audience favorite as the "bad girl you love to hate".

Tyrell "Ty" Burke (Randall Fox): Jeff's childhood friend from the wrong side of the tracks, Tyrell had a difficult time adjusting to Jeff's new, upscale peer group in high school. He and Kyle have traded blows more than once, although they have been able to make an uneasy friendship. He's nursed a crush on Jenny since they were kids, and in Season 3, even spent time in jail when he claimed that a dose of Superdine found in her car was his.

Audrey Jackson (Melissa Feldon): Smart and sassy Audrey was Paragon Central's valedictorian and editor of the school newspaper, the Observer. She was included in the group by virtue of being Clarisse's best friend from grade school, and her book smarts have helped them out of a jam more than once. In season 3, during her internship at the prestigious newspaper The Paragon Sentinel, she began researching a story on the Family, and, during the cliffhanger ending, uncovered Kyle's involvement with them.