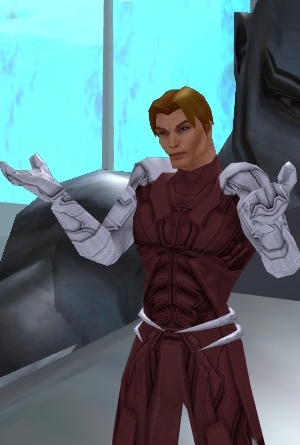 Sean is, aside from his powers, average. Having grown up in Paragon City he often idolized Heroes[1], as many of the youth in Paragon City do. He often wished to become a hero and help those in need, but refrained from doing so due to pressure from his parents to repress his abilities[2]. It was due to this tendency to idolize them that his arrest by the Hero[3] was all the more crushing. During his time in the Zig he came to the conclusion that, although their purpose was pure, most heroes were only in it for themselves. Even now he views most heroes with some level of distrust, despite his heavy involvement with the Reciprocators and other hero groups[4]. Of course, he still seeks to prove that he can, in fact, do good with his powers. This is both to redeem himself in the eyes of Paragon City, and also to rub it in the face of his parents[5].

While his control covers the entire spectrum of natural energy, Kinetic energy is the only type he can safely use. He does not possess the natural ability to control sound. His attacks, although certainly sound based, are the result of him multiplying the natural kinetic resonance of sound as it travels through the air several thousand times[6]. The other energies[7] remain unsafe for him to use.

Attempting to use fire will burn him, while using ice quickly chills his body temperature to dangerous levels. Both ends of the thermal spectrum were tested early on. First was when he was 7, during the winter. In an attempt to warm up, he began gathering thermal energy around him. His jacket caught fire, resulting in a few minor burns and a very bad childhood memory. His experimentation with the cold happened later the same year during the summer. On a particularly hot day he tried the reverse, sending the thermal energy away from himself. The end result was a group of very confused doctors attempting to explain how he had hypothermia while standing outside in the scorching sun.

His lack of control over potential, aka gravitational, energy is potentially very dangerous to everyone nearby. His first attempts to toy with it resulted in his bicycle flying into the stratosphere[8], and him flying several feet through the air and breaking his left arm. His only practical use of this has been is allowing him to jump about[9].

As with the others, electric energy remains unsafe for him to use. While he can direct the flow of the energy it requires a full circuit to work properly. As he's the one commanding it, Sean is included in this circuit. His lack of natural resistance would result in him receiving the same level of shock as any object or person he could direct it towards, as he learned when first playing with batteries[10].

There are a few tricks Sean has that won't outright kill or maim him. The most notable is his ability to heal others. His most common way of doing so is to strip a bit of energy from a nearby foe and direct it to allies or himself[11]. The energy makes whatever wounds the person may have sustained heal at an astoundingly quick rate, though depending on the amount of energy taken it will only heal the wound up to a certain point. An enemy is not necessarily required for healing either, as was displayed when Alison Symnore lapsed into a coma. By manipulating her natural energy he was able to bring her back to consciousness. While promising, this method of healing remains largely untested.