Shekinah Oldsoul is the half-breed daughter of Baduro and Baron Oldsoul of the Circle of Thorns. She was rescued and adopted by Elrich Jericho, (more specifically his third iteration) before the mystic group could implant a demonic soul into her.

During her very early childhood, Shekinah was raised by Third Feign during the pre-rikti days of Paragon City. This makes her familair if not particularly friendly with the Freedom Phalanx. In particular, she is still friends with the Dark Watcher.

Her powers manifested just before the Rikti invasion, and though she attempted to aid the heroes of Paragon in warding them off, she was forcefully stopped by Feign. In the heat of battle she was sent to the Willworld. Particularly, she was sent to the Citidel of Ice and Flame to live amongst the Empire of the Forsaken. During her time there, she was able to hone her powers to levels unimaginable on Earth.

When she reached adulthood, Shekinah chose to return to Earth in search of Feign. Her skills with reality manipulation were strong enough to protect her from the reality maelstrom that follows any traveler to or from the realm, though her powers became frighteningly dampened on earth.

Shekinah founded the Willworld Exiles, became a model for the "Exotiq" line of fragrences (even after learning that it was part of a Ghost Widow plot) and became the Willworld liason to the Vanguard, the Menders and the Midnighters.

Currently, Shekinah is a member of the Sapphites. Her long line of involvement with morally ambiguous and sometimes outright villainous endeavours has her unter an eye of suspicion with reguard to Freedom Corps and Longbow. Though in the public eye, she's still only occasionally recognized as 'the Exotiq girl'.

Charismatic, but slightly stoic. Shekinah rarely smiles, but when she does, there's a glow to it that isn't due to her powers. Her stoicism isn't due to unhappiness, but because of an upbringing that focused on formality and ritual. At times she can even be a bit aloof, though not based on physical appearance. In fact, most of her previous lovers have had features considered disturbing by normal humanity.

Though her abilities manipulate reality itself, many of her powers are still classified as illusions for their heavy psionic component, and others considered Sonic their resonant properties.

Skilled in dancing, fencing, singing and acting. Has shown some skill at the invention table, but nothing truly groundbreaking.

Long Range teleportation devices (attuned to the Pocket D, the Sapphite Base, many various Wentworth locations and to the Ouroboros anchor) Wide area teleportation reciever capable of teleporting up to 7 people to a location. A mint condition Nemesis Staff... It doesn't look nearly as abused as some that heroes have taken, almost as if it was made for her...

Shekinah often begins combat by calling her personal bodyguard from the Willworld and using resonant powers to strengthen him and using her other reality warping to guide combat to her whims. If combat is moving too slowly (or if she's just bored), she charges into the fray, taking advantage of her surprising strength and resiliance.

When faced with especially tough groups, she calls a team of Echoes from the willworld to harass the enemy, or even simply frighten them into submission. when her full range of powers are brought to bear, chaos ensues. Solid forms become fluid, armor becomes putty, and portions of the physical plane may even get transposed with the Willworld itself. When faced with such obsticles, few opponents can survive for long, but the risky nature of a full release of her powers ensures that she does not do it lightly. 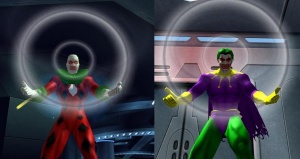 Even in her Prime Reality form, her coloring changes according to mood

Shekinah has never had to shop for clothes, instead using her powers to create her costumes on the fly. If her powers are completely supressed, she's left naked as a result.