On July 4, 2002, the youthful Rikti trooper known as Jak'Tir set foot upon the safezone that was Cardiff, believing the forward troops had captured and held the line, as their transmissions had shown. Immediately upon arrival, his destination proved to have been compromised: Vanguard troops had captured the area and submitted false transmissions of safety to the other side of the portal, which was still active. Jak'Tir and his troops were cut off from communications by an expertly engineered jamming device and forced to rely on limited provisions as the 100-strong troop fought against the encroached Vanguard menace. Slowly but surely, the battle was becoming a struggle. The Vanguard madmen were set to dispatch his allies on their first day of deployment, infernal weaponry chugging away at their armor. It welled inside the trooper's mind as he was seemingly struck down by an armor-piercing round, slumping to the ground. His life signs were nil, and the mental network no longer detected him; presumed a casualty, the war waged around him without time for mourning. After half a day's onslaught, Jak'Tir turned the tide: Unexpectedly rising from beside a fallen comrade, he wielded a plasma rifle in each hand and went dashing through the Vanguard troops like a madman, guns ablaze; despite their training, he proved an unstoppable menace, though survivors would swear the fell beast that set upon them that day had been struck by dozens of rounds more than capable of eliminating a single Rikti trooper. Eventually discarding his plasma weaponry in favor of a Vanguard-issue beam-sword issued to a heroic cadet, Jak'Tir cut down the remainder of the platoon (now only comprised of a dozen heroes and a handful of troops) with his squadron's last men backing him up. During the climax, the heroes decided to focus fire on the unholy demon that'd struck down so many of their men, rushing him with vengeance in their eyes. With a descent into a martial trance, Jak'Tir would never recall what swordsmanship had ultimately been his victory, though he snapped from his daze bathed in the blood of dismembered and disabled heroes. A scarce few demoralized Vanguard soldiers survived, fleeing the battle to spread the tale.

Jak'Tir's superior combat skills made him a force to be reckoned with; despite unmeasurable force the enemy leveled at the trooper, he simply couldn't be taken down. Following various successes in England, his superiors placed a request on July 28th for his transfer to the struggle in Paragon City. Heroes had been inflicting casualties left and right, so any prodigious troop was being plucked out for the struggle. Using a recently erected portal, Jak made his way through to Paragon's sewers. Beneath Baumtown, the Rikti had held a cache in secret for months prior to the war, having already prepared for their onslaught. It was here that he landed, receiving an official field promotion shortly thereafter for both extraordinary services rendered in the war effort...and because the soldier who'd previously been leading the unit, as well as the majority of his chain of command, had perished in a vicious assault by their most hated, baleful opponent: The Statesman.

Though feeling somewhat out of his depth, the young now-commander accepted his responsibilities with grace. Following tactical assessment of the situation, he decided that their best course of action was to attempt breaching the surface and regrouping with the fighting force above, which would mean traversing the Baumtown sewer system. Though an alternative to this was retreating deeply into the system and meeting at another primary base, Jak'Tir felt this unnecessary: Along the path to Baumtown's surface was an established checkpoint maintained by a scarce few heroes who felt it was more important to guard civilians who'd fled into the subterranean tunnels than to fight in the war as a whole. Though the cunning commander could understand and even (loosely) sympathize with their decision, he knew what this provided him: A way out. Ushering his troops onwards, he let their drones lead the charge; the beady-eyed airborne units scrambled, firing their plasma beams indiscriminately into the crowd. Heroes stumbled over one another to keep the civilians from the firing line as Jak'Tir led his platoon into the defenders, giving the kill order.

The battle was short and decisive. The supergroup which had elected to remain behind seemed to have made a critical underestimation of the Rikti presence still in the area, having left some of their more inexperienced heroes on their "guarding" task, believing it to be a safe zone with the fighting on the surface and in the city.

The lack of survivors showed otherwise.

As those under his command saw the light of day once more, they came to appreciate their commander, readily obeying as he ordered them to form up. Baumtown was going to be theirs, he had decided, or at least a sector...and no hero was going to stop them.

And they did. Holding their ground for several months, his forces kept the heroes and Vanguard at bay, preventing their entry into Baumtown with surprising effectiveness. It was to be a staging area for some of the Rikti's plots, and this, Jak'Tir believed, would be sufficient.

"Are You: Abandoning: Your Position?"

-Jak'Tir and a Rikti Commander shortly before being cut off. 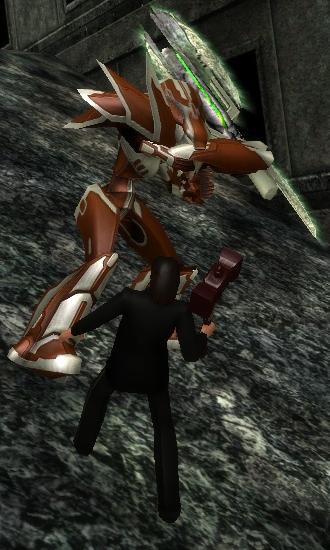 Jak'Tir poised to create a division at a hero's waist.

Though Jak'Tir persisted in his efforts to claim Baumtown for the Rikti effort, heroes in turn continued doing what they did best: Swooping in to save the day. Though their anti-climactic deaths were as consistent as their arrivals, the commander knew all too well that their casualties would eventually become too great. Tactfully, he waded his way back through the mostly abandoned battleground, fending off the occasional kamikaze hero with his platoon. With casualties of nearly fifty heroes to their name and unknowable Vanguard soldiers they'd brought alongside him, he felt he'd performed admirably in his work. The last words of a hero whose throat he slit, however, chilled him to the bones.

"Your kind aren't going to last much longer. Once Doctor Science's plan goes over, that portal of yours...the big one...it's gonna go up in flames. And then you're dead. All of you, stranded here. Dying alone."

He paced and pondered, worried and wondered. What could the heroes potentially be planning that could endanger their portal? Despite his strategic mind, he couldn't imagine any methods that'd be short of suicide - and then it hit him.

The human race had been perfectly willing to throw themselves at his forces in the vain hope that some would die, knowing full-well they weren't going to make it through what came next.

They'd come without adequate weaponry, sufficient soldiers...all they'd had was bold determination in their hearts and meager powers to back them up, willingly flying face-first into oncoming plasma bolts just for a chance to down an invader or two. Certainly they had been amongst the most idiotic of their race, but should such a spirit be carried within the soul of every human, and they have found a plan that could succeed...

Eyes widening beneath his helmet, Jak'Tir rushed to establish communications with the force near the homeworld's portal, alerting them to what was certain to be an oncoming force. Before he could do more than that, however, their mental network was disrupted, cutting him off from all but the closest Rikti - those of his platoons. Suspecting the work of Sister Psyche and other prodigious psions, he knew this was not something he could circumvent, and correctly assumed other methods of message conveyance would be blocked. He had only one option: Alerting their main force of the danger himself.

Knowing the task ahead was a daunting one, Jak'Tir gathered all of his men and briefed them on what he assumed would happen: An incredibly large, concentrated force of heroes would rush the sewers, this time with actual coordination, to bash past their soldiers and enter their homeworld, severing the power supply while leaving themselves stranded. With the hurried briefing complete, he equipped his troops, surprisingly, with more gear than himself, stating that he desired to remain "light on his feet." Arming himself only with a simple plasma pistol and the Vanguard sword taken as a trophy from the first hero he ever killed, the charge was led into their sewer system. They grew exhausted and weary of the long trek, but Jak's predictions proved alarmingly correct: Any portal they'd had to navigate back to the primary base had been shut down by means unknown, presumably an invisible infiltrator, and they hadn't the time to make repairs should the humans be attacking soon.

His fears seemed quelled upon arrival. No heroic presence was seen in the chamber, and his rushed effort made him feel quite the fool. Questioning current activity, he received the news that the heroes had attacked elsewhere, attempting to slaughter their troops with brutish force.

As thousands of reinforcements strode through the portal, well-equipped and ready for the conflict, he felt confident once more. Their victory was certain in the wake of such odds; not even the Statesman could withstand them forever. With such a belief he finally drew his blade, making to eagerly join the troops against their disgusting resistance...

And that's when it hit him. Just the merest flash in the corner of his vision, but he saw it.

Turning with a screamed, strangled battle-cry, perhaps cracking beneath the stress, he fired bolt after bolt from his plasma pistol as a secondary, much smaller team of heroes faded into view, now so very close to the portal they relied upon. A bolt struck Hero 1's cape, scorching the ends, though the hero didn't pause. A tiny teammate looked over with an expression of mild alarm, teleporting to the man and grasping his shoulder. Whatever small damage Jak'Tir had inflicted, if any, was instantly repaired, the only remaining evidence he'd ever made a mark being the tatters on the British hero's cape. Still screeching to alert his comrades to the true threat, he charged, pouncing at the heroes...all too late. The fighter known as Ajax was restrained by a stasis ray, but the crazed commander paid him no heed, seeing all too well what was happening in front of him: Hero 1 disappeared into the portal, and the heroes were moving after him. Lost in the confusion, the medical miracle Jak'Tir had just witnessed was brushed aside, forced to teleport almost constantly to avoid being struck by frenzied plasma blasts aimed towards him. He seemed to have no direction to it now, and Jak took advantage of this when he appeared in front of the commander. Wielding his superior strength against the man, he crushed him to the ground as troops swarmed past, going after Omega Team.

In his mind, all was silence, though the Rikti nearby were yelling, Ajax's own cries and that of a few restrained heroes nearby intertwining in a confused mixture. He knew that they were damned, somehow, despite the force of thousands against fifty.

Jak'Tir looked down at the man held in his grasp, the two of them obscured from the notice of any by rushing soldiers.

"TELEPORT: NOW! OR YOUR LIFE IS: FORFEIT ALONGSIDE MINE."

-Jak'Tir and The Pop-Up Medic

And in a flash, they were gone.

Not ten minutes later, the portal's explosion rocked the underground, burning the Rikti alive and leaving the man assumed to be the sole survivor, Ajax, behind.