X is cocky and cynical, a wisecracker with a dark and ironic sense of humor. While capable of maintaining military discipline, he tends to speak and act boldly, even recklessly. This has gotten him in trouble on numerous occasions. He is deeply concerned with personal honor and redemption, but usually hides these feelings (and others) behind a protective shell of jaded indifference.

X considers himself a soldier, not a hero. When hard decisions need to be made, he's the one to pull the trigger or call in the air strike; but he's never tried to duck responsibility, or asked anyone for a sacrifice he wouldn't make himself in their place. He both envies and resents heroes who are somehow able to "take a third option" and have it all come out okay.

X is an ordinary human in excellent physical condition. He has no metahuman abilities and is still rather proud of that.

Like all members of Vigilance, X has special forces training in survival, tactics, and unconventional warfare, with an emphasis on combatting super-powered threats. He also received basic infantry training and is a veteran of the Rikti War.

X has training and experience in the use of his jet pack and is capable of complex aerial maneuvers. 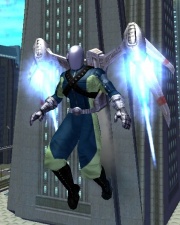 Some of X's gear is standard issue for Vigilance (either retained from before his incarceration, or since "liberated" from his former comrades). Other items were purchased from Freedom Corps, Future Dynamics, and even iCon.

X carries a fairly common M4 carbine with the M203 grenade launcher attached. In addition to standard 5.56 NATO ammunition and HE grenades, he also carries some non-lethal ammunition and several special-purpose grenades, including buckshot and incendiary rounds.

Simple but time-honored and effective, these haven't changed much in the last five hundred years.

Easily his most expensive and tempermental piece of equipment, but worth every penny.

X carries this paperback-sized diagnostic scanner and tissue regenerator to supplement his own training in battlefield medicine. 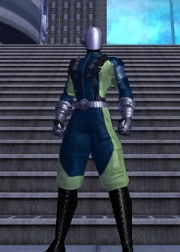 X has replaced his old Lockhart Aerotech "Raptor" jetpack with these compact and powerful boots. It meant learning to fly all over again, and the boots don't have the same endurance as the pack, but they're less awkward and allow maneuvering in much closer quarters.

This semi-autonomous device is programmed to hover over X's shoulder and paint targets with low-power lasers, transmitting its data to his HUD.

X began his heroic career wearing his Vigilance uniform, as a symbol of what he was and was trying to make up for, but made several modifications to it. First was the addition of "safety stripes" to make it easier for others to visually distinguish him from regular Sky Raiders. Next was a phase-changing outer coating which can switch from transparent to opaque black for night and stealth operations. The helmet was replaced with a similar but fully sealed model, with a partially-mirrored facebowl as well as an integrated comm system and HUD. The uniform itself is made of an advanced material, fireproof and very durable, which helps to disperse impacts; it includes trauma plates over vital areas.

In 2011, having completed his personal quest for redemption, X adopted an all-new but similarly styled uniform. Based on standard Vanguard body armor, some of its components are reverse-engineered from captured IDF tech.

These grenades burst on impact to spray the target with a fast-hardening (and very sticky) fluid polymer.

Even with his gear and training, X is a human on a super-powered battlefield, and can't take the hits like better-protected metahumans. This doesn't stop him from trying, and he sometimes gets in over his head.

X is a loner; his experiences have left him reluctant to trust others, and his year-long solo campaign against the Sky Raiders taught him habits that are hard to break. He works best with small groups and those with military backgrounds.

Jay Thomas Bradley was the latest heir to a family tradition of service; his grandfather fought in Europe and his father served in Vietnam. Two days after his eighteenth birthday, he took the oath to defend his country against all enemies, foreign and domestic. In the booming post-Cold War 90s, there seemed to be more of the latter than the former.

Jay was one of many in the armed forces troubled by the military's increasing reliance on heroes. "Smaller, cheaper and more mobile" was the order of the day from the Pentagon, and metahumans were all of those things; some were as powerful as tanks, with a fraction of the logistical tail. Corporal Bradley jumped at the chance to join Project Vigilance and help prove that real soldiers, properly equipped and trained, could stand up to anything the supers could.

The Rikti War gave them that chance. They held the line, but at a terrible cost: roughly 85% of the unit was KIA, MIA, or disabled. When the heroes got most of the credit for stopping the invasion, and the word came down that the Vigilance survivors, all battle-hardened American patriots, were going to be put under United Nations command, it was the last straw. The entire unit (what was left of it) just vanished. When they reappeared, it was as lords of the skies, striking down any heroes who dared to challenge them.

At first, Jay - now a full "Wing Raider" - was a loyal follower of Colonel Duray and his ideology. When the heroes banded together and rounded up the Sky Raiders, it was the Colonel who busted them out of jail. But as weeks and then months passed, things began to change for the Raiders and for Jay. They took on mercenary work for some pretty unsavory characters. New recruits who'd never been part of Vigilance soon outnumbered the veterans, especially in the rank and file. In Paragon City, it became harder to distinguish their activities from any other (exceptionally well-armed and equipped) street gang. Jay began to wonder what they were really fighting for.

His breaking point was when his squad was ordered to fire on a hero running from some Fifth Columnists. His grandfather got a Purple Heart fighting the Nazis, and the thought of being on the same side as them was just too much. Jay refused to obey the order and was harshly disciplined for it by the Colonel himself. He deserted (again) the next day and turned himself in to the authorities. Someone must have put in a good word for him, as he was paroled after serving only two years and allowed to register as a hero, so long as he reported regularly to his parole officer. His parole ended in 2008.

Jay knew he would never be able to serve in uniform again. With no family name or honor left to him, he chose to be known simply as "X" - anonymous and unknown. As a lone vigilante, he started out by taking down Hellions, Skulls and especially the Fifth Column, but his real goal was always a confrontation with his former comrades. Only by fighting what he used to be did he hope to find some kind of redemption, or at least satisfaction.

Thao Ku changed all that. The martial arts master saw past the ex-soldier's bitter bravado to the wounded spirit within. He sent X into the sewers to deal with some Thorns; when the man returned angry, claiming that Thao had tried to get him killed, Thao calmly replied, "I did not say you had to go alone." With this and other lessons, Thao patiently taught Jay that the martial arts are not merely about blows and takedowns, and helped to set his feet on a better path than simple revenge. Even now, Jay calls Thao master and spars with him when their schedules permit.

Now that he had the necessary tools and security clearance (and his head on straight), it was finally time to take on the Sky Raiders. He waged a personal war with them for most of a year, hunting them from the shadows and blowing up their expensive equipment, even rescuing General Aarons from their clutches on one occasion. He harried them from Independence Port to Striga Island and back... but eventually, he had to admit that it wasn't working. Colonel Duray was out of his reach, holed up at a base somewhere in the Etoile Islands, and the Raiders' mysterious backer had very deep pockets. It seemed hopeless.

Needs of the Service 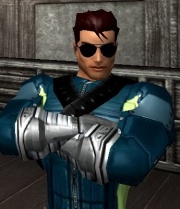 Jay without his helmet

At this low point, General Aarons came to Jay with an offer. He could keep wasting his time and skills, or he could become part of a new special unit being formed to investigate and neutralize a threat that might have compromised metahumans at the very highest levels. This unit, Sanction Omega, would be made up of members of various services as well as a few heroes of sufficiently low security level to be clean... probably.

Unknown to either Jay or the General, the mysterious Director of the project had a very different agenda. Upon his arrival, X was immediately placed in command of Sanction Omega; surprisingly, the previous team leader (Lt. Loren "Fiver" O'Donnell, USAF) was quite willing to let him have it. It soon became clear that several members of SO had been deliberately infected with the very biological agent they were supposed to be finding a cure for; X made an angry comparison to Tuskegee. He did his best to maintain a facade of normal operations while the others met in secret to find a real cure and unravel the conspiracy, which they eventually did.

After the Director was exposed and defeated, Fiver commented on the need for a team of heroes who didn't have a public reputation to lose, unlike high-profile groups like the Freedom Phalanx - people who could and would risk everything if they had to. X replied with a smile that he just happened to know the perfect team, one with some experience in that sort of thing...

Once More Unto the Breach

One fateful morning, Jay got the call. The enemy that nearly wiped out his old unit had returned, more dangerous than ever.

Sky Raider X has been seen fighting the Rikti in the streets - sometimes with fellow Sanction members Fiver and Combustress, other times solo - and in the War Zone. He seems to have overcome his earlier dislike of working with Vanguard, at least for the duration of the crisis.

Many people didn't know what to think when someone wearing X's unique variation on the Sky Raider uniform was seen leading other Raiders in daring daylight robberies and attacks. With his parole revoked and a warrant issued for his arrest, Jay had to go underground again to clear his name. His search ended with a dazzling aerial battle over Independence Port between him and a dozen identically-costumed foes. Afterwards, Fiver and General Aarons vouched for (but still did not reveal) his true identity. He was cleared of all charges, and was finally and officially a free man.

This incident reminded Jay that he still had unfinished business with the Raiders and their leader. Working with Fiver and agent Crimson, he planned a daring solo operation to infiltrate the Rogue Isles as an anonymous mercenary. It took most of a week, but he was finally able to work his way to within striking distance of the base off Sharkhead Island. With the help of a small group of villains (none of whom knew who he really was), he drew Colonel Duray out and defeated him.