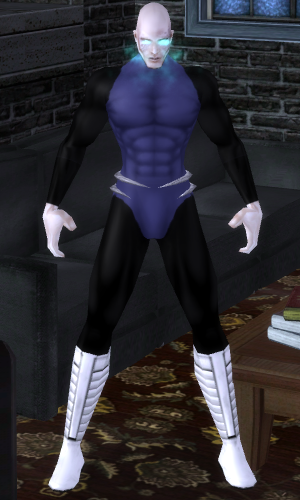 Glenn Garrett didn't particularly love his work -- but it got him paid. His wife and son, they're who he did it all for. Every day he'd clock in at Brickstown Yards, a massive lot of storage lockers almost exclusively rented out by the Crey Corporation. Glenn maintained a security perimeter in the east sector. Most of the time, it was quiet, not many criminals came sniffing around for whatever worthless junk Crey shelved. In fact, Glenn didn't see any action at all until the hero Limbo showed up looking for possessions from his life-before-death. Crey had confiscated Limbo's property due to their acquisition of his corpse, and he was coming to repo it back. Glenn had been trained to deal with heroes -- every goon on Crey's payroll was. He whipped out his firearm and shouted a warning at the trespasser. When Limbo refused to leave, he fired.

Now, Glenn was usually a pretty damn good shot at the range, but this time his bullet went wide of his target. Not long after Glenn found himself tackled to the ground from behind -- mauled by the mysterious specter of a hound. Its ghastly jaws tore into him. He was a goner almost instantly. As Glenn's spirit rose up from his own body, he was shocked to learn Limbo could still see and talk to him. The hero was the real deal -- someone with the power of both life and death. Limbo rushed to help Glenn, manipulating his soul and carrying it with him while he searched for a new 'host.' He was able to place it into the body of a failed Paragon Protector gathering dust in another of Crey's storage units. Glenn was revived! But it wasn't really him. It was just a body there to take his former one's place. It was an impostor. A substitute. A Stand-In.

Glenn, now appearing as a pale, emaciated corpse of a clone, spent the next few days getting used to his new self. When he was finally ready, he made his way home, hoping to be embraced warmly by his family. Unfortunately, they had already gotten the news of his 'death,' and his presence only frightened them. His wife, Hannah, didn't believe the story of his 'revival' for a second, and his continued attempts to convince her only made her more and more fearful for her safety. Eventually, Glenn's brother Gary, who had been consoling Hannah, threw him out of the house. Undeterred, Glenn continued to spy on his former life, and, as a result, was forced to watch as Gary continued to comfort Hannah to the point of developing a romantic relationship with her. He took up a fatherly role for his son as well. Even if Glenn could get them to accept he was still alive, there wasn't anything left for him to go back to. He was gone.

Now cursed with eternity and no one to share it with, Glenn descended into madness. With nothing else to focus on, he began to study what 'unshackling himself' from his original body truly made him capable of. It turned out, he didn't need to remain in any body anymore. He could soar across the astral landscape, possessing new corpses as he pleased. The fresher, the better. Glenn ceased to exist and gave way for his many Stand-Ins. Still, he remained unsatisfied. He knew somewhere out there was a perfect body -- one that could finally give him the second chance at life he deserved. All he had to do was find it... and ensure it died peacefully. After all, there's not enough room in one body for two people.