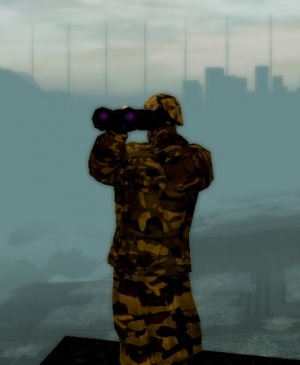 Adrian grew up in a big family and is 3rd child of his four other siblings. His parents & generations before them were all farmers and lived together in a tightknit farming community. Unlike his two family, Adrian wanted to go outside the community and see the world.

By the time he graduated from High School, he realized he will not be able to fulfill his dreams unless he goes to university. Which is not possible given his meagre finances and his parents saw little need to do so as they were content with their lives.

When the US Marine Corps came by town for a recruitment drive. Adrian was amongst the first to enlist in return for a scholarship. After his training, Adrian was deployed to numerous areas of conflict.

His commanding officers eventually took notice of him and sent him for rangers training earning his tab. He was subsequently reassigned to a special forces unit which saw the fiercest combat in various warzones.

Adrian fulfilled his goals of seeing the world although not in the manner he had expected. The unit he was in had a 100% mission success rate until his last mission. Found drifting in the arctic ocean on an ice floe by a eco-activist. The Sea Shepards eventually radioed for help and handed the severely wounded Adrian over to U.S Naval forces in the vicinity.

The rest of his unit were never found and Adrian was unable to recall any events related to this mission. Following this incident, Adrian was pulled from his unit and given leave from active service. Investigations are still underway even after his recuperation.

Unable to return to active service anytime soon. Adrian decided to further his studies in Paragon City. There he learnt of the perils that faced the City and decided to volunteer for crime fighting action in his spare time. Taking on the callsign as Steel Courage.

An ordinary human being with no special powers or abilities. Military conditioning and training has given Adrian a much tougher and stronger physique than most human beings. Although capable of performing extraodinary feat at times, he is aware of his limitations. He constantly keeps himself in tiptop shape to ensure that he will be at his best when the situation demands it.

A gold medalist in hurdle jumping back in High School and never stopped training. His ability to jump over great heights has impressed his military instructors. His ability may have even exceed the best olympic jumper though Adrian is in no hurry to find out.

Adrian's tough and rigorous training coupled with his superb hand eye coordination means that he can hit a target fairly accurately even while moving.

Military training has taught Adrian how to operate most firearms, from pistols to battle rifles and Light anti-tank weaponry.

Growing up in a farm. Adrian has taken care of animals since an early age and have extensive knowledge on breeding and raising most farm animals.

The latest Objective Individual Combat Weapon. Adrian once rescued a scientist from a top secret mission and he has allowed Adrian access to this prototype. An extremely versatile weapon, its capable of single shots, controlled burst, full auto & an alternative firing mode allows for sniper fire. It also incorporates a pump action shotgun as well as a grenade launcher.

This drone will follow the user autonomously. It scans its surroundings, calculate wind speed velocity, bullet trajectories and various other factors to improve the accuracy. The data it process is then remotely sent to the XF-32B - OICW that helps minimize human error and calibrate the shot fired in nano seconds.
Retrieved from "https://virtueverse.net/wiki/Steel_Courage"
Categories: Works In Progress | Character | Hero | Military | Farmer | Male | Secret Identity | Soldier | Natural