Rising, to the Heaven's Light
Just to Plead for Death
Just to be Denied

Before his death, Robert Cunningham was attending Paragon University working for a degree in Computer Aided Design and Drafting. Two years into the program he went out drinking with some friends, it would be his last night alive. While stumbling home drunk he was kidnapped by amateur cultists trying to earn their way into the Circle of Thorns and sacrificed to earn the favor of one of the Circle's patron demonic deities. Unfortunately for both Robert and the cultists, the ritual was terribly botched and everyone involved were killed. While the cultists were devoured by the very demon they sought to please, Robert's spirit was set loose, and strangely enough, still under the effects of alcohol. The loose spirit apparently "passed out" within a suit of decorative armor ordered from the Halloween issue of the preceding year's pottery barn catalog.

Having been discovered by the police and a random hero the next morning, Robert had been moved to the M.A.G.I. offices in Atlas Park once his new nature had been discovered (Though Robert himself did not know this new nature of his until after he recovered from the massive hangover he was feeling). After much counseling, he returned to his apartment with knowledge of what he had become, his spirit was trapped within this suit of armor, and having been heavily intoxicated at the time, had no idea how to get out or even if it was possible. He fell into a deep depression, he dropped out of school and spent the next few months brooding in his apartment.

He contemplated suicide but had absolutely no idea on how to end his existence which became something of a personal hell. The obvious things he missed the most, now being an animated suit of armor, he could no longer eat, sleep, breathe, smell or have sex (The fact that he died a virgin makes the last item sting a bit more than the others). In his words, "Being dead blows". After much meditation, he came to the conclusion that if he could not find a way to die, someone else could, and that someone else would be someone who would want him dead, and to be wanted dead, he would need enemies, and to make enemies, he figured he would become a hero. That day, Robert set forth from his apartment and to Paragon City Hall to be registered as a hero, and the Steel Revenger was born.

Someone said that the dead don't change, I have absolutely no idea who, but I find that to be more and more true as time goes by.

Even after his death, Robert still has much of the same personality traits as he did in life. He is generally an easy going, laid back, quiet individual. Understandably his personality has become more strained and and introverted since the beginning of his, "unlife" as it were. Despite his fearsome appearance, he is easily approachable and engagible in conversation though he is usually not the one to start the conversation. However should the discussion topic shift to something that reminds him of what he lost and what he can no longer do, he'll try to change the subject as best he can in order to avoid discomfort.

He has been known from time to time to become easily angered whenever he feels trapped in discomforting situations too long or confronted about his mission to die. Usually when this happens he'll quickly leave the area and vent, usually by going on patrol and bashing criminal heads in harder than usual. There are some amongst his friends and comrades, that fear for his sanity as they see it being eroded away by his own personal torments and his constant need to distract himself from them.

As mentioned to the side, The Steel Revenger's powers include the standard abilities for a hero possessing the dark armor power set. These powers are manifested by the negative energy projections of Robert's own trapped soul. He likens this to the "AT Fields" emitted by the fictional "Angels" from the Japanese anime series, "Neon Genesis Evangelion". He first discovered hints of these powers on his way to register as a hero with Paragon City, when he was ambushed by a group of Skulls and beaten repeatedly and being "left for dead" in a dumpster. Some hours later, he came back in a fashion that Robert likens to "ripping a band-aid off a really hairy leg really fast, but much worse". The amount of pain varies depending on the severity of how he was dispatched.

Along with his indestructibility, the Steel Revenger has spent some time training with a pair of swords which was given to him when he and those at M.A.G.I strained to find a secondary power set. Special runes (represented by the Celtic bands on his armor) stamped into his armor at strategic locations, allow the Steel Revenger powers and abilities to aid in his duties and overall mission. Runes stamped into the soles of his feet allow him to hover and fly, runes stamped into his arms increase his strength above that of a college age male with only average strength, and runes stamped into the chest piece of his armor allow increased stamina and recovery abilities.

While extremely resistant to most forms of damage, and total immunity to other which could only harm those in possession of an actual physical body, the Steel Revenger is not completely invulnerable. He can be taken out of commission temporarily through the application of tremendous amounts of physical punishment, this can keep him subdued anywhere from half an hour to half a day or more depending on the damage done. Technically a ghost bound to and animating a suit of armor, he has some resistance to psionic attacks, though he can resist attempts to disable him through such a manner (Sleep, for instance). 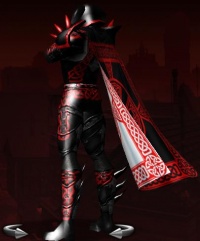 He avoids places and things that remind him of what he can't do anymore, restaurants (eating, smells), mattress and furniture stores (sleeping, touch), erotic stores and merchandise (sex, touch again), etc. To be forced to be around such things for very long is nothing less than torture to him and he constantly keeps these feelings in the back of his mind by constantly keeping himself busy. He has been known to patrol the streets for days on end, and has accumulated an ever growing library of DVD's and computer games. He even went back to school, using his studies as another distraction from his problems.

I will admit, that at first glance, I have it pretty good, however, the drawbacks of my existence so far have greatly outweighed any benefit. I can't live, I can't die, I've become the asshole of the universe, and if there is any way out, I'm gonna find it.

The Steel Revenger's mission which he set for himself is a simple one: Find a way to permanently die. However this has proven time and again to be a task easier said than done as virtually every attempt at his destruction, either by villains or himself has failed. He has not given up and has resolved to continue working his way through the security levels and fighting stronger and stronger enemies until he finds a villain capable of sending him to the Netherworld. Though he could find a way to commit suicide, he feels he must earn his death and not simply allow himself to die, thus preventing an unpleasant afterlife provided he goes down in a blaze of glory defending right. His desire (Some may say obsession) for death may seem wrong to some, but in his mind this is the only thing worth doing with his time and nothing else would cut it.

This has also led him to create a MySpace page* detailing his plight and offers a reward of sorts for the one man, woman, or otherwise who manages to permanently dispatch him. This reward is simply an invitation for the would-be dispatcher, plus one guest to his funeral and the opportunity to make a speech.

Certain restrictions apply, the Steel Revenger must be permanently dispatched without the possibility for any kind of return, there must be at least two witnesses involved in the Steel Revenger's death and evidence must be supplied to both family, friends, and authorities. Upon confirmation of the Steel Revenger's death, the person or thing claiming the reward must submit contact information to the planners of the funeral, the venue in which it will be held, and the cemetery where the Steel Revenger's remains will be buried and where the memorial will be erected. Reward must be claimed within seven days of the funerary services and the party claiming the reward must accept and be fully responsible for any and all risks to his, her or it's person and the persons and property within a ten mile radius of all the events held in memory of the Steel Revenger which may occur due to the claimant simply being there.

The Story So Far

Robert, now mostly under the guise of the Steel Revenger to everyone else but his closest friends, hasn't had much to make note of as he works up through the security levels to find true death. He has yet to make any enemies in the super villain population, though he feels this is because he has not risen high enough in the security levels and gained enough of a reputation to even register on their collective radar.

*The aforementioned MySpace page does not exist outside the City of Heroes/Villains universe.

This is the first character I made which I considered to be my "main". The idea came from the Dwarf Slayers of the Warhammer Fantasy tabletop game. Grim warriors who feel so shamed, they believe that the only way to redeem themselves is to earn a glorious death in battle. The idea of a ghost trapped in armor came from me being a Ghost Widow fan boy, and my tendency to create heroes or villains with humorous origin stories. The rest of the character's traits and such grew organically from there.