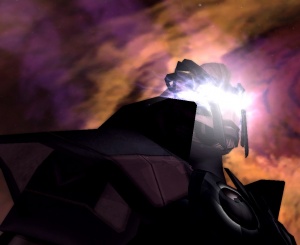 Adrian Lynch was a superhero, even though he lacked any sort of "super power". He kept up in a world full of men that could stop trains by looking at them angrily with only his training and wits. He kept the peace in Independence Port, disguising himself as "The Revenant". Over a dozen ranking operatives of the Council were brought to justice through his actions, and he showed no signs of stopping - that is, until he went after an Archon that had no intention of being captured. The Nictus-empowered Galaxy soldier made short work of The Revenant, removing a good portion of the vigilante's cranium with a well-placed gravitic bolt.

Before Adrian's corpse had even hit the floor, it began moving again. It regained its footing in a matter of moments, extended a single dead arm, and deconstructed the Galaxy Archon at a molecular level. After facelessly watching the nictus hybrid's body tear itself apart in a luminous display of vengeance, the walking corpse lit up, the hole in Adrian's head concealed by a celestial light.

Then, it flew through the roof of the Council base, passing through the solid matter as if it weren't there at all. After it surfaced somewhere in Terra Volta, the corpse hung its head in shame.

Coma Parhelion, an ancient and powerful Kheldian, had failed its most basic mission: to save the life of a noble and courageous human being. It resolved to not let The Revenant die in vain, and has since been hunting down the enemies of humanity and the Kheldians in an untiring, unceasing crusade.

After all, The Stellar Revenant is a corpse powered by the stars themselves. What need has it for rest?

Most of Adrian Lynch's brain was destroyed during the events that led to the creation of the Stellar Revenant, and so, his personality is nonexistent. It did not contribute in any way to the formation of the Revenant's personality.

Instead of forming a gestalt mind with its host, Coma Parhelion's psyche holds absolute dominance over the Revenant. Coma is an ancient, weathered and extremely bitter Kheldian; it holds no trust for the Warshades, and gives no quarter to any "unredeemed" Nictus it encounters. It has no qualms with killing those it deems unworthy of life, and is often surprised when its actions are met with anger by the less lethally-inclined heroes of Paragon.