What to say about Susie-Bot? Of all the characters I've created in City of Heroes/City of Villains, they're my favorite, and I have no idea where they came from. They were probably the fourth character I ever created, started out life as an Ice Blaster (strangely), before I decided to embrace the giant robot cliche' and make Susie-Bot a walking tank.

I think I love them (and they are a them -- as I am endlessly pointing out, Susie-Bot is a boy, while Susie is a girl) so much because they have a great elevator speech: "What if an eight year old built a giant robot, and used it to fight crime?" I would read that comic book.

Susie Jenkins is a typical eight or nine year old girl -- perhaps a little more sheltered, a little more naive, and a little more polite than a modern child. She's precocious, perky, and takes great joy in driving Susie-Bot around. She's also a genius. And not even a little bit genius. She's the kind of kid that may one day destroy the planet by creating an artificial black hole. Except she probably wouldn't, because she's too nice to do such a thing.

Susie-Bot (the robot) has no AI, besides the routines required to simplify control and keep him moving around. Susie speaks directly though Susie-Bot via a loudspeaker. This eliminates any of the usual problems associated with crime-fighting robots (the "What is love?" conversation, or the "do I have a soul?" conversation). However, Susie is eight years old, and will look up almost anything that people say on google. Given the..."adult" nature of some heroes in Paragon City, this has led to some interesting moments.

Susie Jenkins is a genius, particularly when it comes to electronics, machinery, and software development. This genius does not appear to be a meta-ability, but rather just a naturally occurring phenomenon. The kid is just smart.

Like most smart children, Susie is a little alienated, as she is distinctly aware of the difference between herself and other children her age. She is also a bit distant from her parents, as she is well aware that she is smarter than they are (though they are both quite brilliant in their own right). Susie-Bot was not actually created to fight crime -- he was originally going to be a friend to play with for Susie. But when your friend is built out of spare parts from next-generation experimental army vehicles, the crime-fighting thing starts to look like a fit.

Susie's parents elected to keep her with kids her age in school -- she just does calculus while the other kids are doing arithmetic. This gives her lots of time to design improvements to Susie-Bot, and her notebooks are full of crudely-drawn schematics. She has recently developed an ultra-thin computer that comfortably sits inside of standard notebook, and this has allowed Susie to do some coding while at school.

Susie-Bot is a Semi-Autonomous Remote Combat Chassis (SARCC), a tele-operated robotic combat vehicle; essentially, a walking tank. Susie originally intended to operate Susie-Bot via a telepresence rig, providing multi-modal input to the controller via an elaborate array of sensors embedded in Susie-Bot's head. However, this rig never came to be, due to lack of equipment. Susie instead drives Susie-Bot around via a custom GUI implemented on her MacBook (formerly an iMac -- she's upgraded).

Susie-Bot is built out of left-over parts from terminated Army research programs. Robert Jenkins is a mechanical engineer, and spent many years working on next-generation combat vehicles for the Army's Future Force. However, the lack of deployable results led to the program being scrapped, and most of the pieces just fell through the crack. Robert brought them home for Susie to play with, and Susie-Bot was the result.

Susie Jenkins, for all her genius, is a little girl. Susie-Bot's worst misadventures have taken place when she has been naive (underestimating the cruelty of her opponents), or deceived (Susie was once tricked into stealing a sample of another hero's DNA for Crey Industries).

While Susie-Bot is heavily shielded, he has been somewhat vulnerable to Electro-Magnetic Pulses (EMPs) and energy strikes in the past. His reactor is also somewhat fragile, and can be adversely effected by extreme heat and cold.

Susie Jenkins was born in Paragon Heights, an affluent suburb of Paragon City. Her father is an inventor and engineer, and her mother is a Major in the U.S. Army. From birth, Susie displayed incredible cognitive abilities, a talent nurtured by her parents. By the time she was 8 years old, she had mastered several advanced engineering disciplines, mathematics, and physics. However, her language abilities, while above average, lag far behind her talents in mathematics and science.

Susie attends the Richard Feynman School for Gifted Youngsters. Though she wished to begin attending MIT at age nine, her parents have decreed that she remain with children her age. Consigned to this fate, Susie has largely been responsible for her own education for several years. There simply isn't anyone in Paragon Heights that is smart enough to teach her.

Alienated from other children her age, Susie's main arena of inter-personal communication is the Internet. She frequents web sites and message boards devoted to engineering, robotics, computer programming, as well as several sites that follow the exploits of super-heroes. But this limited social interaction still left her feeling lonely. Driven by this loneliness, she elected to build a playmate of her own. 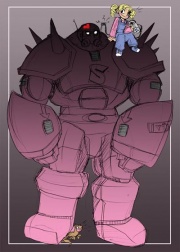 Susie built the first version of Susie-Bot under the pretense of entering the robot in her school's science fair. Over the course of several months, she constructed the robot's chassis (with considerable help from her father's advanced, automated laboratory), and coded the core AI and control systems. She painted the robot bright pink, and rode to school on the day of the science fair on the robot's shoulders.

She won first place, on the condition that she never bring the robot to school again. Weighing over a ton, Susie-Bot frightened almost everyone (despite his cheerful coloration). To add insult to injury, Susie's mother forbade her to play with the robot, and threatened to dismantle him. Only a near-legendary tantrum prevented this, and Susie was allowed to tele-operate Susie-Bot from a safe distance.

With little to do in Paragon Heights, Susie began sending Susie-Bot out exploring, ranging as far as Paragon City (where Susie-Bot could be stored in her uncle's garage). It was on one of these jaunts to Paragon City that Susie-Bot fought his first crime.

Susie-Bot's first apprehension was of two Hellion muggers in Galaxy City. When the police arrived, they suggested that the robot (which they assumed was sentient) register for a license if he wanted to do any more crime-fighting. Susie latched onto the idea, registering for a Hero license and beginning a crime-fighting career of frankly ludicrous proportions.

Susie-Bot has seen it all in Paragon City. The robot has battled the Council, Crey Industries, the Nemesis Army, the Carnival of Shadows...even the Rikti. Susie has interacted with some of Paragon City's greatest heroes (and collected some of their images in a digital scrapbook -- she will often post pictures on super-hero fan boards). However, her stints with Susie-Bot have become intermittent. She has moved on to work on other research (including advanced work in Artificial Intelligence), and she takes Susie-Bot out less and less. The robot is kept in good repair, but spends a great deal of time in her Uncle's garage.

There was once a discussion, perhaps inspired by Marvel's "The End" series of comics, of what "the end" would be for your hero. After some thought, I arrived at what I think was a very honest end to Susie-Bot's story. I was so struck by the question that it has colored all of my ideas about Susie-Bot since.

Susie built Susie-Bot when she was eight years old. One day, she is going to grow up, and no 16-year old girl is going to spend her evenings driving a giant pink robot around. Out of a feeling of social responsibility, Susie will one day develop an AI for Susie-Bot. It won't be much, but it will allow the robot to learn, and the core systems will allow him to fight crime and help people for several years.

Eventually, though, Susie-Bot will become very lonely, and a bit disillusioned by his inability to make a dent in Paragon City's criminal underworld. After a brief goodbye to Susie, Susie-Bot will travel to Africa, where he will spend several years building houses and helping people, until he fades from notice. Without mechanical service, it is unlikely that the robot would last forever.

Perhaps ten or fifteen years later, a Peace Corps group will arrive in a village, where several well-constructed houses still stand. In the center of the village will be a fountain, constructed out of scrap metal, and at its center will be the remains of a giant pink robot, rusting, his green eyes gone dim many years past.