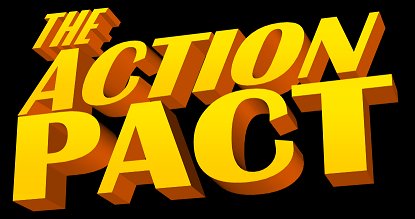 The ACTION PACT is the oath that the Original Six shared at midnight atop the Empire State Building in 1938, after the attack by the forces of the Malefactor upon New York City.

In 1936, the mysterious vigilante called the Dark Shrike -- after months of relentless detective work -- uncovered a secret threat to the United States and to the world.

Since he wore a mask and operated in the shadows, the Shrike did not have the credibility to approach conventional law enforcement or military authorities. His only recourse was to approach the "heroes" that he had theretofore distrusted. He contacted the best-known costumed crimefighters of the day, and assembled them in New York City for the battle no-one had believed would actually happen, against the multinational army of the mercenary mastermind called the Malefactor! 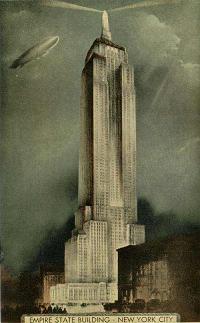 The Empire State Building, circa 1938
Therefore, in 1938, Shrike was one of the Original Six superpowered vigilantes who, upon a steamy August midnight, atop the Empire State building, made the promise that has come to be called the ACTION PACT:

Where evil rises, so shall we rise! We will not be silent, we will not rest, we will not wait: we will take ACTION! This we vow, we here assembled, together and for ever.

These heroes dedicated themselves to the Neverending Battle for Truth, Justice and Democracy. They held highest the virtues of Strength, Knowledge, Compassion, and Action, working to serve the public trust, protect the innocent, and uphold the law. They were sworn to preserve life, and improve it for as many beings as possible.

Over time, the Six grew into a major, organized alliance of crimefighters. These brave men and women came to be known by the same name as the covenant to which they bound themselves: the Action Pact. At first, calling the group by that name was an accident -- a mistake made by some citizens, fans and people writing for newspapers who misunderstood. --But the moniker stuck, and later, the team officially adopted the name.

In 1965, using his incredible powers over gravity and space, the hero called Star-Shard dragged a small C-type asteroid -- about 10 football fields long -- from its quiet interplanetary orbit in The Kuiper Belt into geosychronous orbit over North America. He then carved its interior into a vast architectural cavern complex, sealed it, built in life support systems, defenses, sensors, and all manner of remarkable machinery. Filled with atmosphere and surrounded with powerful force fields, it was transformed into a mighty stone-and-steel fortress in the sky. This was the SkySlab. 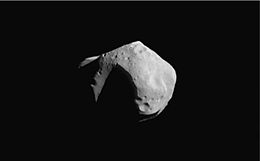 The asteroid, as Star-Shard found it
This amazing marvel served as the headquarters for the Pact from that time forward, until the fateful day in 2001 when Arachnos finally managed to hack the security computers by means of treachery. Thereupon they launched an assault that resulted in the deaths, and presumed deaths, of several members of Action Pact. Arachnos was finally defeated after a dramatic battle in high Earth orbit -- but the consequences were dire.

After that terrible day, the surviving members of the team continued their efforts in the Neverending Battle, but as the powerful base defenses would now attack any entity who approached, The SkySlab was not usable. It whirled around the earth, a dark sullen bauble, a literal tomb for fallen heroes, whose bodies were unreachable.

Only recently, founding member World Champion -- working with the newest young hero to inherit the name and powers of the Star-Shard artifact -- was able to subdue the defenses guarding the port entrance to Ventral Auxiliary Command Module 2, and as a result gain access to a small fraction of the powerful SkySlab's resources. This triumph represents a new era in the history of the ACTION PACT.

Efforts are ongoing to rebuild the team, discover the traitor who sold the Pact out to Arachnos all these years ago, regain command of the SkySlab, bury the few whose bodies remain frozen in the vacuum of the empty, vented sections of the base, and make it back into the symbol of hope and vigilance it once was.

One priority remains the reactivation of PRIMARY ONE, the subpersonality of the base's AI that became sentient in 1969, built a robotic body and joined the team on many adventures. Primary, also called P1, has not been heard from since the Attack of Arachnos in 2001. It is believed that with her help, the Defense Operations Mainframe could be cleared of the Xenophobe Virii that delude the base computer into believing all other entities are invading enemies...

Today, these heroes have become legends - and today the ACTION PACT fights on, defending all against the forces of tyranny!

((We are a classic gold- silver- and bronze-age-themed Roleplaying supergroup, modeled after classic hero groups like the JLA, Justice Society, the Fantastic Four and the Avengers!

All are welcome, as long as your toon fits the classic theme -- for example, no Assault Rifles please! -- and as long as you can play in Supergroup Mode till level 34, and always conduct yourself in a manner befitting a hero.

For more information, seek us out at actionpact.guildportal.com .))
Retrieved from "https://virtueverse.net/wiki/The_Action_Pact"
Category: The Action Pact