"The Etoile Islands, more commonly referred to as the Rogue Isles, have a rich, illustrious history, dating back far before the current reign of the tyrant, Lord Recluse. Arachnos would have you believe that history began and will eventually end with them. Yet the story of the Etoile Islands begins way before Recluse, or even President Marchand. Indeed, the true story of the Isles begins hundreds of years ago, all the way back to the late 1600's. These islands were founded by a group seeking freedom from prosecution, freedom from slavery, and freedom from oppression. And though they were followed, and imprisoned, and enslaved, they revolted! They fought! And they won. By 1756, thousands of settlers fleeing both Europe and the Americas came to the island to avoid the French and Indian War. A decade later, the people of the Rogue Isles rebelled and claimed independence. In a move that stunned the French authorities, the people signed a treaty of protection with England and effectively ended France’s claim over the Etoile Islands.

And so the Isles became a haven. A haven for those who did not agree with societies rules. A haven for those that believed ones worth was not measured in money, or in power, or in a pretend game of politics. Their worth was measured by their own drive. Their power was measured by their own ambition. They were not told what they could do, they simply did what they wanted, and my heaven, or hell, help any who stood in their way. This is the true legacy of the Rogue Isles! And with your help, this shall also be its destiny!

Do not be a sheep! Do not join the flock of the blind! People of the Rogue Isles, open your eyes and see that which oppresses you! Look down the path that has been set before you and see where it shall ultimately take us! Recluse government would have you believe that this is freedom. He tells you that anything is possible, anything is obtainable under his regime. As long as you do not interfere with Arachnos operations, or attack his "Arbiters", everything else is fair game. He tells you this so that you will not see the truth. He tells you this so that you do not see that The Rogue Isles is not the haven of freedom he claims it is, but a testing ground for his army of oppresion. Recluse would have us kill each other, so that the strongest may survive, and be a part of his "glorious" army. Recluse is preparing for a war with Longbow. A war with the United States. It is a war that he will eventually lose, and the Isles will be left a burnt husk of what it used to be. And that will be his legacy for the Rogue Isles. And so, we say if Lord Recluse wants a war, we give him a war! Brothers and sisters, let your voice be heard with your fist! We are flame that will cleanse these islands of Arachnos, and we are the winds that will carry its charred remains into the oblivion! You ask for freedom? You ask for deliverance? We ARE deliverance.

We are The Deliverance Construct. And we are the end of Arachnos."

The Deliverance Construct is a group of revolutionary patriots,

Black Graffiti
bent on removing the influence of Lord Recluse from the Rogue Isles, and returning them to the state of independence that exsisted in the time before Arachnos took control. The group itself was formed from the remains of several other groups, a majority of which were the Loyalist factions of President Marchand during the hostile takeover by Arachnos in 1963. Some of the founding members date back even further, to the time when President Oakes was still in office, and thus a majority of their principles come from Oakes own policy of government. When Statesman and the Freedom Phalanx appeared in Paragon City, many of the villains there decided to relocate. The Rogue Isles was an obvious choice. Many already had connections there and the little nation’s “friendly” attitude made it a perfect choice. President Oakes knew that if he resisted these newcomers, a majority of which were meta-humans, things would not turn out in his favor. But at the same time, he had bargaining chips, such as citizenship, diplomatic immunity, and other protections from American justice. And he had friends in the high places of America who were happy with the Rogue Isles just as they were. Deals were struck – in exchange for “playing nice” and taxes, the United States government turned a blind eye – and the Rogue Isles became a haven for the super-powered gangs and evil organizations of the world. And thus a state of true freedom was acheived, albeit for a short while.

Once President Marchand took office, change was in the air. Arachnos had settled in on the Islands, disguised as "just another villain group seeking amnesty from American justice", and they kept a low profile for a few decades while World War II took place. While most of the attention was turned towards the 5th Column, Arachnos secretly secured a strong powerbase within the Isles. It wasn’t until the mid-1950’s that it became publicly known that Lord Recluse , Statesmans arch-nemesis, was calling the shots for Arachnos. Shortly after, he performed a military coup, declared the Rogue Isles under the dominion of Arachnos and began to shape his empire.

In the midst of the chaos of Recluses military coup, surviving Loyalist sects, as well as other sects opposed to Arachnos began to coalesce to form the beginnings of what would eventually become The Deliverance Constuct. Up until just recently, The Construct has been little more than a thorn in the side of Arachnos, but things have started to change. The Construct has recently increased its number of terrorist activities against Arachnos (such as bombing the PTS), and has even been seen openly attacking members of Arachnos on the streets, a move that 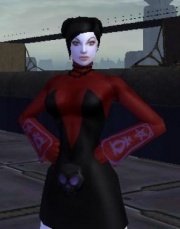 Moralee Grey
until recently would have been unheard of by this secretive group. The Construct has also become more active and open with its recruitment procedures, even going so far as to advertise in public. Most attribute this to the newly aquired backing of The Construct by Connor Knight of Aggressive Solutions International (ASI), whos wife Tanya Knight, better known as Death Graffiti, has recently taken power within the group. Even more good finacnial fortune can be attributed to the addition of Moralee Grey, the estranged daughter of one Lady Grey of Vanguard, and her collected family wealth into the group, although her exact role in the group and motivation for publicly supporting it is thus far a mystery. Most expert agree, all of this points to big things coming out of The Deliverance Construct, although noone is sure exactly what they will be.

The Deliverance Construct is a new VG in the Rogue Isles, and is looking to recruit new members to is cause. A RP group in concept, we are currently accepting applications from RP'ers and non-RP'ers, as all are welcome. We do regular events (SF's, PvP), and plan to start active, ongoing RP storylines as soon as we get enough active RPers in the group. Most storylines will be centered around Arachnos and Rogue Islands history, with emphasis on character development as much as possible. Characters with a mercenary/extremeist/militant theme are greatly encouraged to join, as well as those with a magical/mystical or technological origins, as a majority of our concept and future storylines will center around these ideas. If you are intrested in joining, or would like to hear more, or if you are a similarly themed RP VG and would like to form a coalition with us, feel free to send a tell to @Arcane Tek (Death Graffiti) or @Boom Maker (Moralee Grey), and we will be happy to help you with an invite or more information.

The Base of Operations

We currently have a fully functional base, with full salvage and storage capabilites, as well as the first four teleport beacons (Mercy Island, Port Oakes, Cap Au Diable, and Sharkhead). We are working towards upgrading the base plot as we speak, and will eventually do raids on a regular basis. The theme of the base is a mix between magic and technology, set in a underground, hidden location.

The Deliverance Construct meeting table, where most of the decisions of the Inner and Outer Circles are made.

Another look at the meeting room

Another look at the Meeting Chamber.

The Medical Bay, which uses a mix of arcane healing items and the latest technology to keep the Deliverance Constuct healthy.

The storage room, where countless items of mystery are stored to further The Deliverance Constructs cause.

The teleportation chamber, giving members access to key strategic point all across the Isles.