\ \ ABOUT / /
The Hazards are a gang of up-and-coming misfit villains who met while working gigs together through Blackbook, an underground app that allows people to anonymously hire criminals for less-than-savory jobs around the world. They've developed a sort of professional camaraderie, and they use that to push their careers to new heights.

The Hazards operate out of a network of abandoned, collapsed tunnels underneath the Golden Giza in St. Martial that once housed shops and a subway station. Frightling was squatting there for months before he invited the Hazards into it, and they helped renovate it into shared living space and headquarters that keeps them all relatively off the grid. 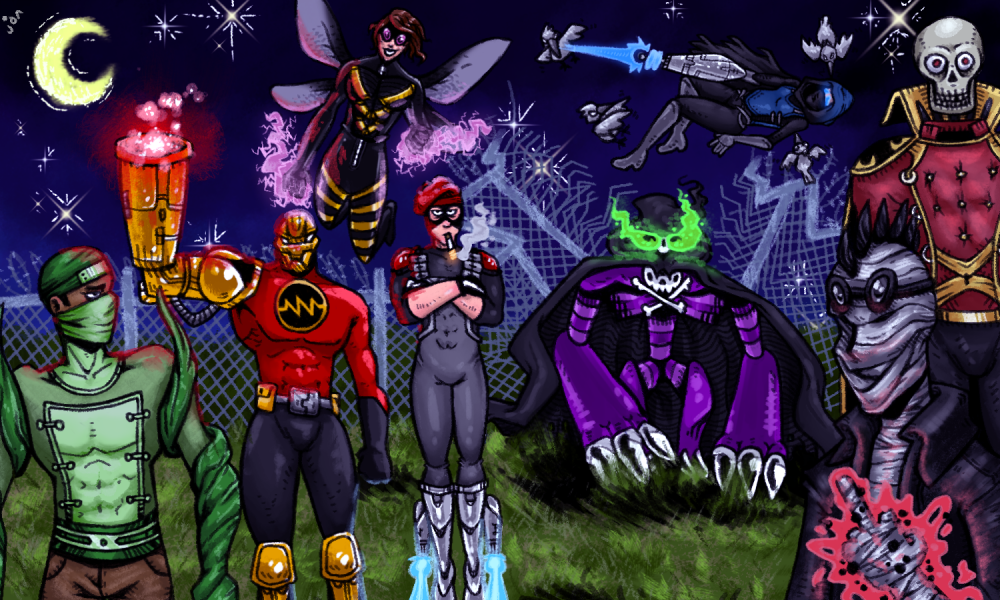 Frightling, Beeline, Au Revoir, Crimson Cannon, Degenerate, Gloomsday, and Razorleaf work several jobs together through Blackbook, a dark web app that allows people to anonymously hire criminals for unsavory jobs. As they do so, they build a sort of professional rapport with one another. A newspaper notices this crew working together with regularity, warning the public about the potential hazards this new gang might pose to society.

Eventually, a Blackbook job pits the group against a local chapter of Goldbrickers. A series of confrontations between the two groups ends with a number of Goldbricker operations suffering irreparable damage. After a confrontation with the chapter’s leader, Degenerate officializes the Blackbook gang’s new name, inspired by the newspaper articles written about them, by tagging it on the remains of the Goldbrickers’ base: The Hazards.

The gang sets up headquarters in a set of collapsed tunnels connected to an abandoned subway network underneath the Golden Giza that Frightling had been squatting in alone. Word of the Hazards’ rise spread like wildfire, bringing new jobs to their doorstep everyday. The most notable was brought to them by a mercenary who was looking to bust Guerilla, a major league enemy of the Vanquishers, out of prison by swapping him out with a regular, unintelligent gorilla unnoticed. In the chaos of the prison break, the unsettling Cursemaker also escapes custody, and ends up joining the Hazards himself.