This location is on the EU Defiant server only, but placed here as a RP reference for my American friends. 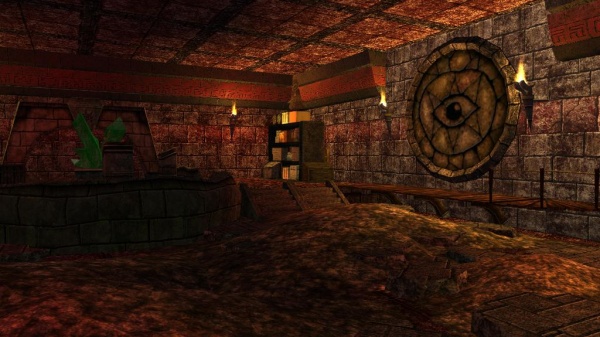 While its exact location remains a mystery the Shadow Eye Temple has been claimed as the current headquarters of the villainous group Hell's Harem, as well as being the residence of the group's leader Devil's Harlot.

Very little is known of the origin of the temple, but what we can be sure of is that the temple has been the site of untold numbers of sacrifices. The walls and floors and permanently stained with blood, including animal, alien, daemonic and even human bloods blended into the very fabric of the stone.

At some point the temple was torn asunder, buried beneath the earth as punishment for some crime. Whether this was the work of an early hero trying to stop the slaughter of innocents, retribution from a daemonic power or an act of whatever deities may have taken notice of the temple is just one more of the temple's mysteries. 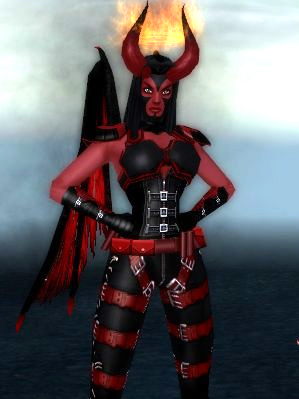 Devil's Harlot, the explorer who uncovered the ancient temple

Early in her career in the Rogue Isles Devil's Harlot uncovered a strangely marked piece of stone which appeared to have once been a piece of masonry. Thinking nothing of it Harlot began to carry the stone as a good luck charm, the solid lump of rock placed over her heart to add a little more protection against attack.

On her first visit to Port Oakes Devil's Harlot came into contact with the Base Portal located in the area. While standing close to the portal the assassin noticed the stone under her breastplate beginning to grow warmer, and when she removed it from its usual hiding place she noticed that the runes carved into its surface had begun to glow. Working on a hunch the villainess threw the stone into the portal.

The effect was immediate, with the base portal suddenly changing from it's usual blue glow to a scarlet tone. Stepping into the beam to retrieve the stone Devil's Harlot found herself transported to an ancient temple.

At first believing there to be only the single chamber to the hidden temple Devil's Harlot began to use the newly unlocked location as a warehouse and safe sleeping spot while going about her daily activities in the Isle. Many of her enemies tried to unlock the secret of her lair, believing it to be simply an abandoned warehouse or office block as so many other villains had been known to make use of.

While trying to clear room to stow her ill-gotten gains, stolen supplies and other miscellany Harlot discovered a set of archways set into the walls of the chamber, the entrance hallways beyond stopped up with soil and debris. At the time she lacked the resources required to excavate the tunnels however, nor the inclination to perform the manual labour herself.

After becoming possessed by a daemon Devil's Harlot gained a fresh drive to expand her interests in the Isles and found herself in need of a larger base of operations. Hiring muscle from the vagrant inhabitants of Port Oakes she transported the wretches to the temple and had them dig out the tunnels, revealing a larger chamber beyond the entrance hall.

One wall of this new chamber was dominated by a single large display depicting an unblinking eye. Recognising this as a symbol of arcane magicks but not fully understanding its significance Devil's Harlot knew that if work of this find should leak out to the mystics scattered over the Isles many would come to seize her home for their own nefarious purposes. Sealing the entrance to prevent any of the workers escaping the daemon within drove the assassin to systematically slaughtered every last one of them.

As the blood soaked into the stonework of the temple Devil's Harlot saw mystic runes set into the floor begin to glow, their pwoer renewed with the blood sacrifice they had received. In moments the power of the runes began to affect her, forcing the daemon from her mind, leaving it nothing more than a quiet voice whispering in her subconscious. Realising what she had done, as well as the danger such actions could put her in should Arachnos ever decide to investigate the disappearance of so many vagrants, many of whom could possibly be acting as spies for the organisation, Devil's Harlot quickly began to relocate the majority of her resources into the hidden base.

Having little knowledge of magic and mysticism Devil's Harlot instead chose to use the temple as a base of operations rather than a mystic nexus. Outfitting the hidden chambers with a mixture of stolen, purchased and hand-built equipment she began to make use of them to further her own ends. Before long contaminating the once sacred chambers with the curse of modern technology.

Harlot wasn't above making use of the magics she could understand however, keeping the magically portal and the protective wards in place to secure the location from farseeing eyes and unauthorised access. Along with this she discovered an ancient resurrection device which, when given a sample of an individual's blood, could instantly transport them back to the base whenever they became mortally wounded. Not fully trusting the supernatural nature of the devices however Devil's Harlot added modern touches to further aid both the security and medical recovery of the groups members.

Although the size of the initial base has been greatly expanded the arches which adorn the walls of the main chamber speak of further discoveries still hiding buried beyond. However at this time Devil's Harlot is more concerned with protecting the secret of her lair, along with expanding her interests out in the Isles, and has yet deemed the uncovering of the lurking secrets too enigmatic to risk resources on.

Although the gateway to the hidden temple is a marvel of magical arts the chamber in which it resides has little of note beyond the doorway itself. The chamber lies littered with incoming supply cases deposited in whatever free space is available until such a time as the goods nestled within are moved to the main chamber's storage facilities, are shipped back out to the Black Market or are simply used as and when needed. 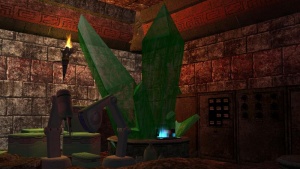 With its wall decorated by the symbol of the Eye, which as yet has not been identified by the Hell's Harem, the main chamber is little more than an open space to allow worshipers to listen to their high priest's sermons.

A home built generator station providing the power required for the base's modern equipment has been installed in the main chamber, along with a simple laptop computer system to manage the distribution of that power.

Since Devil's Harlot uncovered the chamber a storage rack has been set up to make better use of the space. Equipment worthy of salvage is stored here for use by all group members.

One of the many marvels left behind by the temple's previous occupants is the Crystal of Formation. By channeling the correct components into the crystal's structure inventions can be created without the need for modern equipment and labour. In practice this works much in the way of any other Worktable, but with more style.

Branching off of the entrance chamber a small room also prominently decorated with the Eye, as well as having a lectern which may have been used for some religious observance.

The first thing most people spot in this room though is the large stone head, the mouth of which seems to be blessed with the power of resurrection. Many group members facing the jaws of death instead find themselves standing in the mouth of this great beast. 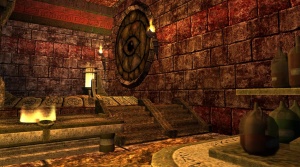 While the original purpose of the small annex connected to the central chamber remains a mystery the presence of both the ever present symbol of the Eye as well as the facilities for construction and worship have led some to believe that the original tenants of the site used it to show their devotion by toiling in the name of the Eye. Whatever the reason the facilities have now been turned to the purposes of Hell's Harem.

As a wanderer enters the annex they immediately feel the warmth of the Forge, set as it is in the floor just to the right of the entrance archway. The Forge lacks any form of fueling or bellows to keep the flame alive and yet it continues to burn. Some have suggested extinguishing the flames to see if they will spring back to live, but as they have proven themselves useful in the production of equipment for the temple, along with aiding in repairing the ancient edifice, the decision has been made to let the fires burn.

While the heat of the Forge is the first thing felt by a newcomer it's the sight of the Unholy Altar which immediately draws their attention. Set directly beneath a symbol of the Eye, in the centre of one of the many rings of power scattered throughout the temple, the Altar has been known to bestow miraculous gifts to those who provide worthy offerings to the powerful mystic fires. The screams of those foolish enough to offer unworthy gifts can often be heard echoing around the temple's halls, although not for long.

Located against the farthest wall of the Annex the Archive at first was believed to be simply a desk or sacrificial table of some kind and was left ignored and unattended for many months after its discovery. When one of the labour force happened to fall over the table while being slaughtered in Devil's Harlot's purge she noticed that his body, unlike the others around the temple, did not bleed. After much experimentation it was discovered that a strange aura around the table allowed anything places on its surface to be held in stasis until such time it was removed. The Archive is now used to store prized relics for the use of the groups members, who are encouraged to share any inventions they discover with those whom can make the best use of them.