Torrefy was originally created by Kedeawyth on the test server as a Fire/Ice Tank. After some tweaking, she was recreated on Virtue in her current incarnation to get back into RP. She started as just a punk girl cliché, a sort of partner to Shellac's crazy antics, but was then tweaked again with a different backstory. Inspirations came from Motoko Kusanagi and the cyberbrains of GitS, but that's about it. We'll see what comes out of the woodwork.

Tori's history is quite black and white. You'll hear the white part, and won't even know there was black.

What She Will Tell You

She grew up constantly traveling. Her father, a wealthy industrialist and founder of the Lyndale Foundation, almost always took young Tori with him as he traveled for business. Every new place she went taught her more about the world around her than any school or book could. It wasn't until she was twelve, when her father went to the Rogue Isles to finalize a business deal, that Tori saw first hand the depravity and degradation that humanity was going through; and she was facinated by it. Straight A's in school, track and gymnastics star, Tori had a gold career ahead of her. But her parents' hopes were dashed when she graduated. On her eighteen birthday, it was off to the military.
A natural leader[1], she always had top marks in all areas of her training. Sniper training, electronic warfare, interogation... two years and over fifty successful missions saw her induction into Special Forces and BlackOps. She'll tell you most of her records are locked away, never to be seen; deniability on the part of the US government. A successful seven year career in Special Forces/BlackOps, multiple comendations and awards. She eventually left; her reason? She usually mumbles something about government redtape bullshit. Going back to the Rogue Isles, she sells her skill set to the highest bidder.

Tori, or Major Lyndale, was part of a number of prominent military operations during her Special Forces career. Operations Blackout, Umbrella, and Red Dawn to name a few. She was key in a number of raids on Rikti outposts during both Rikti wars, including the assassination of certain members of their Restructurist party. She was also a member of the squad that raided Malta's factory, destroying the Dreadnought Red Kronos 01 Titan and ending Project: World Wide Red.

** Spoiler warning: Details about a player-created storyline, or information currently unrevealed about a character, follow. **

What She Won't Tell You (AKA Project: Wildfire)

She never actually left BlackOps. Nor was she your average Special Forces soldier. Three years prior to her "leaving" BlackOps she was inducted into a top secret military experiment. Joining during Phase3, her body was augmented with a number of stronger, more resilliant cybernetic versions of major organs (heart, liver, lungs, etc...). They also enhanced her brain, creating what the military called a "cyberbrain." Using cutting edge technology, her brain was installed into a metal case, equiped with multiple functions, including (but not restricted to) global net access, memory storage, and wireless communication.
This augmentation was to allow her body to survive the process she was getting prepped for. The experiment, codenamed Project: Wildfire, utilized an alien entity recovered from a crash site in Maine. The cells generated by the entity, called Black Cells, cause rapid mutation when introduced into the human body. Spontaneous mutant power generation and super-soldier augmentation was the goal of Wildfire. Of the 300 original participants, only 3% (9) were successful, 50% died, and the other 47% were horribly mutated beyond recognition or repair.
Five of the three hundred were augmented in similar ways to Tori; all of them, including Tori, survived. Because the augmentation was statistically critical in the recipients' survival, but expensive beyond reason, the project was canceled.

Black Cells, so named for their ebony colour, are in actuality the "stem cells" of the alien entity used in Project: Wildfire. Unlike humans, in which cells split from cells of the same type, Black Cells are the only way for the alien to create new cells (its cells can't replicate).[2] When introduced into a human body, Black Cells try to merge with existing cells, then mutate into a whole new type of cell, called Human/Black Cells (HB Cells or HBCs). Under extremely controlled environments, the mutation can be aimed in the right direction. It wasn't until Phase3 of the project that mutation was starting to be controlled, instead of hoping for results. In certain recipients, the merged/mutated cells gave the possessor powers, though said powers were all across the board. Most weren't so lucky, either dying from the mutation or their whole body mutating uncontrollably. Although the alien had no "powers" to speak of, the mixture of human cells and Black Cells creates a perfect slate for "good" mutation. From the nine successful participants, seven strains of HBCs were collected. Although research of Black Cells still continues, because P:Wildfire was closed, human subjects are no longer used (to the general public's knowledge).

There are seven known types of HB Cells. They can be found throughout the human body, but most prominently in the hands, chest, and feet. Minor mutations witin the HBCs themselves have been known to slightly alter their power output.

This is her current path. Enhancement slotting coming soon. 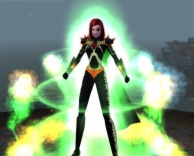 Fire/Traps Corruptor: Having learned to congeal her fire into spheres, she has gained some much needed ranged stopping power. Adding to it, her equipment gives a variety of alternate tactical routes.
Kat/WP Stalker: Utilizing her Special Forces/BlackOps training Tori can sneak up on opponents virtually undetected, killing them with a single blow. With the help of Dark Dentist, Tori combined her Pyrcytes with Ψ Cells taken from a co-participant in P:Wildfire. They created Ψyrcytes, producing a mixture of fire and telekinetic abilities.