Widow January is a fictional character in the City of Heroes game on the Virtue Server. The character was inspired by the Marvel Superhero, Spider-Woman

Jessica exhibits a child-like exuberance in most activities. She often gives the impression of an adult with "Peter Pan Syndrome". She absolutely refuses to act her age (30) and is given to fits of immature humor and social indiscretion. She also fiercely dedicated to fighting against Arachnos and other "Forces of Evil". Jessica sees "Good" and "Evil" in fairly simple, black and white terms, despite her own checkered past.

Jessica's genetic mutation was discovered as a child and artificially activated by scientific experimentation.

Jessica subconciously generates psychic impulses that are delivered directly to the pleasure centers of the brains of people around her. This tends to put people at ease around her and find her a likable person.

Daniel O'Rourke was a scientist working for Crey. Nothing is known about the projects he worked on and Crey denies any knowledge of his current whereabouts. Jessica's genetic mutation was discovered when she was two years old and was subjected to unknown experiments designed to artificially kick-start her mutation.

By age 10, Jessica was already displaying paranormal abilities. She was suddenly kidnapped by Arachnos Operatives and taken to the Rogue Islands. There she was brainwashed and indoctrinated into the organization. She served Arachnos for almost 20 years before attaining the rank of Night Widow. 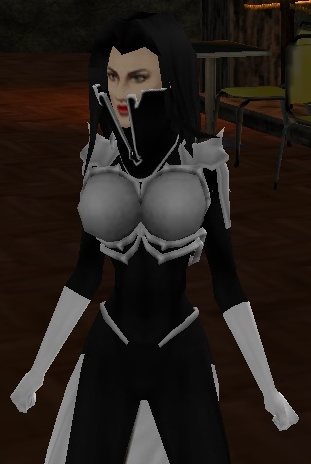 Her first assignment was to kidnap another young mutant girl and eliminate her family. Jessica was outraged at this wanton act of violence against innocent people and took the first steps to breaking her Arachnos conditioning. After a two day rampage against Arachnos Operatives, Jessica was captured by Paragon Police and allowed herself to be taken into custody.

With the help of Sister Psyche, Jessica was able to break her conditioning and reclaim her true identity, but at a high cost. She mentally and emotionally regressed to the child she was before being kidnapped. It took extensive effort on Sister Psyche's part to bring her back up to an adult level but she continues to display many child-like and even childish qualities.

She now operates as Super Hero in Paragon City. The pattern of her costume was inspired by the Xcaret Widow, a colorful relative of the Black Widow. Jessica recently had memories resurface of her father doing research on this rare spider.

After recently playing "Marvel Ultimate Alliance" on the Xbox, I was reminded of what a cool character Spider-Woman had always been. Widow January is my homage to Spider-Woman.

The Xcaret Widow is my take on the "Wundagore Widow" which played a major role in Spider-Woman's origin. Xcaret is a tourist attraction near Cancun, Mexico.

The first Incarnation of this character was called "Widow Goes Zap". Going Rogue present a much better opportunity for Role Playing this character so I'm scrapped the original. Widow January is currently a SoA Widow and will become a Hero when Going Rogue is released.