As a hero, she gets her job done but without the usual honour and flair that many other heroes would use. Preferring the more direct method due to a lack of superpowers, her techniques are often underhanded and her fighting style is dirty and ruthless. This has probably led to her attitude of people with super abilities, and her obvious lack of respect for them.

Always coming off as rude, or mean spirited, it's very rare to catch her in a good mood. This is not to say she is dark and brooding, she just never seems to be all that happy or excited. She does display more open kindness to kids and young teens than she does adults. Her father-in-law, William, would say that it's because of her "headaches" a term he uses when referring to her psychic awareness. It takes Alison a lot of effort to shut out her powers, she finds it rude to listen in on peoples' thoughts.

Growing up in another country gave her a different view on many of life's vices. Her openness towards sexuality has a tendency to unnerve some people. Alison also drinks and smokes, and with all the technology to keep us alive that the Rikti left behind if you mention how it's bad for her you're bound to piss her off more.

The WIVERN T.A.U. (Transmogrifying Armour Unit) is a psychic interface developed by privately funded British scientists William and Margret McLourgh. The designs are based off of recovered Rikti technology, and the abilities of the armour are seen in common use today. In the wake of todays technology, and due to the restrictions in user ability, the WIVERN T.A.U. is the pinnacle of mediocrity.

Combining the ability to create self-sustained portals, and repair damage at a cellular level, the intent of the armour was for use by modern day soldiers and police. The flaw in the system was that it was impossible to reliably use the portal system without a computer "brain" to determine location vectors. However, someone with a high level of psychic cognitive function would be able to use the interface without a problem.

Having been passed over by many military organizations, only two versions of the T.A.U. have ever been made. The first version, a prototype, was a bulky armour used by The Wivern. The prototype was mostly destroyed in the accident that killed The Wivern. The Type 2 model is much less an armour than it is a harness. Though some plating is necessary in order to protect the users vital weak points such as the chest and head.

Although nearly dull in appearance, Wivern uses an ultrasonic generator attached to the blades in order to cut through denser materials. The blades are superheated through the friction caused by the vibrations allowing for an increased cutting power. This allows the blades to go from non-lethal to lethal in a matter of seconds.

Using a mix-matched fighting style, Wivern has made herself almost unpredictable. But if one were to assume her style was crude, they would be proven wrong. An informal learner of many of the principles of Jeet Kune Do, Wivern takes well to "be like water". Watching Wivern in a fight is similar, in many ways, to watching a dance. She easily flows through combat, keeping herself moving in order to confuse her opponents. This doesn't mean she fights with the same formalities of a learned martial artist, she is not against using underhanded moves in order to gain an advantage.

The self-made style holds no true name, but it is composed of moves from European fencing, Kali, and Savate. Wivern is a master fencer, having been training for years, and uses it as the basis for her style. The style is beautiful, practical, and lethal.

Her only notable power is a high level of psychic function. A power granted through mutation. This allows her to read minds, see the probable future, and even use limited telekinesis. She is not able to project her psychic power into an attack without the use of a proper amplifying device, however.

Using her psychic awareness to power her armour, the ability is limited in combat. Being able to lift herself slightly in order to jump higher and a higher reaction time are the extent of the power. Out of her armour she has free range to use her abilities but merely chooses not to do so, even though this causes headaches which vary in intensity depending on how many open minds surround her. These headaches also cause lapses in her sanity. 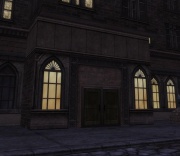 The foster home Alison grew up in.

It was a cold night when an infant was left at the door of a foster home in Orléans. With only a note mentioning her name and date of birth, she was a forgotten child. She was Alison Evilyn Renpart, born November 12th 1984.

Growing up in the foster home, young Alison was out casted by the other children. She was different, she was strange. Often seeing things before they would happen she was labeled a cheater. It was this ability that made her special, that made her stand out.

It was no surprise to Alison when the man came looking for unique children, children like her. She had seen it after all, in her dreams the night before. The man tested her gift using only a deck of cards, an easy test for even the weakest psychic. The man left with promises of taking Alison to her new home and to her new family.

Alison, at only age ten, would join many other girls in a program intended to push their psychic talents to the limit. They were indoctrinated into a belief of survival of the fittest. Many would fail, left broken and useless by the cruel teachers and faceless entity they all served. Alison would not be broken, however. She would succeed. Though her psychic power was weaker than the other girls, she was physically stronger and with a stubborn attitude to match.

When the few remaining girls where graduated into Fortunatas, it was Alison who showed the most promise and willingness to serve. Her loyalty to Arachnos seared into her very being. She would rise quickly, her determination taking her every step. 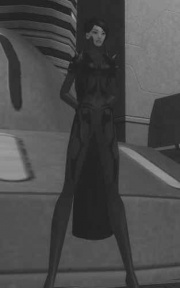 As a Fortunata, Alison would lead many missions for the glory of Arachnos and Lord Recluse. Her missions were often subtle in nature, allowing her to live a double life. It was on one such mission that Alison would encounter a flaw in herself she had not noticed before. That she could love.

The mission was to steal a magical relic called the Talisman of Ruin from the Museum of London. In her reconnaissance, Alison met a man named Charles, whose charm and mysteriousness would lead her into a relationship. This relationship would slowly turn into an engagement. Fate, however, would have other plans.

Tragedy struck the night of the museum heist. Alison led a team of inexperienced Wolf Spiders to steal the relic. In the break in, a silent alarm had been triggered and the nearest hero was one called Wivern. The fight would be a complete stalemate until a stray shot struck the relic. The explosion of released magical energy vaporized everyone except Wivern and Alison.

Battered and beaten, Alison surveyed the destruction. The object was destroyed as well as her team, and the hero had been defeated. Against her better judgment, Alison unmasked the hero. Wivern was Charles McLourgh.

When William McLourgh found a scorched Alison on the porch to his home carrying his dead son, he was moved. He loved Alison like he would his own daughter if he had one, and William knew she would have never intended to hurt his son in anyway. Taking her in, he would care for Alison and protect her from what she had done.

It was not long after the funeral of Charles that Alison would take up the mantle of Wivern. Though William would beg her not to, she insisted. This was her chance to change, her chance for repentance.

In an age where advanced technology and super powered individuals can be found everywhere, being a relatively normal human is an extreme disadvantage. Alison has trained her body to be able to deal with the punishment she often takes as a hero, but she is still "softer" than many of the people she works with.

Relying on her natural intelligence and her own physical strength and martial skill, she can do what many other heroes do everyday. She uses her armour as a barrier, to save her from things she cannot avoid. If she was shot while not wearing her armour, she'd most likely die.