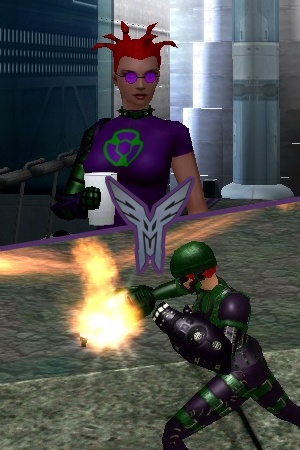 Amy's parents moved to Paragon with Maria five months pregnant because they wanted their daughter to grow up in, as Andy put it, "the center of the world." The Rikti Wars hadn't happened yet, but the city was still teeming with superheroes and the daily threats they thwarted; to keep their child safe from the majority of the petty crime overflowing in the streets, Andy and Maria bought a hilltop house in the peaceful suburbs of Astoria. With Andy's degree in molecular biology it was easy for him to find a job in the not-yet-saturated high-tech market in the city, and their lives settled into as close a semblance of normalcy as it could in a place where men in tights flew by the bay windows on a semi-hourly basis. The excitement and anticipation of their baby girl grew with every passing moment.

She was born without incident, a bouncing, happy infant who already looked like she had been dipped in polka dots. Andy and Maria pampered her outrageously, and Maria, who had been adamant about returning to her nursing work once Amy was born, decided that her job could wait, especially with all they'd saved up beforehand and Andy's new job, and settled on staying home to take care of the new baby. Little Amy exceeded their hopes; she learned quickly, and took to reading, writing, and study even before she started preschool. As she grew, she took to intellectual pursuits more than she did her social life, and her lack of exercise was beginning to show. Her parents worried, and did their best to be supportive, but Amy seemed set on her path.

One day, Amy asked Andy to buy her something - a Creepy Crawlers oven, as she now professes never to be able to forget. Figuring it was just another thing that would end up packed away in a box somewhere, and as the girl had been doing a lot of that lately and he was getting fed up, darn it, he refused, and as she was wont to do she went to her mother, who also declined. Amy was shocked - her parents had never really denied her anything before, especially not something she really really wanted. So, in a fit of hormone-fueled rage, she packed a suitcase and ran away from home.

You know you want to mock the fat girl!

"Immature, oversensitive, and reckless -- reminds me of some of the spoiled brats I went to law school with. Yet she's also capable, resilient, adaptable, and I'm proud of her when she keeps on track. I'm just waiting for her to believe in herself as much as I do."