The Yeon Cabal is a magic origin faction. They would be (ostensibly) level 30-40, with some spill over into the low 40s. They would also be very rare and only come into conflict with players when hunting magic artifacts is concerned. They exist in sort of a grey area, not specifically villainous nor on the side of justice.

Dae Yeon formed her own cabal in 1984. She formed it out of frustration when her daughter seemed like she wasn't going to make anything of her life in Dae's footsteps. In the early days, she advertised her surface program as just being a home remedy and relaxation program in the vein of new age methods, specifically aimed at children. One set of rituals she would give would produce different results than listed if the person has any latent ability to be harnessed. She would then take in these children and would unlock their latent abilities through a special ritual. They will gain powers involving either fire, ice, electricity, earth, wind, or gravity. She then gives them a training program and an amplifier wand, allowing them to pretty much run free with magic powers.

Legacy Chain was one of the big critics of the program. They were mostly concerned with how all these children were basically given significant magical power without any guidance on how to properly use it for good. During those 12 years, one of Dae's recruits would get in significant trouble with either their school or the police due to their abuse of their power every month or two. Usually, Dae would then bail them out and get the school/police to erase the records, but it didn't completely escape Legacy Chain. It took them the better part of a decade before they were finally able to link the innocuous looking program to these children (much of the delay was the fact that Legacy Chain can't directly approach children without it reflecting poorly on them). They finally succeeded in getting Dae to cancel the program in 1996.

During the Rikti war, Dae started recruiting into her cabal again. This time, she instead went through orphanages, finding the ones with latent powers and "adopting" them. She would find families that either didn't have any children or only had one, then would mind control the parents into taking in one of her recruits. This was only done for legal purposes, though. Dae kept her status as "gyesida" (grandmother), acting as both the teacher and primary parent figure for all her recruits.

The Yeon Cabal's activities involve hunting artifacts, spells, and other magical objects. While they are similar to the Circle of Thorns in that regard, they are also extremely careful and have no other agenda in mind while hunting the artifacts. They rarely (if ever) use the artifacts they obtain, instead completely sealing them from detection and putting them in one of the hundreds of crates they keep stored in their base. They will never hunt anything they can not safely obtain and seal off. The Yeon Cabal is not a villain group in that they do not prey on innocent people, take hostages, or stage assaults just for the sake of inflicting casualties. They will, however, stage raids against villainous factions (they won't touch anything involving either the government or any widely accepted hero groups such as Legacy Chain) and are not afraid to kill if it is required. They've also been known to hunt down individual people to get information (although this is almost always done by Dae Yeon, as she can extract the information without requiring specific torture). Their activities are very discreet and almost never attract the attention of official law enforcement, although they've been dogged by Legacy Chain pretty often.

They operate out of Croatoa, although they are not involved in the war there in any fashion outside of self-defense when necessary. Their base of operations is an old commercial line of stores in a mostly abandoned corner of town. While it still appears as though they're separate buildings, they were haphazardly remodeled on the inside to accommodate study and storage quarters. The big part is the warehouse, which has hundreds of warded crates containing a huge variety of magical artifacts, a great many of which are extremely dangerous. It's the sort of place that would make Legacy Chain flip and the Circle of Thorns send every single available member in Paragon City to raid if they only knew it existed. It's heavily warded and there are a couple dozen safeguards on the crates to prevent the wrong people from opening them. Only Dae Yeon herself can open any crate that has been sealed off, which is a pretty rare occurrence in and of itself.

The hierarchy of the Cabal is very simple. Dae Yeon stands unquestioned with total authority over absolutely everything within her organization. Every major plan has to be run by her first, every major discovery has to be shared with her. Nobody else is allowed to so much as even show any authority around her. In Dae Yeon's absence, the Sookryeonja have authority. There will never be any operation run without at least two Sookryeonja overseeing the Sinbyeong and Joong. As a general rule, there will be one Sookryeonja per 10 Joong/5 Sinbyeong. Joong and Sinbyeong have no authority (not even over each other) and must follow the orders of their commander to the best of their understanding and ability. Major, intentional deviation from these rules only has one single punishment: expulsion. Most of the people that are out in the field against anything more threatening that the Hellions are completely loyal by that point and won't cause any problems.

I'm more than happy to let other people use the Yeon Cabal in their fiction and character concepts. Just private message me what you want to print that involves them before doing so.

Dae draws most of her recruits from the orphanages of Croatoa, Faultline, and Kings Row. More are recruited by the children she adopts at their schools. Children have to go through the ritual between the ages of 6-12 in order to unlock their latent powers. It usually takes a couple years before they can manifest any significant amount of power, so they have to use amplifier wands for their early training.

Sinbyeong have powers that align to one particular element, plus a dam kun for melee range.

Stone Fist Melee, Moderate Damage(Smash), Disorient
You have been disoriented by the stone impact.

Hurl Boulder Ranged, High Damage(Smash), Knockback, -Fly
You have been knocked down by the boulder.

Gale Ranged(Cone), Minor Damage(Smash), Knockback
You have been knocked down by the gale.

Crush Ranged Minor Damage(Smash), Immobilize
You are held in place by a gravitational field.

Lift Ranged Moderate Damage(Smash), Knockup
You have been swept off your feet by a gravitational force. 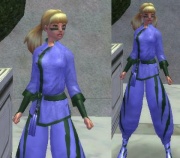 Within five or six years, most recruits will learn how to manifest their powers without amplification. During this period, they are taught the other basics of witchcraft such as powders, water reading, and telepathy. Most will also have at least some field experience in battle by this point.

Weakening Dust Ranged Area of Effect, -Res(All)
The weakening dust has lowered all your resistances.

Hot Feet PBAoE, Minor DoT(Fire), -Speed
The area around the enemy has been heated to a high temperature.

Tesla Cage Ranged, Minor Damage(Energy), Hold, -Endurance
You are being held by an electrical cage and your endurance has been drained.

Fault PBAoE, Knockback, Disorient
You have been disoriented by the shockwave.

Fossilize Ranged, Hold, -DEF
You are held in a stone prison.

Propel Ranged Moderate Damage(Smash), Knockback
You have been knocked back by the debris.

Dimension Shift Ranged Intangible
You have been made intangible by a dimension shift.

The pinnacle of Dae's program. These master witches no longer need their wands to exert their full potential (although many still keep them for sentimental reasons). They are battle hardened, highly skilled in their elemental ability, and highly attuned to magic. They serve as the leaders in the absence of Dae Yeon.

Amnesia Dust Ranged, Special
Not talcum powder. This dust has restricted access to some of your abilities for a temporary basis.

Thunderstorm Targetted Area of Effect, Extreme Damage(Energy), -Endurance, -Recovery
Your endurance has been drained and your recovery reduced.

Granite Armor Special
Turns them into living stone. It removes all their other powers, replacing them with the following:

Jab Melee, Minor Damage(Smash), Disorient
You have been disoriented by the blow.

Punch Melee, Minor Damage(Smash), Knockback
You have been knocked back by the blow.

Hand Clap PBAoE, Knockback, Disorient
You have been disoriented by the blow.

Foot Stomp PBAoE, Moderate Damage(Smash), Knockback
You have been knocked back by the blow.

Hurricane Toggle: PBAoE, -Range, -Accuracy, Repel
You are being repelled by the enemy's hurricane.

Crushing Field Targetted Area of Effect, High DoT(Smash), Hold
You are held by the gravitational field. 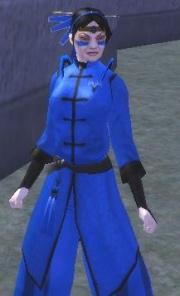 Dae Yeon is the leader of the Yeon Cabal and one of the leading experts in arcane studies. She has spent the past 60 years honing her skill in both her primary elemental skill of ice and her self-induced psychic abilities. She isn't someone to be taken lightly.

Ice and Psionic Resistance +Def(Ice, Psionic), +Res(Ice, Psionic)
Dae's constant training in ice and psychic control has made her highly resistant to the effects of both.

Chilling Embrace PBAoE -Recharge, -Speed
Dae constantly emits a wave of cold around herself while fighting, slowing her enemies.

Mass Confusion Area of Effect Confuse
Dae is confusing you with her psychic abilities.

"Mindrape" Melee Hold, -Accuracy, -Attack, -Def(All), -Res(All)
Dae has forcedly extracted a portion of your memories, causing mental anguish in the process. She will hold your tactics for a few minutes and use this knowledge against you, lowering your accuracy, attack, defense, and resistance against her.

Block of Ice Ranged Moderate DoT(Cold), Hold, -Recharge, -Speed
Dae has frozen you in a block of ice.