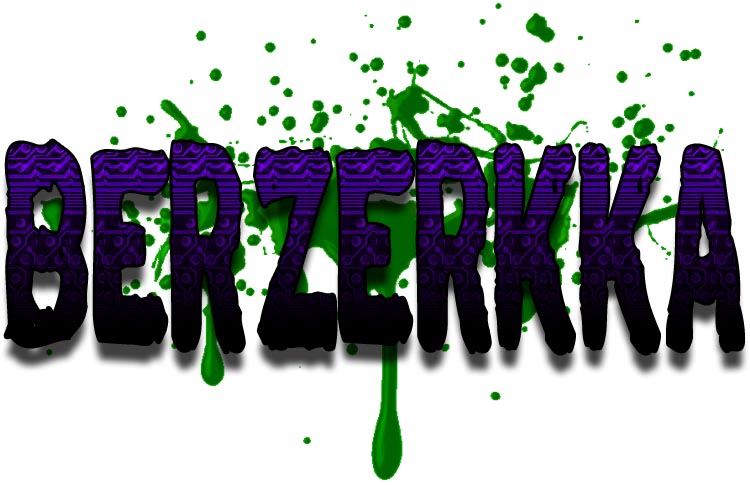 What began as an edge on the lower-tier heroes of Paragon City spiraled out of control for Berzerkka, giving her an insatiable hunger for power. From Superadine abuse to cybernetic augmentation to genetic engineering, Berzerkka has been spliced, jacked and pumped so much that she is no longer biologically classified as human.
Now a firm believer in the Will to Power, transhumanism and sheer undeniable force, Berzerkka will not stop until she is the single most powerful being on the planet.

"Strength does not come from physical capacity. It comes from an indomitable will."

Born to an uncaring mother and an unknown father in a faceless East Berlin slum, Ida Bauer was just one of countless street rats to fall through the cracks of society. Abandoned early in life, Ida had only her overwhelming will for survival to rely on, allowing the girl to do cruel, debased things to herself and others in order to live. By the time the Cold War ended Ida had grown into a brash young lady, self-reliant and surprisingly intelligent, forged to a lethal edge by her living hell behind the Iron Curtain.

While growing up Ida became enchanted with the notion of the “American Gangster”, hearing stories of organized criminals and other men of will making it big in the land of opportunity through guts, guile and sheer determination. It would come as no surprise that Ida immigrated to Paragon City for all the wrong reasons shortly after the Berlin Wall fell. Ida Bauer was a memory abandoned in East Germany; The self-styled Ida Koeing was going to make it big in the City of Tomorrow.

It didn't take long for Ida to fall in with bad crowds in Paragon City, diving head-first into the violent gang life, eager to prove herself and treading where other more reserved crooks would hesitate. It's no small coincidence that this would lead to Ida's first encounter with superpowered heroes and a fated, humiliating defeat at their hands.

As vicious, bold and clever as her upbringing in Berlin had left her, Ida Koeing was severely unprepared for her first encounter with a superpowered individual; Specifically the young hero Iron-Strike, who dropped in mid-heist on Ida and smashed her severely with his enhanced strength before the police arrived at the scene of the crime. Ida spent the next 2 months in the Cygnus Medical Center and, while she managed to evade jailtime by lucking out on a technicality, the damage to her ego was done. It wasn't enough to be good in the City of Heroes.

Spending 2 months in traction gave Ida a lot of time to think on her situation and in the end the conclusion was simple: If she was going to make it as a big-shot ganger against spandex-wearing crimefighters in Paragon City, Ida Koeing would need an edge. A personal edge. Something that would level the playing field and couldn't be disabled, taken away or ignored. The solution would be personal enhancement; The method would be the drug Superadine.

It took the better part of 6 months after leaving the hospital but Ida managed to subtly secure a potent, pure dosage of Superadine for herself. While she admittedly didn't fully understand the magnitude of 'Dyne's consequences, Ida was confident her iron willpower could control any impulse or addiction related to the drug. Ultimately she was correct: The drug held little sway over her focused mind. What she was not at all prepared for was one specific consequence of her action: The feeling of power. For the first time in her life Ida felt powerful. Truly powerful. The sort of power where she could impose herself on others through force of self alone. She hadn't leveled the playing field; She'd climbed to a higher level altogether, rising on a hazy cloud of chemical euphoria. She needed more.

Ida managed to resist the urges of her lust at first, carefully weighing her options and, being a little surprised by her sudden shift in appearance from Superadine, even taking time to research the side effects of various enhancements and ways to counter them. But, As time went on, Ida became more and more reckless in sating her never-ending thirst for personal power, eventually gaining the nickname Berzerkka for the insane chemical and cybernetic enhancements she repeatedly subjected herself to (and how, frighteningly, she showed no signs of fatally overdosing, nevermind slowing down.)

Berzerkka's rampage of psychotic self-mutilation finally came to a head when she assaulted Crowne Memorial Hospital in an attempt to seize a mutagenic compound being researched there at the time. She was stopped outside the hospital by a rapidly-assembled team of novice heroes, among them the young man who put Ida into the hospital over a year ago: Iron-Strike. It is unknown whether or not he recognized the green-skinned muscle-and-metal monster as Ida Koeing before he was torn in half down the middle, but Berzerkka managed to kill Iron-Strike and 2 other young heroes before being subdued, earning her a place in Ziggursky Penitentiary with multiple life sentences.

"Man is a tame or civilized animal; but if he be insufficiently or ill-educated he is the most savage of earthly creatures."

Berzerkka spent several years entombed in a specialized security unit at Ziggursky Penitentiary, her jailers holding her in a state of near-stasis given her incredible strength and savage demeanor, remaining imprisoned even during the initial Rikti invasion of 2002. It wasn't until a fated Arachnos attack on the Zig that Berzerkka would see the light of day again, when Arachnos troops mistakenly seized her as a candidate for Operation: Destiny. When delivered to Fort Darwin still in stasis, the savage but considerably weakened Berzerkka was casually cut loose on Mercy Island as yet another danger for fresh Zig rejects to survive. “The freak'll help cut the fat from the new meat,” a superior Arachnos officer was quoted as saying.

Left to her own devices Berzerkka rampaged through the ruins of Mercy Island, attacking Skulls and Hellions, Rogue Island Police and would-be villains, Longbow and Snakes and anyone else unfortunate enough to try and stop her, get in her way or otherwise earn her attention. Slowly degenerating into an animal-like savagery and driven by her addiction, Berzerkka sought any form of augmentation she could take and, sometimes, earn from those confident and/ or brave enough to deal with the TrollShow.

With Mercy no longer providing the resources or challenge she craved Berzerkka began moving across the isles; first to Port Oakes, earning a (un)healthy quantity of Superadine from the warring Family, then to Cap au Diable where troubleshooting (read: utterly destroying) some key problems in Aeon City scored her advanced cyborg technology. When the Green Giantess' path of destruction brought her to Sharkhead Isle she was approached by the Iron Wolf Cartel, a mercenary group operating in the Rogue Isles, who took Berzerkka on as an enforcer paid in refined Superadine; an offer her hunger couldn't refuse. Ultimately the “Survival of the Fittest” attitude of the Rogue Isles fostered Berzerkka's addiction to power perfectly, giving her plenty of room to rampage and grow.

By the time Berzerkka set foot upon Grandville she had developed into a cyborg of terrifying proportions, both in body and capacity for mass destruction.

"I assess the power of a will by how much resistance, pain, torture it endures and knows how to turn to its advantage."

By the time Berzerkka had gained notoriety in Grandville she had developed such high levels of strength that there was little left to legitimately challenge her day-to-day: Bullets and explosives were like styrofoam and wind, weights ranging into the hundreds of tons could be thrown effortlessly and even normally fatal wounds could be healed in moments. So, when a meager human in a suit calling himself Malak Idris approached Berzerkka looking for a fight, the Green Giantess couldn't contain her laughter. The man proposed a bizarre challenge to Berzerkka: If she won, he would leave her alone as she wished. If she lost, she would work for him in The Empyrean Mandate, a notorious anti-metahuman organization. Not one to be intimidated, Berzerkka accepted.

While the fight wasn't recorded or viewed by anyone else, Berzerkka's defeat was both total and humiliating. Unable to catch Malak while the human exploited weaknesses she wasn't even aware existed within her, Berzerkka was brought to her knees and forced to admit defeat. It's unclear what prompted Berzerkka to keep her deal with Malak – Perhaps some primal respect paid from a beta to an alpha, perhaps some semblance of personal honour left over from her human days – but the normally savage giantess went along with Malak's demands, joining the Mandate as a pet enforcer.

Malak's intentions turned out to be more benevolent than bragging rights and gloating over a defeated metahuman; The normally murderous man spared Berzerkka's inhuman life because he believed there was still a human being beneath all the cybernetic implants and genetically enhanced tissue, one he fully intended to bring back to this world. With that in mind Malak, working with the assistance of psychics within his organization, attempted a drastic and highly dangerous “mental surgery” to cure Berzerkka of her drug-fueled madness.

Unfortunately for Malak his operation worked far too well: With a final scream Berzerkka slipped into dormancy and Ida Koeing awoke for the first time in years, but now her eyes were fully open.

Money. Influence. Prestige. These are all false powers, powers that only survive within the gentle confines of a failing social order.

The era of the superbeing is quickly coming and humanity is on its way out.

In that moment of clarity Ida “Berzerkka” Koeing made it her mission to see this era made a reality as soon as possible, and Malak had ironically created an infinitely larger problem than an overgrown thug rampaging across the Rogue Isles.

The world was better off with Berzerkka being crazy, and that's the story so far.

Berzerkka originated as a blueside scrapper named Axxia, created in a moment of inspiration after meeting Tanya Atta. Axxia was a remorseful hero overcoming her fixation with cybernetic and chemical enhancement and trying to do good as a way to pay back society for her crimes. A lack of interest in playing the tragic hero type and a secret (not-so-secret by now, probably) love of very super-strong female characters saw Axxia remade on a whim as the opposite of her heroic progenitor: The monstrous, drug-addicted, cybernetics-obsessed Troll-Freakshow hybrid known as Berzerkka. The decision was a spur-of-the-moment thing and I never expected it to last: Imagine my surprise when months later Berzerkka had become my favourite and most played character.

Much like her agenda of self-improvement, Berzerkka's character backstory, personality and powers underwent a lot of revision and tweaking, influenced both by in-game events and my own desire to get my favourite villainess just right. It's been many months but I've finally settled on an official Berzerkka canon. So, what does one do once they've finalized their villain? Put them on Virtueverse, of course!

I've had a lot of fun role-playing Berzerkka on Virtue. I hope you enjoy reading about her.