Ryan Kelly (The Blue Titan) is the result of an experiment conducted by Dr. Alexander Gatsby, renowned Biochemist and CEO of The Gatsby Corporation. Obsessed with Super Heroes Dr. Gatsby failed numerous times to gain superpowers himself settling on creating and raising a Super Hero of his own.

Screening his own employees Dr. Gatsby found Philip Kelly, a mutant who's powers had been repressed at a young age by a forced overdose of suppressants. Dr. Gatsby pressured Philip into allowing him to be cloned and the child raised in a closed environment where his powers would be nurtured. Philip accepted Gatsby proposal, and for the next twenty five years Ryan Kelly was raised in secret.

Sins of the Father

Blue Titan is officially sponsored by The Gatsby Corporation. 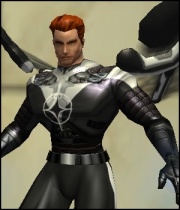 Super Strength, one of the two main powers passed on from Philip Kelly, made it one of the primary focuses of Ryan’s training. It was Ike Hutman (a.k.a. Allan Smith’s) job to help Ryan develop his powers both before and after his move to Paragon City. Before the move Hutman found improving Ryan’s strength to be quite difficult; one can only lift so many cars before the benefits become nil. However, after relocating to the Gatsby Corp. Headquarters, Hutman had access to proper training equipment; high pressure gyratory and impact crushers to increase Ryan’s strength immensely. The Gatsby Corp. has reported to the Paragon City Hero Registration that The Blue Titan’s upper strength limit measures as 'Superhuman: Potentially Incalculable' on the Offical Strength Scale.

The ability to fly was never one of Philip Kelly’s powers and thus could not be passed on to Ryan. However, during Dr. Gatsby’s experiments with genetic engineering he created an artificial gene, through bonding with a host would develop the ability to fly. This gene must be inserted into developing cells and could only be used on a pre-born host, because of this Dr. Gatsby originally scrapped his flight gene, as it was useless in granting him the power.

Flight, being an unnaturally introduced ability, causes Ryan to only reach top speeds which seem otherwise slow in comparison to other Heroes with the ability to fly. This makes flight improbable for Ryan as mode of traveling great distances (i.e. intercontinental, or beyond the earth’s atmosphere.)

The ability to create lasers from Ryan’s eyes came as quite a shock to both Ryan and Dr. Gatsby, however it came as the greatest shock to Philip Kelly who never knew he originally possessed the ability, or would have, had his powers not been suppressed as a child. Many Heroes have similar abilities to focus beams of energy, and at first it was dismissed as a natural development of Ryan’s abilities.

Later, during a routine genetic scan, Dr. Gatsby concluded it was due to the extreme exposure to radiation in the Terra Volta Reactor that caused Ryan’s abilities to mutate slightly. After this discovery Dr. Gatsby began testing Ryan to see if any other abilities developed.

After developing the ability to focus energy from his eyes Dr. Gatsby's tests showed that Ryan's vision had also mutated due to the reactors effect. Ryan's retinal focus had increased to nearing 20/2, sight comparable to that of a hawk. This ability, though minor, did spark Dr. Gatsby to continue his extensive testing on radiations effect on Ryan's ability under extreme conditions. 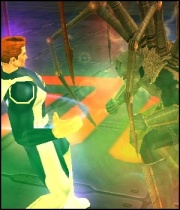 Ryan’s mutant abilities grant him little to no defense against the powerful psionic attacks of psychic foes. He is susceptible to mind reading, mental control, and any host of mental manipulation be it friendly or otherwise.

During the cloning process Dr. Gatsby made sure to implement a natural susceptibility to chemicals. This was done in order to insure Ryan’s compliance if he should become suspicious of his environment or the people he interacted with. An experimental medication know as MR-26 was used to keep Ryan in a state suggestibility, and to keep him from questioning certain subjects.

This weakness to chemicals, MR-26 in particular, was exploited by Ike Hutman in November of 2006*. In order to carry out his own agendas, he tricked Ryan into overdosing on the drug leaving him in a state of unquestioning loyalty. (*See Sins of the Father)

Dr. Gatsby was a cautious man, and made certain that if something were to go wrong during Project Titan* that Ryan could be neutralized if need be. Manipulating Ryan’s genetic development during the cloning process, an auditory command was conditioned into Ryan; a code word know only to Dr. Gatsby. This nonsensical word, spoken aloud, would shut down all of Ryan’s higher brain functions sending him in to a faux-coma. While this condition is only temporary it leaves Ryan completely helpless for several hours. This fail safe has never been used. (*See Project Titan)

This strange steam powered staff was confiscated after a battle with Nemesis Rex. The staff fires out bolts of energy particularly effective at knocking back foes.

This Crey issued Cryo pistol was confiscated as a souvenir after uncovering a conspiracy by Crey Industries. It fires an icy blast that traps and damages it's target. It is equipped with a targeting device making it very accurate, however it holds only one shot, and needs twenty five minutes to recharge.

This pack allows the user to leap great distances and continue to gain altitude while in midair. The jump pack has an automatic timer, and shuts off after thirty seconds of continued use. 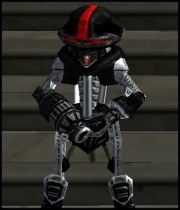 MekMan Automaton X, or M.A.X, is a small robot programed to assist Blue Titan in communicating with machines and technology. Given to him by the Gatsby Corporation. Unknown to Blue Titan, M.A.X is also programed to record and store information concerning Blue Titan; where he goes, whom he speaks with, what criminals he battles. The purpose of these recordings is unknown.

The Omni-use Relay System (O.U.R.S) is a small electronic device, originally designed by Positron, it allows the user to communicate with Super Group members, or team mates over long distances. This device also acts as a tracking and recall unit; base teleporters are able to lock on to the O.U.R.S signal and recall the user to their Super Group base. Due to the heat created by the device after a recall, it requires a cool down of thirty minutes.

This Gold Member's Club card issued by DJ Zero allows it's bearer to teleport to 'Pocket D,' the premier nightclub for super powered individuals, located in the pocket dimension created by it's owner.

A handful of black sand recovered from the city of Oranbega. While holding the sand Blue Titan has the ability to deal a flurry of punches charged with the Negative Energy of the Netherworld. 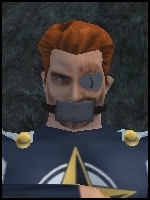 In an attempt to clone the Hero Blue Titan, Aeon Labs failed numerous times. Some of the clones grew as horrific beasts, others with dissimilar powers. Unaware that the Hero Blue Titan is a clone himself, they eventually decided to scrap the project and destroy their failures. However, during their clean up one of clones escaped. With a shattered mind the clone wandered the streets confused and with only fractured memories to guide it. The only certainty it had was the fact that it was The Blue Titan. This delusion was destroyed when the clone came face to face with the real Blue Titan; unable to deal with this situation the clone was thrown into a rage. Ultimately being outcast to the Rogue Isles the clone now fights to prove that it is the real Blue Titan, no matter what the cost.