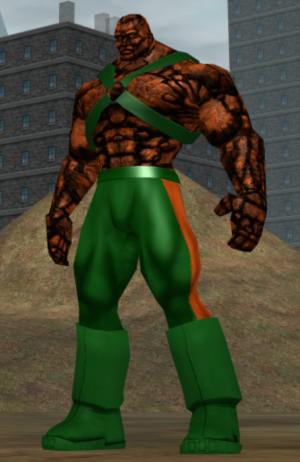 Steve Stone was born in 1975 to working-class parents living in Seven Gates, Brickstown. Growing up in an apartment that was quite literally in the shadow of the Ziggurat, the allure of an illegitimate living was ever-present. In fact, as he advanced through his teen years and into adulthood, he witnessed several of his peers gradually turn to a life of crime. Stone was never a high-achiever, either; he dropped out of high school and never even dreamed of college. However, he was determined to make an honest living, and had moved into construction work by the late 1990s.

Staunchly socialist and a leading voice in the union movement, Stone had become a crew foreman by the turn of the millennium. He gained a reputation for being one of Paragon City's most hardworking contractors (if a little rough around the edges), played an instrumental role in efforts to reconstruct Paragon City's worst affected neighbourhoods following the Rikti War, and had established his own construction company by 2005. It was while preparing to lay the foundations for a new social housing block in Kings Row that his life changed forever.

In the middle of a heatwave in the summer of 2010, Stone's foundation surveyor detected a cavernous void beneath the plot upon which his new development was to be constructed. Determined to finish the job he started, Stone instructed his crew to dig a tunnel into the mysterious cave and – with his site manager, an ex-con by the name of Carl Cranston – made his descent. Beneath the ground, Stone discovered barrels upon barrels filled with a thick green liquid – all of them marked, faintly, with the Crey Industries logo.

Just as he was returning to the surface (with a mind to report Crey to the PPD for illegal dumping), the cave suddenly collapsed, splitting open the long-forgotten drums and dousing both Stone and Cranston in acrid chemicals. Both men lay buried in the rubble for several hours as rescue efforts were mounted, and neither of them emerged quite the same as before. Cranston soon discovered he had gained the power to control and manipulate carbon. Stone was, perhaps, not so lucky. When he was finally dug out of the ground, he was barely distinguishable from it; Crey's formula had rearranged his genetic structure, irreversibly bonding his skin with clay and rock.

Initially, Stone had no interest in doing anything with his newfound powers; he had never dreamed of being a hero and, in fact, was highly suspicious of the superhuman community (perhaps because he had spent much of his life clearing up its messes). Instead, he spiralled into a period of depression as he discovered his condition was irreversible, and retreated from friends and family as he came to terms with his new existence.

Stone was eventually drawn into the life of a superhero when his colleague, Carl Cranston, began committing a series of crimes under the alias Coalmine. A sense of personal responsibility drove him to intervene, and he eventually put Cranston behind bars. This deed gave Stone a much-needed confidence boost, and he gradually returned to his everyday life. He was forced to return to crime-fighting, however, when the pyromaniac Arsoner burned down a number of his construction sites, and again when the subterranean supervillain Earthworm caused one of his projects to collapse. As he used his powers to protect his interests, acting more as a vigilante than a hero, Stone began using the alias Brickyard. He joined Hero Corps shortly afterwards and offered his services as a hero-for-hire until late 2011, when he struck up a crime-fighting partnership with Android. Slowly (almost accidentally), Stone transitioned into the life of a superhero. By day he managed his construction projects; by night he patrolled the streets.

As Stone was just getting used to his life as Brickyard, he became embroiled in an event now recorded in history books as the Battle for the Multiverse. On 30 November 2012, Rularuu the Ravager escaped the Shadow Shard and began to systematically absorb as many dimensions as he could. When he arrived in Primal-11, Brickyard's home dimension, he was repelled by the effort of thousands of heroes, villains, rogues and vigilantes. With Xanatos and Mr. Mud leading a full assault against the Ravager guided by master tactician Nimrod. Rularuu was distracted long enough for The Phantom Visage to return him to the Shadow Shard, but thousands lay dead in the aftermath.

Brickyard fought with Charon and Springfist against the Soldiers of Rularuu in Kings Row, and witnessed both men die at the hands of the Ravager's horde. When the dust settled, he and Android made a pact to never allow such an event to happen again. Together, they formed The T.E.A.M., or the Tactical Emergency Assistance Movement, a loose coalition of heroes dedicated to protecting Paragon City, the world and even the multiverse from significant threats. Android and Brickyard were soon joined by others, chiefly Metal Mage, Canid, Blacksmith, Fastback, Bandage and Springfist's granddaughter, Springfoot.

Since establishing The T.E.A.M., Brickyard has sold his construction company and become a full-time superhero, though he sometimes struggles with the line between justice and pure vigilantism; Android acts as the moral compass that Stone occasionally lacks. Currently, his attention is focused on the threat posed by C.R.I.M.E., a coalition of criminals that includes some of his most frequent foes, including Coalmine, Reacto, Arsoner and Killer Chill. 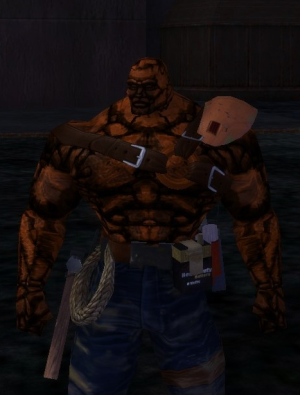 Steve Stone's body has been bonded to clay and rock, meaning that his skin is effectively impenetrable. He is highly resistant to all forms of physical attack, and is largely unaffected by extreme temperatures. The Paragon City Times has dubbed him "Brickyard, the Immovable Man" due to his ability to withstand extreme force, and he has directly traded blows with such powerhouses as Black Scorpion, Vandal and Dreck.

He uses his powers in an offensive capacity by morphing his limbs into blunt instruments made of solid rock: enlarged fists, hammers, axes, maces and spikes. Brickyard also possesses superior strength, and is able to lift anything equal to or below the weight of an average sized truck. He is capable of lifting heavier objects, but only with considerable strain.

Brickyard briefly worked for Hero Corps, and has since achieved honorary membership of Longbow and Vanguard. He is also a reserve member of the Freedom Phalanx, a title bestowed upon him by Back Alley Brawler. Along with Android, Brickyard is the co-founder of The T.E.A.M., a group that maintains a diverse roster of heroes and vigilantes who come together to tackle significant threats. Thus far, The T.E.A.M. has been assembled to tackle Colonel Duray, Reichsman, Lord Recluse and Hro'Dtohz, the Rikti Lord of War. Its governing council is currently considering how to deal with the threat posed by C.R.I.M.E., a coalition of its most frequent villains.

The T.E.A.M. is headquartered in the Workshop, at one point Android's personal base of operations. The Workshop is a converted warehouse on Brickyard's home turf in the Seven Gates district of Brickstown, which has been equipped with the latest technology using a financial donation provided to the group by Longbow. The Workshop also contains a portal to the Librarium Arcanus, a magical library once maintained by The Phantom Visage and now overseen by Metal Mage.

Brickyard maintains an informal crime-fighting partnership with Android, and his closest allies are his other T.E.A.M. mates, including Metal Mage, Springfoot, Canid, Bandage, Blacksmith, Valoress, Fastback and Mr. Might.

Brickyard's archvillains are Coalmine, a villain who gained his power to control carbon at the same time as Steve Stone's body was transformed into rock, and Earthworm, a villain who uses a stolen Nemesis mole machine to tunnel underneath Paragon City and has tangled with the hero on several occasions. Several of Brickyard's other frequent rogues are now members of C.R.I.M.E., including Reacto, Arsoner and Killer Chill.