The Fearsome Fool is as his name suggests; a scary jester! He is enigmatic and fickle, and is known to go from mild-mannered and serious to silly, chaotic and quite mad! Aside from his usual silly, happy-go-lucky personality, he has moments of bitterness and depression, which he shares with various friends and acquaintances. He is known for his childish, occasionally sick and twisted humor and occasionally hurtful and raunchy comments and jokes. For the most part, the Fearsome Fool is someone that people either instantly love or instantly hate, as an entertainment, or as an annoyance.

Stories are told of a court jester of days old. He grew tired and restless of being the 'royal fool', and wanted to be respected. He seeked power that was never meant to belong to mortal men, and strove for eternal life. His desire for power eventually drove him to make the biggest mistake of his life. The poor, power-hungry fool struck a deal with an evil, nameless deity of madness. At the price of what little sanity he had left, the jester was granted amazing powers to bend the minds of others to his will, or even obliterate the minds of others completely. In the process opf being granted his powers, the jester was horribly disfigured, appearance becoming 'odd', monstrous even. After achieving his new powers, he would pull the strings of his new 'puppet king', eventually bringing his kingdom to ruin, and shortly after, murdering his former king completely. 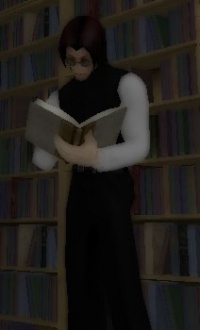 Trivia and Out of Character Information