Grifolken is the "old fuddy duddy" in his group of companions, dark elves especially. He has always felt those around him are hopelessly reckless and require more wisdom(common sense) and he will use opportune moments to remind them of such, like when they're being ressurected. He is proud, however not foolish and definitely not built for melee combat. He considers himself the brains of the "Underworld Legion". 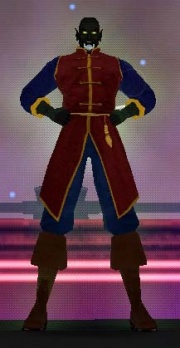 Grifolken in his homeworld, casual attire.

Grifolken is a Dark Elf High Priest of Neriak(cavern city) which is located deep in the forest of Netlukos.

Grifolken strictly adhered his priestly duties and did not make alot of time for pleasantries or activities outside of the temple. (Book Nerd) Other than travelling with Transhade and Xephirra there was one other worth mentioning... Hottbiscuit Dreadmuffins. She was also a Shadow Knight and was fond of Grifolken as was he of her. The only dark elf woman Grifolken ever found enticing enough to lure him away from his studies.

Grifolken and his companions were deep in the Plane of Nightmare when a portal opened up creating a great vacuum, which engulfed them. Upon arriving on this world they were greeted in a very unhospitable manner, imprisonment. Transhade was able to break free before being imprisoned and managed to escape the clutches of the Circle of Thorns eventually bringing back a rescue party of various heroes to save his wife, Xephirra and friend, Grifolken. Unfortunately before Transhade was able to convince and return with a sizable enough force to assist him the Circle of Thorns has already begun experimenting with their new captives.

The Circle of Thorns were attempting to tap into other planes of existance and reap more power for themselves. Those unlucky individuals who got captured by their grasp were then tortured and eventually merged with the dark powers they wield in an attempt to create demonic slaves. Grifolken and Xephirra both suffered the same fate of being demonically mutated against their will. Neither of them under went this process long enough for it to take hold mentally, however the physical mutations remained. Grifolken has managed through sheer willpower to make himself appear as he once did, but when exhausted or continuously exerting himself, his demonic visage becomes readily apparent. 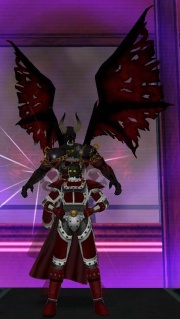 Grifolken in his Mystic Armor during demonic transformation.

In a further attempt to fit in with the society of Paragon City and finding himself as always interested in the larger human women(Normal sized for Norrath, his homeworld), Grifolken went to Steel Canyon seeking fashion or disguise advice from whom he was told was THEE person to speak too. Serge, manager of the Steel Canyon "Icon" fashion store. Grifolken purchased a suit in which he thought a bit bright, but was told "This will SOOoo help you fit IN!". After being spit at, slapped, having drinks thrown in his face, etc... Grifolken realized he had been cheated and felt not only embarassed, but extremely pissed off. He was being referred to as a pimp, this was apparently not a good description of ones character and a decidedly bad choice of careers; which defines itself as one who loans out poorly treated slaves (usually women) for pleasure and reaps a large profit from their labor. When Grifolken found this out he immediately went to Icon and attempted to return the "Pimp suit", but Serge told him No Refunds on custom made outfits. Outraged by this Grifolken swore to Serge "that when the day comes he would be the first to be broken" and stormed out.

A friend and student learning the dark magics, had suggested various outfits understanding his need to fit in and despite her overwhelming amounts of kindness he simply refuses to have any dealings with Icon what-so-ever.

10/01/07 - Madeline Xion approached me asking for assistance with her "magical bindings" today. Two rings she wears, some what similar to ring of protection, but they work in the opposite manner keeping stuff in rather than out. Madeline is apparently the offspring of a demonically possessed human and a human witch. The bindings were given to her upon birth, however the magic is starting to fade due to her constant use of the demonic powers within her. She wishes to cling onto her human appearance while continuing to use her powers, hence the reason she came to me. After much thought and quite a bit of casting I was able to set the rings into a pair of gauntlets which themselves are invisible unless worn. The gauntlets are created of the same material as the chains I wear to contain the demonic influences on myself, Eldritch Gold, one of the few worth while and magic capable materials this world has. The gauntlets themselves are admittedly cumbersome and etched with magical runes similar to those found on the inside inscription on her rings. I made sure to remind her that I'm unaware of how long the gauntlets will suffice if she continues to use her demonic powers as often as she does. I also explained this and a few other things to her mate, Taran, who seemed concerned for their future.

Grifolken trying to "blend in" despite his pimp suit.

An Everquest 1 character remake as are all of the dark elves in Underworld Legion.