In the interests of furthering Questionably Practical Science, a Japanese scientific conglomerate by the name of Fujihara Industries sought out a sample of the gigantic world-consuming amoeba that is the Hamidon, with the intent of culturing it in an attempt to glean some sort of knowledge from it that would benefit mankind. The odds of this happening were highly unlikely, but that's why it's called Questionably Practical Science and not, say, Immediately Useful Science.

After no small amount of effort[1], the science team was able to infiltrate the Hive and gather a bit of the Hamidon, transporting it back to the lab with all haste for further study. Months passed, with the finest biologists, physicists and chemists carefully analyzing the sample, coming up with ways to duplicate it and bend it towards a constructive purpose, one for the benefit of mankind. Finally, after nearly a year of non-stop study and 12 billion yen in investments, they presented the board of directors with the fruits of their labor: An anthropomorphic, walking, talking blob of sentient goo.

Damn it Japan, what the FUCK? Seriously?

Being in a superhero universe lab the security at Fujihara Industries was notoriously lax, enabling her[2] to break out the moment nobody was looking. She immediately made a beeline for Paragon City (the offical Center Of The Universe) and is currently scourging the criminal element in the name of... herself. Well, technically in the name of the Hamidon, but since she is the Hamidon... yeah. Man, they'll give anybody a hero license these days. 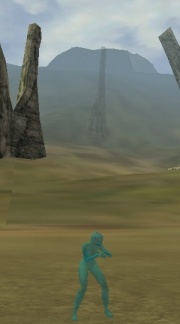 Hamidon-tan in her native habitat.

Hami-tan tries to come across as a super-intelligent and utterly dignified threat to humanity, regarding them with casual indifference when she isn't engaging in megalomaniacal gloating about how boned everyone is once the ecological hammer drops. Unfortunately, she's not half as smart (or powerful) as she thinks she is and has a tendency to be victimized and pushed around by practically everyone she comes across, making her more a cosmic butt monkey or object of pity than anything else. She also has a bit of an inferiority complex over losing "her" place as the major endgame boss to a Riktified limey and some Roman possessed by a space squid. Not that she's bitter or anything.

Being a small-scale version of the other, larger flora-mutating monstrosity, Hami-tan can rapidly mutate and animate plant life to do her bidding. Most of the time it's only pods of fast-acting soporifics or hallucinogenics, but when the situation calls for it she can entangle her foes in twisted masses of roots and vines as well as cause other, larger vines to burst out of the bodies of the dead and dying, pelting the survivors with barbed thorns coated with potent neurotoxins. As if that weren't enough, she can call up walking man-sized plants to take a few chunks out of anyone who isn't unconscious, tripping balls, torn apart, paralyzed or poisoned. Pleasant stuff.

Through a complex chemical process that, for the sake of brevity, will not be described here, Hami-tan is able to produce a completely different kind of goo chock-full of enzymes and adrenaline [3] that can be used to alter healing rates of tissue, speed up or slow down metabolisms and/or alter the rates of lactic acid build-up in muscles as she chooses. Usually, she chooses to have all the good stuff happen to people she's working with and all the bad stuff to everyone else. This entails some degree of close proximity to hostile forces, but since they're all unconscious, tripping balls, in the process of getting torn apart, paralyzed and/or poisoned (see above), it's a lot easier to get away with than you'd think.

As for her allies, the thought of how generally disgusting it would be to run around covered in a thin layer of slime is usually overshadowed by the realization that holy shit, I just used Foot Stomp and this entire mob just freaking melted and oh man is Dull Pain permanent now this is completely awesome etc etc. The best part is that there are probably no long-term side-effects and the chances of being mutated into a Devoured are so low as to be practically nonexistent!

To make up for the fact that she can't actually take a hit without splattering, Hami-tan devised a way to protect herself by supporting her endoplasm with mutated lichen-coated rocks[4], forming a Bedrock in and around her that blunts most hand-to-hand weapons and small arms fire. It's like the most low-tech suit of powered armor ever.

Said lichen can also penetrate cracks in concrete and stone, breaking it into handy throwable chunks that Hami-tan can then hurl through the air with enough force to send grown men sailing back several yards. Having the physical consistency of gelatin, this technically shouldn't be possible, but she does it anyway because logistically speaking, it's pretty funny.