Thor's personality is always well maintained; he steps forth hot-tempered and violent, but also frank and good-natured in the extreme.

And so the tale is written

Thor is the bloodson of Odin, lord of the gods of Asgard, and Jord, who is also known as Gaea, the elder goddess of the Earth. Odin sought to father a son whose power would derive from Earth as well as Asgard, and hence he sought to mate with Jord. Odin created a cave in Norway where Jord gave birth to Thor. Months after the infant Thor was weaned. Odin brought him to Asgard to be raised. From that time onward Odin's wife, the goddess Frigga, acted as Thor's mother.

Amongst his many siblings, one in particular oft caused much mischief at the dismay of Odin. A son born of frost giants, but taken in by Odin as to keep most frost giants from attacking Asgard, Loki grew to be a barbed thorn in Thor's side. Loki was the god of mischief, chaos, and fire and these were his chief goals. This is how our tale begins, because it is Loki's dealings that brings Thor to Paragon City.

Steel Canyon University, home of the Canyoneros and the Fraternity house Alpha Beta Kappa, happened to have several would be heroes enrolled. Alpha Beta Kappa was having another of its nightly rampant raves of sex and booze, with he who would eventually become the Pink Awesome at the center of the festivities drinking heavily and badly flirting. But, regardless of how many topless women are in the room, when you gotta go you gotta go. He stepped outside to relieve himself behind the building, when suddenly pink electricity zapped him...

Loki's ploys did not end there. He's driven many mad! A crazed homeless man, named Thorhalla, wields a sledge hammer and a man-hole cover for a shield and believes himself to be Thor due to Loki's meddling.

After several villains attacked Atlas Plaza, Thor along with Sovereign Warhawk, Belle Barium, and other valorous heroes threw them back. When Belle challenged Thor to a duel, the two were ambushed by a bound demon whose body grew bone plating which took the form of a child's face, and spoke with its voice. With much effort, Belle and Thor forced him to flee. Finding a half hearted victory, Thor pledged himself as sworn battle-brother to Belle.

Thor wields the power of the stormrage, allowing him to conjure lightning, thunder, storm clouds, and rain. By throwing Mjolnir up and holding on, he can take flight. The belt of strength allows the god to lift the hammer Mjolnir.

When separated from Mjolnir, Thor loses most of his god-like power on this plane. Psionics are also foreign to the god, and he has no resistance to them.

Order from Left to Right 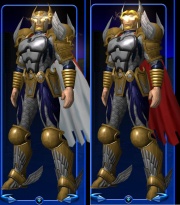 "Forged of Uru metal, Asgardian armor is worn through the fiercest of battles!"

Hammerstorm is based more on the myth than the marvel comic, but I'm a sucker for the picture at the top, so I went with it. The Undaunted are almost entirely made of friends from another game