Technically not super powered, nor always conventional, Belle herself is a unique heroine in Paragon City. She is just over five feet of willpower in a radiant yellow dress. Her family has had secondary ties to the crimefighting community for decades, often in roles unsung and unseen. While often overshadowed by the more prominent entities in Paragon City, this young woman is the first in her line to come out of the background, and become a recognized hero.

Before Belle Barium had come into being, this girl started her life in Paragon City as Allison Marasel, an average student who didn't seem destined for anything after her senior year. After her family moved to Paragon, she suddenly found herself an object of attention, being the daughter of both a famous researcher, and a famous inventor. In fact, her whole family had hands in the advancement of crimefighting technology, dating back before the first World War. High expectations had a counter-effect on her, and Allison didn't feel she could live up to any kind of greatness. She spent her time buried deep into escapisim, and quietly writing her hours away. Her parents were working for days, almost weeks at a time in their lab, so Allison was nearly always alone.

Trouble began brewing before too long. If Allison had not decided to come see her often-absent parents at work..

The 5th Column had a special interest in the weaponization of sonic technology that was being developed by a select group of researchers, headed by Maria Marasel and Alexei Anther, noted academics in the pre-Rikti war days. The attack was ruthless, the lab security was quickly overwhelmed, and the first response team of heroes sent to the scene had failed, defeated by the hands of Vandal and an elite reinforcement unit. It was too bad that when they got to the main database, all of the files were deleted.

They decided to take the next best thing, which was Maria Marasel, who was unfortunate enough to be at the wrong place at the wrong time. Her daughter, Allison, was also right there, in that room in which they were all hiding, just as Vandal shoved through the reinforced doors effortlessly, a full troupe of Raserei Ubermenschen behind him.

While her mother was frozen with fear, Allison bought time by playing a ruse on Vandal, telling him where the technology supposedly was, leading him through a winding pathway below the lab. He led him, and most of his entourage away, successfully - though Vandal was furious when he got wise to the fact that Allison had led them into the sewers. He wasn't in the mood for charity, and took some time to express his displeasure through force. By this time, a more powerful response team of heroes had arrived, led by the hero, Novaian. They found Maria Marasel, who had rescued herself by defeating the Columners who were left behind to guard her, and chased off Vandal. Then they found Allison, just in time to save her.

The resulting media coverage sparked a small outrage for a few short months, and gathered a sharp upsurge in hero sentiment, though the Rikti War soon overshadowed this incident completely. Alexei went into hiding since the day of the attack, remaining underground somewhere in North America to avoid capture to this day. He and Maria were to later divorce, rumors being that Alexei had somehow brought the attack down on themselves, perhaps even selling out to the Column.

The ordeal left Allison with multiple injuries, and nearly dead by the time the second response team had arrived and defeated Vandal's attack force. A great deal of effort was made to keep her alive, even to he point where she had to be moved from hospital to bunker, to hospital as the Rikti were attacking overhead. Her mother, a normally unapologetic woman, was seen crying for hours at her bedside, while Allison just lain serenely in her state of unconsciousness, almost smiling.

Allison could only describe the days in her dreams as a life where nothing bad had happened. Where all that existed was a happy life reading comics with a boyfriend named Ian. Ian himself was a mysterious entity, being Allison's same age, but never having been to school anywhere in the state. Still, they hit it off quickly, it was just too bad that even where she was, time was a finite object. On the last day they saw each other - he warned that relative peace would not last forever, and that war would part them.

Very soon afterwards, she was in the middle of a Rikti battlefield in the middle of Pereguine Isle - with a horde of Rikti troops advancing towards the site where Portal Corp was established, with heroes and the remaining military trying to hold the line at the labs. With the advancing alien forces behind her, she ran. She ran even as plasma blasts and rockets flew over her head. Nobody even looked at her as she jumped over the barricade and wandered inside. It was like she was never seen at all.

Through the security checks she wandered past, down into the labs lower levels. Past soldiers, heroes, researchers and scientists rushing about. She even spotted a glimpse of her mother, rings under her eyes, wearing sunglasses to somewhat hide the fact. Nobody seemed to see her at all, even then. She walked further down the metallic halls, turned the corner and found the portal..

Belle possesses an overall average standard of speed, strength, and agility. She seems strictly human on first glance, though on rare occasion, she has been shown to be touched by the same strange force that has blessed random heroes throughout the city. Possibly due to this, she possesses high resistances to cold, heat, and radiation especially, at least for a human being. She also seems to have an increased endurance, able to withstand somewhat more than a human being should be able to take without severe damage.

She possesses small devices in the palms of her hand, and on her breast plate that allow her to manipulate sonic waves to focused targets. Silver by color, metallic, but very small and often unseen, these devices were cut from a mysterious stone that emitted weak sonic waves after laying in sunlight. The technology was amplified, then eventually perfected by Maria Marasel's research team, and a custom set was sent to Belle to use. The sonic waves themselves are concussive in force, and have roughly the strength of a superhuman punch. The devices can go days without being recharged, although the charge tends to die faster in darker, more shaded areas like the Rogue Isles.

Belle is also a practiced archer, starting out as a hobbyist at home, then using her bow heavily in the field when the need arose. She has no formal training, aside from her missions and patrol duties, eventually becoming a very capable archer in battle. She prefers to play to her family's technological support, and uses arrows with various effects and payloads, rather than traditional piercing bolts. All of her arrows are considered heavy weapons grade, most of them with the specific purpose of supressing super-powered beings.

She also has a handheld device that can teleport her to anywhere within a set distance, and within her line of sight. The teleporter has also been set to special beacons in various spots through Paragon City, including the base she shares with Dr. Forkensphoon, and the inter-dimensional Pocket D - for whenever she needs a quick break, some drinks, or possibly a few minutes of dancing. The gadget itself runs on solar power, or a pair of "D" sized batteries that are good for only one charge before total depletion.

The Associates of Science

When Belle had found out about the source of her powers being stolen from a villain, she had trouble coping - and her performance had suffered. She was kicked off a Terra Volta task force after nearly allowing the reactor to go critical. With Grand Inquisitor's Foundation having been disbanded, and her mother still in hiding, Belle was left with almost no support network and suffered tremendously.

Doc quickly took Belle under his wing. He and his co-hero, Jenny Device, nurtured her back to confidence, and self-esteem, even helping her join the prestigious super-team, Aurorae.

Belle is now the acting co-lead for the Association of Associated Scientific Associates of Science, which was reformed after Doctor Forkensphoon left Aurorae.

At first it might seem that Belle has a detached relationship with her mother.

Maria Marasel spent more time working and partying rather than parenting when Belle was younger, only coming around just after the series of events that led Belle to be a hero.

Now that Belle is into adulthood, Maria often tries to treat Belle like a chummy friend, rather than a daughter.

Maria is currently single, and seems determined to stay that way. Belle's father, Alexei - is rarely ever mentioned.

Up until now, Belle has hardly ever talked about her father. Now she seems intent on finding him and finding out why he disappeared. Clues have led Belle to search in other parts of the country, even back in her childhood home. This circular trail led her back to Paragon City, and the latest lead is pointing her straight towards Praetoria itself. 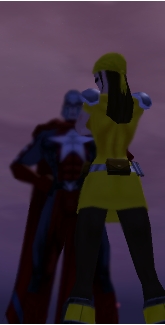 Belle has looked up to several prominent teams such as the Freedom Phalnax, even before she became a hero.‎