The legend goes about the great and powerful Mal'Gorath. Mortals of young and old sold their souls for a mere taste of the demon's power. His power was unique in nature for he could not crash down the heavens with a murmur of a spell nor could he summon his brothers from the deepest depths of hell. No, he held the greatest honor of being gifted with the power of knowledge.

He knew everything in the ways of the magical realm. So many sought out for just a mere piece of his knowledge of the arts only to be consumed by the little details Mal'Gorath left out. Oh how he loved to play with mortals in that way. Too trusting, he thought to himself.

But after so many years of the same game over and over, he grew tired of his game. For all the knowledge he had, he lacked true power for himself. He had the knowledge of it! Why not act upon it? So Mal'Gorath used his knowledge to gain the power he knew all too well. It wasn't long before he found his strength to be beyond human understanding. He could have anything if he willed it! Truly, the will of Mal'Gorath was unbreakable!

... but then, he noticed a flaw in his logic. For all the power he gained, he felt the tiny threads of his sanity beginning to slip away. Without his mind, he'd lose his knowledge... and without knowledge, he could not wield his power. What is the point of power if you don't know how to use it? With limited time to spare, he devised an ingenius plan!

The very toys he played with also could carry power and knowledge. Their minds were fragile, yes, but they were capable of things far beyond what he could do. If he tricked a human to bond with him, he'd keep both power and knowledge... he'd become more then just a demon.

So with his body stored in a crypt of his design, he transferred his very knowledge into an ancient book. His mind and soul also resided in the book and let it rest 'harmlessly' to the mortals above. The Book of Mal'Gorath would await with much knowledge of the arcane world and forbidden secrets of the arts... for anyone to see.

But for those who dare to seek Mal'Gorath's knowledge, they will pay a price. For all he needs is a human body and mind, gender not required. Just one... One will do. And the day he finds that one, Mal'Gorath will rise once again and he will take many souls with him.

That is the will of Mal'Gorath. It cannot change. It cannot be broken. His will must be enforced.

(DISCLAIMER: For the rest of the backstory, visit Seiken's page to learn more about Julius!)

Despite the legend, Mal'Gorath did not understand mortals nor what they are capable of in desperate situations.

The Book of Mal'Gorath had manipulated another mortal, Julius, as usual and, as usual, driven the man insane to require his knowledge. And, as usual, the mortal was thwarted and the book was locked away to be forgotten until someone else came along for him to manipulate.

Julius was a stubborn fellow and, to Mal'Gorath's surprise, witnessed Julius' return years later and breaking into the vault where the book was stored in. Back in Julius' hands, he wanted nothing more then revenge against Emlyn and his family. He'd sell everything just to get away with the ultimate revenge.

He took advantage of the situation and made a deal; vengeance in exchange for a body. He needed only one from the family and he'd earn what he truly wanted. The deal was set and their eyes set on their chosen target: Emily Engel.

Emily Engel wasn't interested in magic nor following her grandfather's legacy. She was more interested in technology and finding the little ways in breaking it via hacking. Her older sisters were more then happy to take up their grandfather's work and study magical artifacts in his company. Emily wanted to follow her own path and not the Engel name.

It led to many arguments with her grandfather.

Such an argument led her to storm out of her grandfather's apartment and onto the streets. Emily didn't see her kidnappers coming nor never got to see the death of her entire family at the hands of a madman nor her grandfather's soul banished into a soul stone and forced to occupy a mystical sword.

Mal'Gorath's will would be realized... even if such an extensive process of fusing a powerful demonic form into a mortal's would take time. Ten years, to be exact.

Neither of them took their grandfather's will into consideration. With the blade forced to watch the process for nearly nine years, he had figured out the blade's magical properities and potential psychic links to talk to others. He used that psychic link and all of the magic he could muster to sever Mal'Gorath from his granddaughter before the ritual could finish.

It carried a price.

The ritual was 90% finished, with the body of Mal'Gorath and his granddaughter nearly one entity. The psychic and magical surge in her mind wiped out plenty of her memories as well as causing mental damage to her memory. The granddaughter he knew was destroyed forever and in its place was a new entity.

Luficia stumbled out of that tomb disoriented and confused but she was alive. Thats all that mattered... and unbeknownest to the blade, the ritual gave birth not a destroyer but something greater.

Luficia fought with the Steadfast Pact, and then solo, for many years. She took part in the Praetorian Wars with all the other heroes when Tyrant led the invasion, becoming one of the new incarnates. It was... odd, to say the least but she would do anything to save her home.

But even Luficia desired respite, having parted from everyone else for one last time. As far as the public knows, Luficia had gone off to fight in another dimension and hasn't come back. Any attempts to reach out to her or to figure out exactly where she went always came up with nothing.

Luficia remains missing to this day.

She is the embodiment of positive reinforcement. She is the heroic cheerleader of all cheerleaders. When evil looms over the horizon, she is there and ready to strike despite the odds!

Luficia is very positive even in the darkest of situations and refuses to give up under any circumstances. In some ways, Mal'Gorath's 'will' manifested into her own and has led her on the idea to keep fighting until the bitter end. Unfortunately, the positive nature has led her to cross into child-like antics despite her age. Its caused her to be called 'little girl' or 'child' and this has caused her temper to flare over it.

Despite it all, she is a good natured young woman who trusts anyone and anything... well, almost, the training with Replacer has led her to question a few folks but the trusting nature has led her to befriend hero and villain alike. Not many get to experience her mature side that manifests when she's working her desk job or raising the son she adopted many years ago, Jeremiah. Half the time, though, her short term memory left her to write a lot fo things down or else forget things... and, mysteriously, the memory loss is getting worse... 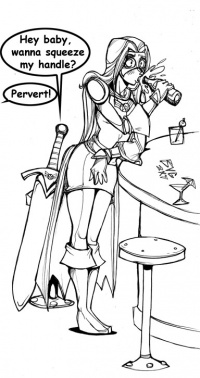 A "wonderful" example of how Seiken deals with women in Pocket D! Artwork by Drunkfu.

Curious of what she went through? Read here!

Please note that anything after 2011 is not considered canon to the character of Luficia. The only thing would be the last meeting in the park together before Virtue shut down for good.

After one last reunion in a beloved park with Xanatos, Ascendant and a few other old faces, Luficia allowed herself to retire and raise Jeremiah in peace. However, the very thought of watching him have children and growing old while she remained ageless bothered Emily. There was no death for her; only immortality. There was so much she could do and even her grandfather longed for an ending.

There was talk with her son and Seiken but the decision became clear; they wanted to die. How does one kill an immortal? Even with splitting the Mal'Gorath from her would work but while weakened, immortality would still be a part of her. It took months combing through the family's old tomes and rituals until she discovered one of her grandfather's forbidden rituals;

How to create a homunculus.

Creating a human being using herself once the demon was purged out of her was ideal but it would be a human without a soul. Without the soul, they would be no better then a zombie and lack purpose. It was Seiken's idea to use his soul stone to repurpose it and artificially create a soul. With both homunculus and artificial stone forged at the same time, it would allow the stone to attune to homunculus and let her feel, well, like any other human would.

It was all theories and speculation though; they had the numbers and the idea but not the proof. There was no way to experiment to see if this could work without breaking every ethical law in the book. No one knew except Jeremiah of what she intended to do so all they could do was do the math, set up the ritual circle and work to forge the soulstone with the stone, Seiken and Emily's souls ripped apart with other magical energies to "forge" an artificial soul.

Splitting Mal'Gorath from Emily was easy enough and far more easy to let the demon loose to let heroes or villains destroy that half of her. Jeremiah watches the whole ritual take place and one last smile to her son and with parting last words:

"I'm wish I could be here to see how my daughter becomes but I think... everything will be alright. Raise my daughter as your own. Teach her. Let her make mistakes. Have her find her own path in life... and... if you ever see Xanatos again, tell him--tell him that I love him... and that I'm sorry."

On that day, Emily Engel dissolved out of existence with a smile on her face and in her place, a crying child.