Justice, as fast as lightning.

Born in Green River, Wyoming, life was entirely too slow for Sebastian Hart. The first thing Baz did after graduating high school? He split. With absolutely no plan and nothing but a little bit of cash and the clothes on his back. Destination? Anywhere but there.

He traveled across the country. Well, drifted is more like it. Working odd jobs and experiencing everything that state had to offer before he got bored and moved on to wherever he happened to end up next. He bartended in Denver, fell in with a punk rock band in Albuquerque, went on tour with them until the lead singer got busted in Vegas, joined the circus in Oklahoma, became a busker in Chicago, waited tables in Alabama, interned at a funeral parlor in Virginia... well you get the picture.

So by the time he reached the east coast he'd done more living by the age of twenty five than most people do in their whole lives. So he finally decided to settle down. And what better, more exciting place to do that than a city full of superheroes?

The fast-paced lifestyle of the city suited Baz to a 'T'. Once he got settled in, he found a filing temp job at the Paragon Gazette. When the paper's regular photographer called in sick and the editor-in-chief heard Baz mention he was a photographer as well (he was lying to impress a pretty girl at the time) he offered to pay him double what he made in a week to cover a local science expo. Short on cash, Baz excepted. Fake it 'til you make it, right?

And because it's Paragon City, so of course something went horribly wrong.

The expo's main attraction was a giant prototype converter that harnessed energy from another dimension and converted it into electricity. The think-tank that spearheaded its development promised free energy for the world. And it worked! For about five minutes. No fault of the machine though. The rocket-powered supervillain Rockabilly Racer crashed the party, intent on stealing the energy converter for his own nefarious deeds. Only he didn't exactly plan on it being as big as it was, so when he and his heavy-handed henchman tried lifting it, they caused it to malfunction and overload!

Meanwhile, on the floor, Sebastian spotted a girl standing too close to the stage. He leapt into action, pushing the girl to safety just as the converter exploded, showering him with energy from an unknown dimension. And then it was lights out.

He woke up in the hospital the next day. His body had somehow healed itself overnight. The doctors were both puzzled and astonished. They said he should've died. Rockabilly Racer and his henchman were atomized instantly. The scientists who'd developed the energy converter theorized something from within Sebastian's DNA protected him from being killed by the explosion. 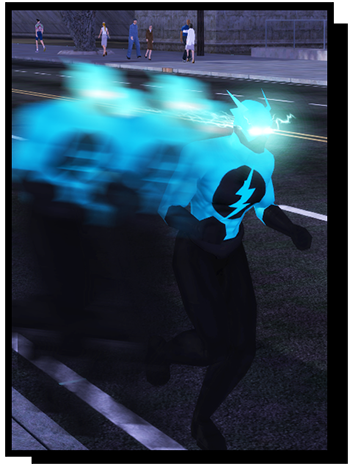 Honestly, Baz couldn't care less. He was still kicking, and that's all that mattered. He checked out of the hospital a day or two later and went about living his life without a care in the world. Until he got mugged.

When the two goons threatened to if he didn't cough up some cash, Baz's fight-or-flight instict kicked in and his body went into overdrive. Every cell in his body became supercharged and he suddenly found himself moving insanely fast. In the blink of an eye Baz dispatched his would-be attackers and was back in his apartment.

In the weeks that followed, Baz tested out his newfound abilities. He found he could run at superhuman speeds. And he was hyped! Literally. He felt energized. All the time. He found he possessed over ten times more energy than that of an average human being. So he decided to become a superhero. Why? He didn't really have anything better to do, to be honest. And he had a lot more time on his hands. And after a few shaky outings, (you don't want to know how many walls he accidentally crashed through), the supercharged speedster known as Nonstop was born! For better or worse.

Sebastian's body draws upon the energy produced from another dimension he calls "The Amp Field". Using this energy, Baz can supercharge his body's cells, allowing him to move, think, and react at superhuman speeds.

"Blink and you'll miss me." — Sebastian


Baz can run, move and react at speeds far greater than the average human. While his top running speed is unrecorded, he has demonstrated that he can at least achieve Mach 4. He continues to test his limits almost daily.

Heightened Reflexes: He possesses reflexes far above the average human. His reflexes are so advanced that he dodge bullets and snatch high-speed projectiles out of the air.

Superhuman agility: Sebastian's agility, balance, and bodily coordination are heightened to levels greater than any human being. He is able to easily maneuver on falling debris and objects, while moving at super-speed.

Accelerated Metabolism and Stamina: He possesses a boosted metabolism that can be used to heal wounds quickly. Sebastian's physiology grants him far greater stamina than that of an ordinary human being, allowing him to operate at peak capacity for at least several hours before he begins to grow tired.

Superhuman Durability: When moving at superhuman speeds, Baz's body is surrounded by a "friction cushion", a field of kinetic absorbent energy that protects him and anyone who is running with or carried by him from the rigorous effects of using his speed. Including friction, airborne particulate matter, heavy impacts, G-Force and the like.

"Need your phone charged?" — Sebastian
Tapping into his connection with the Amp Field, Baz can convert the energy from the other dimension into electricity and manipulate it to various degrees. He is able to power his strikes with electricity, throw bolts of lightning, shock and electrocute his adversaries, and charge objects.

If Sebastian had to be summed up in a word, it would have to be frenetic. Even before he became the supercharged speedster known as Nonstop, Sebastian had trouble sitting still. There are few photos of Sebastian as a kid in which he's in focus. His teachers took note of his short attention span and assumed he had some sort of disorder when in reality, they just bored him. He craved excitement. As he grew, this yearning for action morphed into a wanderlust for adventure. Explosive excitement/energy/sugar levels keep him in a constant state of vibration. All in all, he is a highly giddy, racing combination of unbridled energy, uncanny skill, and fearlessness wrapped up in a flashy wrapper.