Chaos Red put his feet up on a glass coffee table and let out a relaxing groan. It was so loud and unapologetic that even Fred Flintstone would have been proud of it

Red was young, with a thick frame and biceps made of brick. His most commanding feature though, was a crimson Mohawk haircut, which stood as stiff as concrete about 18 inches tall. He wore strange cryptic tattoos on his arms and chest, and a long black leather coat that was well-worn and smooth. 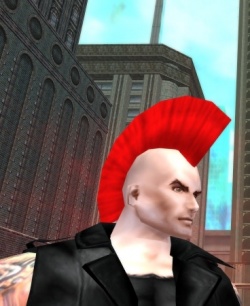 “Dad” was his adoptive father. He was also a mentor and a trusted friend. He had taken Red in when nobody else would give him a chance. They had a bad argument two years ago, one Red has regretted ever since. Things were said that were not meant to be said, and threats were made that Red had no intention of ever acting out. He made the threats though, and people heard them.

So when Dad went missing the very next day, he was the number-one suspect. After all, he was a member of the Freakshow gang on probation; he was a juvenile delinquent and he had said out loud (in front of the very same coffee table he now rested his boots on), that he was going to kill his father.

Then the next day, Dad was gone, and never to be seen or heard from again.

When it all went to trial, there was so much evidence against him it was ridiculous. Where did it all come from? Who had planted it? And why? It didn’t matter now, revenge was for suckers anyway. What mattered was he sent to prison and his one chance at redemption, his one chance of becoming someone decent; (someone that would have made his father proud), had been squandered.

A renegade like him had to move to the Rogue Islands in order to escape recapture. There, the only thing that awaited him was a life of brutality, a vicious and competitive life-cycle of kill-or be-killed. The Rogue Islands were not kind to punk kids with dreams. They chewed people like that up and spat them out into a world of gang warfare, drugs and petty thievery. Chaos Red had indulged in all those things, and he had become the very thing his new father was trying to shelter him from. 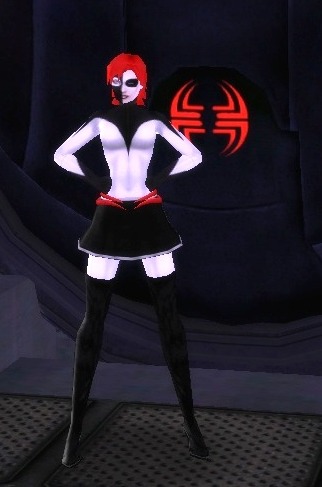 Loca was the smartest person Chaos Red had ever known, but she was also utterly insane..
“Damn it Dad! Where the hell are you?” Red said aloud again, as if the walls somehow could tell him.

“I got you babe,” came a soothing reply in return and Red turned and smiled.

It was his girlfriend, Loca. She was a cutie. More than that, she was the smartest person he had ever known; smarter even than Dad (which was really saying something). She wore a wavy bob-cut that was dyed bright red. She was average height, with a beautifully shaped neck and light latino skin tone. She was not well endowed, but she made up for it with taut athleticism - and she had eyes that seemed to catch the light and dance when she spoke.

She was enchanting, she was a genius…and she was also dangerously insane. She was both a psychotic and a split personality. She was also deranged, unstable and utterly evil.

You never could tell what Loca would throw at you next. One day she’d rob a knitting store and obsessively knit a 30-foot long rainbow scarf. The next day she’d be parading around naked claiming that all clothing was evil, while she threw all her wool into a bonfire.

Today, however, she laid the biggest bombshell of all.

“I’m pregnant Red,” she said matter-of-factly, as if she were announcing the weather.