SAMPLE TEXT
Written by Johnny Turbo
Co-Written by Steve Stevenson, Assistant to Mr. Turbo
Steve you better get your attention-whore name off of there right now
I deserve to have my name on something I'm helping you write, JT
F*** YOU
Are you going to fix the title so it doesn't say SAMPLE TEXT?
Wateva 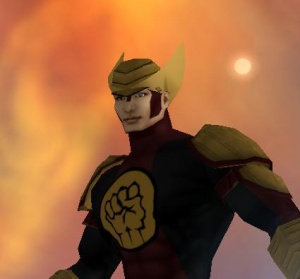 Sovereign Fist (Ray Lewis) is a fictional superhero created by @Sovereign Fist. Originally a villain in The Dread Aces, Fist evolved as a character eventually becoming the first Isles-based hero. He is now part of The Challengers and beloved by all of us. Sovereign Fist was at first an Energy Melee/Dark Armor Brute, but after the Shivans hit Galaxy City, he was rerolled as a depowered Street Justice/Willpower. By the way, I'm @Johnny Turbo and I'm writing this for him from the perspective of my character. I originally said I'd do this as a joke, but it is clear this has become much larger than a simple joke.

Sup, everyone, I'm Johnny Turbo, world-famous speedster and biggest badass around. I'm his assistant, Steve. The Challengers' PR secretary asked me to write an article detailing my fellow Challenger, Sovereign Fist, and his history, powers, relationships, all that crap. Hopefully this will make him more accessible to the public and maybe people will finally get over the fact that he used to be a criminal. You may be wondering why Fist didn't write this article himself. Well, truth is nobody ever told him to. We all just assumed he couldn't afford a computer.

HOLY SHIT THIS IS SO BORING. Wow, we just started JT. Focus. UURRRRRRGGGGGH, fine. Sovereign Fist's real identity is Ray Lewis, he grew up a troubled youth, often falling in with the wrong crowds. He joined several gangs and I believe he has a tramp stamp that reads "We Ride Together, We Die Together, Destroyers." His childhood was somewhat uneventful. He grew up on Praetorian Earth, as far as we know, could've been the Hobo Dimension or just New Jersey. He rarely, if ever, was able to go outdoors, and he was "homeschooled" by his parents.

At age 10, Ray shows he is able to control gay mens' libidos. Really JT? Really? Be serious. Please. FINE, he could control energy! He was a mutant! Or, is, well, I mean, he doesn't have his powers anymore. We'll get there. Anyway, Ray fled and joined a gang called The Destroyers to avoid scrutiny from others for being a mutant. A few years later, Ray is kidnapped and taken to Primal Earth. That's where shit gets really crazy. Can you like, try not to curse so much JT? F*** YOU STEVE. F*** YOU!

I don't really know much about Fist the villain. I know he eventually joined The Dread Aces and ran around taking whatever he pleased. He was a pretty big doucherocket. He cultivated a lot of relationships with other villains while he was a supercriminal. He frequently worked with Chimera II, Codename Devilfish, Vexx Vandal, and many more. He would pull off capers, schemes, and punch the faces of anyone who got in his way. He also worked with Karnal Sin, the future wife of his future ally, Xanatos. Future. Needed to say it one more time, huh JT? Yeah, you know what they say. What do they say? You know. I don't. Shut up.

Eventually, Fist couldn't take the lifestyle he was leading anymore. He knew he needed to use his powers responsibly and stop being such a tool. He decided to redeem himself and try to make a difference in the horrible squalor-ridden world of the Etoile Isles. He took a big risk by deciding to become an Isles-based hero, and even though he was targeted by pretty much every supervillain and scumlord in the Isles, he managed to stay alive. In the end, Fist proved he had a helluva a lot of balls. You're so unprofessional it astounds me, JT.

After years of Fist building his reputation as a hero, he was allowed to set foot into Paragon and register officially. He was excited to lend his superpowers to the fight for good, but soon, disaster struck. The Shivan attack on Galaxy City in late 2011 was a catastrophic event, and Fist was one of many called in to repel the invasion. Shockingly, the Shivans somehow nullified the mutation Fist had, rendering him completely powerless. He was nearly killed by the ordeal, and he had no idea why. Doctor Theodore Ion of SERAPH eventually helped him uncover how the Shivans absorbed his energy after he joined The Challengers.

Fist was unwilling to accept defeat so easily. With the equipment he still had, Fist continued to fight crime as well as he could. Eventually he started fighting alongside Foxy Ferret and the other heroic juggernauts in The Challengers. Although we were originally wary about Fist's past as a criminal and the fact that, you know, he had no powers now, he proved himself invaluable. His iron will was stronger than ever without his powers to fall back on, and Fist showed he was willing to stand up to any threat, no matter how badly it outclassed him. F'real though, he gets outclassed a lot. After aiding The Challengers in arresting Rockmight in Warburg, Red-Havok asked Sovereign Fist to officially become a Challenger. From then on, he was working with his new, bestest friends, fighting against the most vicious, vile, insidious, monstrous, and plain scary threats.

Sovereign Fist used to be able to control energy. He can't do that anymore because his power was lost during the Galaxy City Meteor Shower of 2011. Too bad. Show some decorum, JT. Show some not-lameness, Steve. Why do I try? Why do I even try? I don't know, Steve, you should stop trying.

Wait what, Fist can come back to life? Yeah the f*** right. Ok one, you really need to remember that kids could be looking for information on Fist, JT. You need to chill out with the swearing and stuff. Two--TWO YOU SUCK MY FAT DICK, STEVE. Do you not read what I type, JT? I'm trying to help you. You need to calm down. Yo, can we get lunch or what? My fingers hurt from doing all the typing. You're already eating the egg-salad sandwich I brought for MY lunch. WELL I WAS HUNGRY.

Sovereign Fist seems to possess a superhuman strength of will, even following his power loss during the Galaxy City Meteor Shower of 2011. Unknown if this is simply due to working against the tide of the isles for a long term basis or is rooted in something in his past, Psionic attacks and intrusions against Fist were severely reduced. A side effect of this power is that Fist cannot be spoken to Telepathically, and cannot respond when spoken to via this method. It is not an immunity, however, and skilled telepaths have found that a change of approach will work. A casual observation of his mental state has had several telepaths make the joke that Fist is "braindead". So you're just copy and pasting from Dr. Ion's assessment of his powers now, huh JT? 8===================D. Really? It looks like a dick. I know what it looks like. 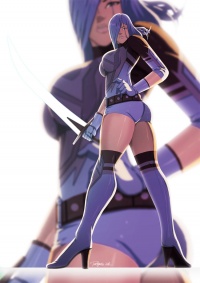 This article needed more hot chicks. She's going to kick your ass. How's she going to know I did this!? Your name is ALL OVER this article, moron! 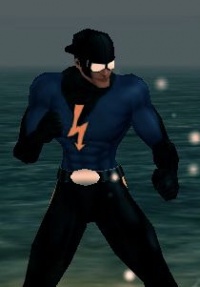 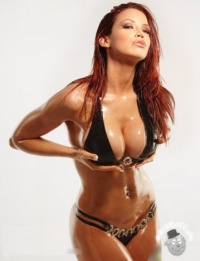 Take that down. No.