"You're afraid... Of becoming what most people with the ability to
generate electricity and hurl boulders the size of train cars are." "
" ..what are they?"
" -Monsters.-"

Strawberry Poundcake is an easily recognised villain of the Rogue Isles. Nearly eight feet tall in head to toe pink armor, her imposing figure is difficult to miss. Despite her huge size and massive strength, she is a sweet person and a loyal friend. She is also a huge fan of The Cape radio, and can often times be found dancing in Pocket D.

Strawberry Poundcake is an optimistic and naive teenage girl, struggling not only to accept her mutation, but also struggling to accept a life of villainy that she never wanted. While intelligent and extensively book savvy, she has very little experience with human interaction, and will sometimes get nervous in social situations.

Strawberry's greatest strength lies in her ability to sustain massive amounts of damage and to heal at an astonishing rate. Even her most grievous bodily injuries can be recovered from after a good nights rest.

- Gifted with superhuman mutant strength and size, her body forms hammers and fists of pure stone to strike her opponents a heavy blow.

- Strawberry's formerly signature pink armor is designed by Patrick Craft of Hand Crafted Electronics, based on the nanotechnology implemented in her previous armor, which was designed by her father, Isaac MacMillan. It has the ability to augment the mutant abilities of the wearer, and aids in the transmission of medical nanites to her more severe injuries. She no longer makes use of this armor for combat purposes, her own natural abilities having surpassed those of the technology, but she keeps it for purely sentimental reasons.

- Once believed to be a projection of her armor, Berry projects a multi-layer electrical field around her, similar to the same ability manifested in Run Riot.

- With the steady progression of her natural electrical abilities, she has achieved the "pure energy state" that her friend Run Riot has displayed on multiple occasions.

- Also similar to Run Riot, Berry is no longer required to sleep, and has a near-inhuman level of stamina. 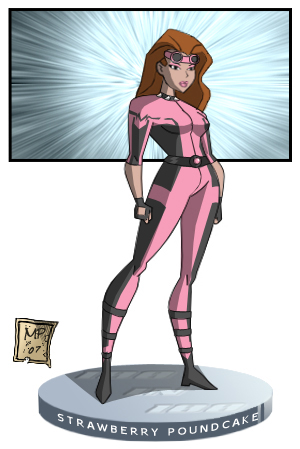 After a violent run-in with the demonic villain Steelsoul, irreparably damaging her rocket-propelled boots, Berry has been left to travel the old fashioned way - on foot. Her super-strength and increased physical musculature has however made her running speed faster than that of the average human.

Strenuous physical training has also been helping her recover quicker, and is assisting her in maintaining her stamina in battle. Her strength has also helped her overcome her physical bulk to become much faster than previously anticipated.

Having learned a great deal at her father's knee, she is gifted in science, biology, mutant genetics and robotics. She is an avid book reader, as well as computer user. She still seeks to expand her knowledge of the sciences, that she may one day learn all the secrets of the power armor.

Strawberry's greatest weakness is those she considers her friends. She is willing to do anything for them, and thusly could put her at a serious disadvantage. She has a tremendous dislike of fire - especially flamethrowers - has this has been the most difficult attack for her to form any kind of resistance to. Magic and psychic abilities hold a place of tremendous distrust, especially psychics, as again this is an ability that against which she has very little resistance.

Stephanie Macmillan was always known to be a brillaint child. Always seen sitting at the corner of the playground with her nose embedded in a book, her family knew she would be destined to continue in her father's work. Isaac Macmillan, an extraordinary Paragon City scientist, was famous for his work in designing and constructing innumerable gadgets, weapons, and augmenting devices for Paragon's superhero elite. Stephanie idolized her father and his wonderous creations, and had been planning to attend college to continue on with his research.

At age 15, what Stephanie Macmillan's mother, Josephine, had mistook for the average teenage symptoms of 'growing pains', the agony that filled Stephanie's bones signaled the first emerging symptoms of her genetic mutation. Within days, she had grown from a petite 5'5" to just over 7' in height. Unable to control her incredible strength, she demolished most of the furniture in her house, completely by accident. In fear, Josephine fled the house, and a tearful Stephanie, never to return. She filed for divorce a short time later.

Stephanie did not return to school after that. Relying on her father's library at home to continue her education, Stephanie sought to somehow reverse, or cure, her condition, to have a normal life again. Feeling freakish in her size, she never left the house, working on her theories in the home's reinforced basement laboratory. All the hours she spent in her father's library, it was only a matter of time before she stumbled on his plans for the armor.

Shortly before Stephanie's 19th birthday, her father, Isaac, had recently begun construction on a highly experimental power armor for one of Paragon's elite heroes. His smattering of notes did not specify for whom, but they did mention that the armor contained the ability to augment and amplify any mutant's abilities exponentially, as well as provide shielding for the wearer. It was completely self-contained system of interlocking parts, designed in such a manner that even if the wearer were unconcious, the armor could not be removed. Like many of Isaac's inventions, his love of puzzle-building was apparent, for without proper training, putting on and taking off the armor would be nearly impossible.

This was the breakthrough Stephanie was looking for. If she could get ahold of this experimental technology, perhaps she could find a way of reversing it's power augmenting nature, in fact *inhibiting* the mutant ability that tormented her with each passing day. Just after New Year's, 2007, having stolen her father's access cards as he slept, and using her knowledge of his workplace from the numerous times she'd assisted him in the past, she easily snuck into the lab, stole the armor, and fled.

With the new power armor in tow, going back home was impossible. With the barest of possessions, she fled to the less populated areas of the city, to try on the armor, and learn it's inner workings. Unable to be activated until worn by a living person and sealed tight, she put the armor on - and could remove it. Her father's puzzle obsession had made the locking mechanism nearly impregnable. Unable to figure out how to reverse the armor's augmenting ability, Stephanie found herself now exponentially stronger and more powerful than she had ever been before, and she found this thought to be terrifying.

As not only a mutant, but a lone teenager on the run from the law, with no money to fall back on, it was often petty crime that helped to feed her, and abandoned buildings her shelter. Her time ran out when she was caught stealing food from a family-owned grocery store. Her personal morals at the time would not permit her to fight back, afraid that someone might get hurt, and she was arrested quietly. Recognizing not only her identity, but the stolen armor, she was transferred to the Zig for holding, pending transfer back to Paragon City and her father. It was felt this would be the safest place to control her, should she decide to fight back in her armor.

Upon entering the prison and being taken for processing, everything turned to the chaos that lead to the mass Breakout. Under cover of darkness and mass hysteria, she fled the Zig, before her paperwork had even been filed. Now she finds her self on the Rogue Isles, fighting not only to survive, but to stay true to herself in a society that seeks to corrupt and use her for profit and murder. She painted the armor, dyed her hair, and sought the anonymity of the Rogue Islands underground.

"You seem to be quite the jewel, Berry-- a certain Helen of Troy; men, in their jealously, striving against one another for the prize of a beautiful persona, only to scar and shatter her in the end. Come Berry, do you really find yourself so lost as to passively accept the whims of these men?'."

With friendships slowly dying around her, she has found an unlikely confidant in Battlebriar of Nation. First encountering him outside the Pocket D Arena after Inevitable Evolution leader Run Riot fought Nation citizen Auroral, she found him to be an annoyingly mouthy upstart, and made clear her intentions to "put him through a wall". When Nation and Inevitable Evolution finally settled their personal grudges, as one of IE's leaders, Berry actively sought out River to extend the olive branch. She found him to be polite, eloquent and intelligent - a gentleman - far cry from his sleazy reputation. They have enjoyed countless conversation for hours on end, River kind enough to coach her through the difficult times in her life, and Berry willing at times to just sit and listen. He would be considered Berry's closest friend.

With leaving Inevitable Evolution and the rumors and speculation surrounding her joining The Fifth Remnant, Berry left the country for a short time, taking a much needed rest from the bustle of the Rogue Isles. Upon visiting Australia, she was met by Fintal of Faith, who as always, cheered her up immensely. With a refreshed outlook on life, she returned to the Isles, only to find her home had been destroyed, and Sergeant Prentice was dead, killed in a violent attack by Skyraiders lead by Raid Engineer Harper, where he prematurely detonated a bomb in order to protect Dread.

After much work by Dr Von Dread, Sergeant Prentice's soul has been temporarily housed in the body of recently deceased 16 year old Jessica Sardoni. Not knowing if Prentice's body will ever be repaired, or how long he will be housed in a female body, Prentice and Berry tearfully parted company.

The recent, if temporary dissolution of The Fifth Remnant's base of operations (with the sudden leave of absence by Archon Von Dread) has left Berry alone again. She has, however, been seen spending time in Pocket D with her current boyfriend, Paragon City resident Stranglehold.

After what appears to be a whirlwind romance, the pair lived up to the rumors as Stranglehold proposed marriage to Berry. It was little surprise that she said "yes". The two have been seen tearing up the Rikti Warzone as of late, the pair taking particular comfort and no small amount of joy in "breaking stuff" together. As a team, they are a formidable foe. There is no telling how far their relationship - and combat abilities - will take them. 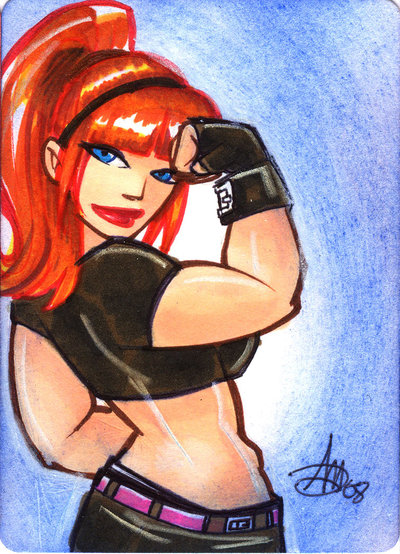 A fortress in her thoughts to compose herself in time.
A mirror full of dreams, a mirror free of lies.

- Open Your Eyes by Dreamside

Kiss me. It'll heal,
but it won't forget.

Destroy everything you touch today
Destroy me this way.
Anything that may desert you
so it cannot hurt you.

- Destroy Everything You Touch by Ladytron