"I come from the water, that weren't no easy thing. It's more than nature, it's like my destiny. I stood upon these legs and held my head up high, emerged beneath the sun to start a new life..."

-Toadies "I Come From the Water"-

Good or Evil doesn't quite apply to Thresher Shark, and which side he falls on depends heavily on point of view. While not quite the monster the news reports make him out to be, the shark isn't exactly a paragon of virtue either. He's a killer, this much the media gets right, but he's really not a threat to innocent civilians under most normal circumstances. The shark is entirely focused on saving the planet, with a heavy focus on the seas, from humans that would do it harm. He accomplishes this goal, of course, by fighting back against poachers, whalers, shark finners, and all manner of pollution spilling humans the only way he knows how... with tooth and claw.

Thresher Shark has made quite a name for himself around the Rogue Isles and Paragon City as an Eco-Terrorist to some, and a Hero to others. He is mostly a solitary creature but not completely reclusive, and is relatively laid back once he's comfortable with any given group of folks. He has moments of being a nearly decent guy, but he can also be very hostile and often condescending, especially towards humans. If the shark counts you as a friend, however, a much more kind and caring version of him will emerge (when he thinks nobody is watching, of course).

Thresher shark stands a bit over six feet tall, and for all purposes is an anthropomorphic shark. He has slate-grey and blue tones to his hairless skin, which is slightly rough like a very fine-grit sandpaper, and jet black eyes with no discernible difference between pupil and iris. His face is much more shark like in appearance than human, and on either side of his neck are 5 gill slits that will often flare open and shut if he is agitated, showing the bright red tissues inside. A dorsal fin with a ragged back edge rises off his head and neck, while a long curved fin adorns either forearm. These fins hold shape but are highly flexible, very similar to a human ear in their cartilage skeleton. He lacks a tail fin, but has very long and powerful legs to compliment a toned body that appears perfectly designed for swimming and fast-paced fighting.

Playing on the beach and in an ocean poisoned by toxic chemicals near his home affected many of the children in Jake Caracho's home town of [City Name Removed: Classified]. Most got sick, a few even died, but young Jake was affected on a genetic level, activating a hidden mutation that would begin his slow change from a normal human boy to... something else. At first the changes were subtle and 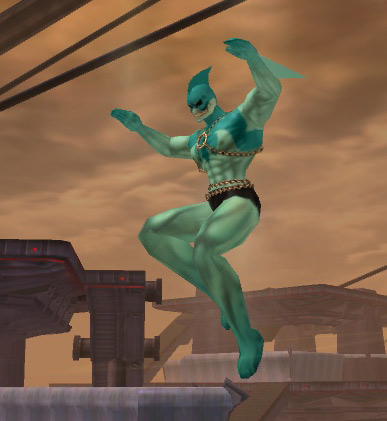 easy for the confused child to keep hidden, such as the appearance of webbing between his fingers and toes, and small slits behind his ears that would later become gills. As Jake got older and became a teenager, his skin started to thicken and become rough to the touch, as well as begin to darken and turn blue. Doctors couldn't figure out what was wrong with him, and as he mutated further and more rapidly, losing all his hair, losing all his teeth to be replaced by razor sharp new ones, and developing bumps that would later grow into fins, even his own family began to fear poor Jake.

At the age of 16, Jake had enough of being stared at by his family and doctor after doctor, while being locked away and unable to see the world outside his own room, so he left his life behind to dive into the ocean and swim as far away as he could. Once removed from all of the prying eyes and constant testing, Jake quickly found a sort of peace in his aquatic environment, taking to undersea life instinctively and living a solitary existence beneath the waves, contented to forget about his former life and leave humanity behind.

All went well for Jake for about 5 years, until his path crossed with a finning vessel hauling sharks by the hundreds onto their docks to hack away their fins and toss the still alive bodies back into the water to bleed to death. Jake went into a rage he had never felt before and unsheathed claws he didn't know he had, to one by one unleash vengeance onto the men manning the ship by relieving them of their limbs and tossing them to sea in the same way they had done to his brothers and sisters. In that moment, Jake changed drastically again and became something entirely new, he would be the protector of his home and new family in the seas, delivering punishment onto those who would do it harm. He would never again utter his human name, and took a new title from the local sharks he recognized to be his own, The Thresher Shark was born.

Life in the Isles... and Paragon?

Originally, Thresher Shark spent most of his time in The Rouge Isles following his own pursuits, and making his home in Nerva Archipelago within the reef system not far from Agincourt. Disgusted by the overwhelming filth of humanity, Thresher Shark has done his best to cull the flock of those who would do harm to his world, a near never-ending task. He also focuses a considerable amount of rage at the "hero" organization Longbow, who have set up base too close to his home for comfort, and are quickly encroaching on the reef while destroying habitats with their undersea bases in that region.

Thresher Shark wants no part in this "Project Destiny" nonsense, in truth he is disgusted by Lord Recluse and his followers, and does his best to avoid any major attention from Arachnos. He did, however, seek out one of Recluses lieutenants in the hopes of finding a kindred spirit in Captain Mako, believing surely he would share his outrages at humanity for what they have done to their ocean home. Thresher Shark was of course, severely disappointed to find out Captain Mako was nothing more than a power hungry psychopath and opportunist. Captain Mako manipulated and used Thresher Shark to feed his own ends, but he managed to figure out the spider-shark's plot in time to escape unharmed. Still holding a bitter grudge against Captain Mako, and all of Arachnos, Thresher Shark returned to avoiding dealing with the spiders as much as he can.

In December of 2007, Thresher Shark was lucky enough to finally find a true kindred spirit in the form of Dr. Primal, a massive Gorilla with an impressive intellect and an obsession with cybernetics. Sharing a mutual distaste for humanity, he and the Good Doctor have become fast friends, and Thresher Shark agreed to join the ranks of the ever growing "Inhuman League". Banding together with others of like mind and a desire to put humanity in it's place, Thresher Shark hoped to advance his plans to either force humanity to mend the damage done and change their ways, or destroy them for the sake of "The Mother".

In more recent years, the Shark has loved and lost and spent considerable time away from his chosen home in Nerva Archipelago. His ties to the Inhuman league have become a bit more loose, as he's traveled more globally in his efforts to hunt down the worst of mankind's environmental offenders. He's also shown signs of being better able to control his rage, and shockingly less violent (at least when it comes to the fates of innocent bystanders). As of August, 2010, while still dangerous and not to be fully trusted, Thresher Shark seems to be making uneasy allies amongst former enemies, and has been witnessed gaining passage into Paragon City unhindered. 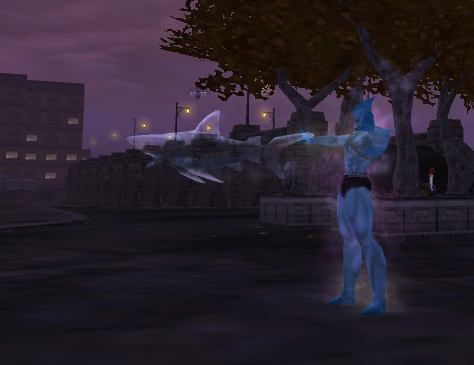 Claws: The shark's claws are modified scales on his hands that are very similar to shark teeth, and can be regenerated rapidly if they break away. He can extend or retract these claws at will, and strike with deadly speed and force in battle. 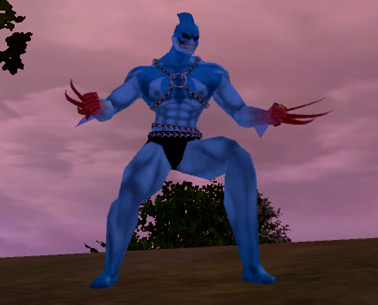 Water Control: Thresher Shark is able to manipulate water from one form to another, shifting it from vapor to a liquid and using it as a weapon. He is even able to give the water shape, favoring shark-like constructs to terrorize his enemies.

Fluid Form: The shark's ability to control water extends to his own body, turning himself more fluid than solid and rendering him both resistant to damage and very difficult to land a hit on at all.

Mist Form: Another extension of his water control, Thresher Shark is able to shift into a mist form. In this form he is near impossible to see, has no traceable scent, and can move about freely and unnoticed by all but the most perceptive of people.

Super Leap: Thanks to a combination of over-developed leg muscles for swimming and his fluid nature, Thresher Shark is able to jump extreme heights/distances and absorb the shock of landing with ease.

Amphibious: Equipped with a multi-functional respritory system, including both gills and lungs, the shark is truly amphibious. He is able to breath either air or water, as his environment dictates, and switch between the two without a thought.

Enhanced/6th Sense: An extremely strong sense of smell allows Thresher Shark to track and locate friend or foe with ease. He also possesses a sixth sense common to most sharks, having a series of near-invisible pores along his snout and the sides of his body. These pores allow Thresher Shark to sense and feel the weak electrical pulses emitted by all living things. It also makes it very hard to lie to the shark and get away with it, as he can sense the subtle spikes similar to a polygraph. Both of these senses are even stronger underwater.

Feeding Frenzy: Due to his nature, the scent and sight of enough blood can drive Thresher Shark over the edge. His animal side can override his reasoning and lead to an uncontrolled blood lust, sending him into a "feeding frenzy". While sometimes effective, it more often leaves him vulnerable as he acts without thought, and even those he would call friends need to stay clear of the shark in his frenzied state.

Electric Sensitivity: As a result of his sixth sense, the ability to feel the minute electrical fields given off by all living things, Thresher Shark is sensitive to electrical surges. He has learned to tune out the every day hum of most electrical devices as nothing more than background noise, but can be overcome by particularly "Noisy" electronics or machines, and completely disoriented or even pained by things like electromagnetic pulses. 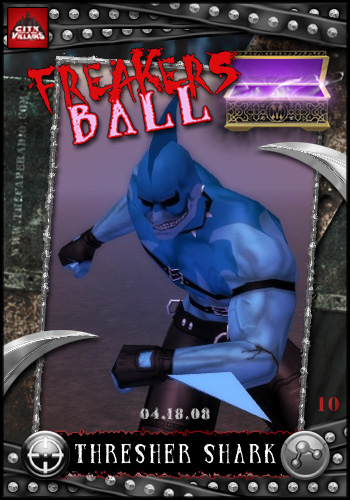 Somehow I've managed to get Thresher Shark drawn by various people either as gifts, or prizes (as mentioned in the trivia section), and it seems a shame not to display them. I've lost contact with the artists who did these for me, so if they wish to have them taken down I will at their request. For this reason, I am also not uploading the full size/full resolution copies that I have. 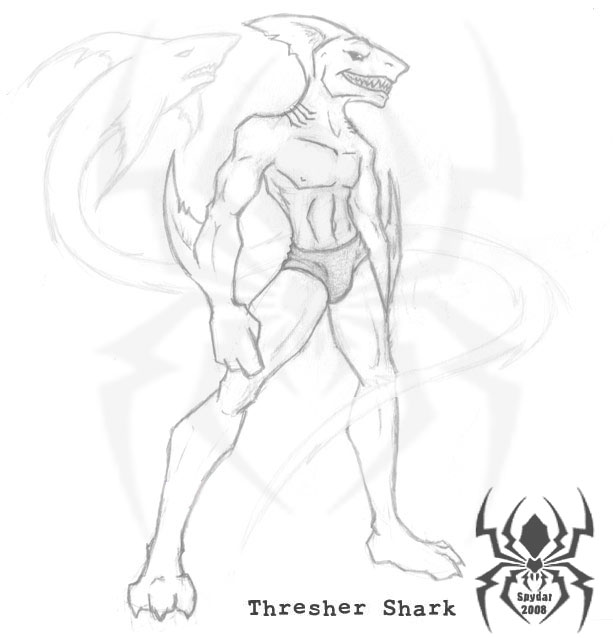