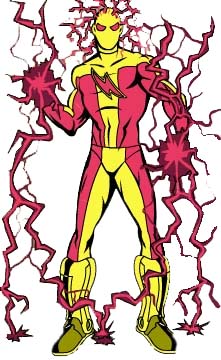 Shocstream became a superhero in 1998 at the age of 16 when his older brother (Radical Justice) discovered what he assumed was a defunct pair of robotic jump boots in an abandoned Crey Labratory. Thinking nothing of it, Radical Justice gave the pair of boots to his younger brother as a souvenir. He underestimated Shocstreams mechanical genius however, and before long the young boy had the boots up and running.

Shocstream can generate massive quantities of electricity, theoretically up to approximately one million volts. He can employ this electrostatic energy as lightning arcs from his fingertips, and his maximum charge is more than enough to kill a normal human. When his body is charged to high levels, he becomes superhumanly strong and fast. He can also glide over power lines by using the electricity contained therein for propulsion, and he has on occasion been shown to actually ride on lightning bolts.

With the assistance of the hero known as Tomorrow-Man, Shocstream was able to augment the boots further. Allowing the power from the boots to feed into his superhero costume. This was done by housing energy absorbing super conductors (designed 5000 years in the future) to the suit.

Shocstream died in early 2002 after a long battle with leukaemia.