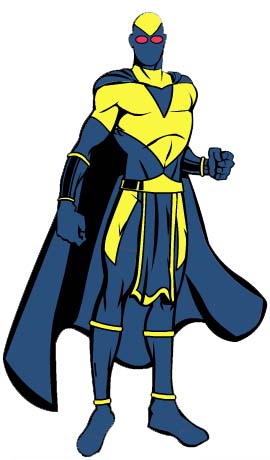 Android SA-17, also known as Tomorrow Man, was a time-travelling superhero from the future. He returned to Paragon in 2001 to warn The Defenders of Paragon of a supervillain known as Sovereign.

Tomorrow Man's bodily organs were constructed of synthetic materials. Powered by solar energy, Tomorrow Man was capable of discharging this energy via high-intensity optic heat beams. Tomorrow Man also possessed the ability to manipulate his density, which at its lowest allows flight and intangibility and at its heaviest provides superhuman strength and diamond-hard durability. Tomorrow Man often used his ability to alter his density against foes, by phasing an intangible hand through them and then partially rematerializing it — a process known as "physical disruption". This effect typically caused great pain and results in incapacitation. Tomorrow Man is also capable of self-repair and of interfacing with other technology.

Tomorrow Man helped many members of The Defenders of Paragon update their technology. Most famously the young hero Shocstream, whom he helped create a superhero costume that would work well with his powers.

Tomorrow Man was killed by the supervillain Sovereign during a battle with The Defenders of Paragon. He gave his life so that his team-mates could escape.