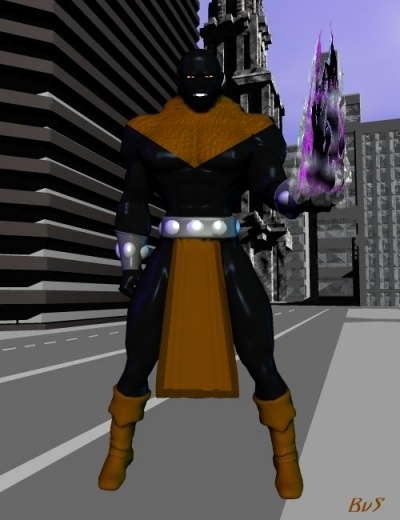 A time-travelling supervillain from the year 5054AD. Sovereign is every bit the big bad of Paragon City. A mortal enemy and nemesis to the 5054AD incarnation of The Defenders of Paragon (which still includes the immortal Xanatos), there is nothing Sovereign will not do to crush the last team of living super-heroes that still oppose him. A being of immeasurable physical power, Sovereign is more than a match for any team of heroes he faces off against.

Sovereign is a mutant capable of creating and controlling negative energy. This allows him great control over his physical body; granting him cosmic-levels of strength and endurance. His abilities also make him a great ranged fighter - firing away with ray-like blasts of negative energy. Sovereign is a very dangerous being, known to have crushed supermen with single blows, rend armoured vehicles apart with his blasts, and is virtually impervious to all forms of damage.

A master of time-travel, Sovereign has appeared in present-day Paragon City many times. His first appearance was in early 2002. In an attempt to stop The Defenders of Paragon becoming a dominant force for good in 5054AD, Sovereign (with the aid of his chief scientific advisor; Tactic) travelled back in time to kill Xanatos; the original leader of The Defenders of Paragon. Arriving not long after the team had been established, Sovereign hired a small army of mercenary Freakshow and attacked the newly furbished Defenders underground headquarters. The battle that ensued was one-sided, with the headquarters being turned to rubble and the heroes fleeing for their lives. It was during this battle that Tomorrow-Man met his end...his head ripped clean from his shoulders. His death bought the rest of the team time to escape.

In the years since his first appearance, Sovereign was an international (and even intergalactic) threat to the heroes of Paragon City. In 2011, he was broken out of the Ziggurat by Baron Blitzman, as part of a scheme against Xanatos and his closest allies. Sovereign would meet his end fighting against one such ally, the mace-wielding adventurer The Imperial. (Who was also killed in the battle, by the master of illusion, Phanto.)