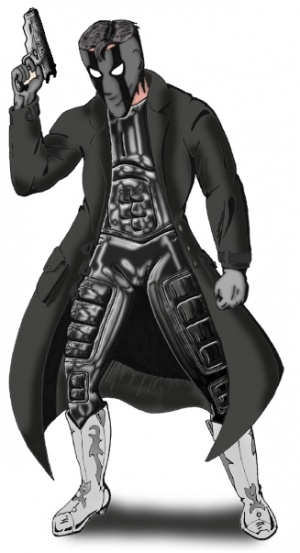 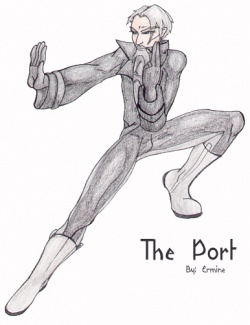 The Port without his trademark mask

The Port (real name unknown) is a mutant whose primary mutant power is the ability to teleport himself, his clothing, and a certain amount of additional mass from one point to another virtually instantaneously. He does this by means of displacing himself through an alternate dimension briefly and reappearing in a desired location. He has been shown to be able to teleport distances of up to two miles under optimal conditions, although it is at his extreme limit, and he can become severely fatigued if he tries to teleport that distance.

The process of teleportation places a strain on his endurance and that of any passengers; carrying mass other than his body and clothing when teleporting adds additional strain through his body. Through practice he has been able to teleport a passenger over a lengthy distance with himself without exhausting himself, but the strain on his body grows as the amount of mass he transports and the distance over which he teleports it increase. Extensive training has raised his tolerance for teleportation, but most of his passengers lack this tolerance. Therefore, one of his tactics is to grab opponents and make several quick teleportations with them. They usually are weakened or even pass out from the strain.

In addition to his teleportation powers, The Port also carries a converted Beretta M9 pistol that can carry a selection of different non-lethal ammunition. While The Port has used the pistol primarily against street level villains such as The Lost & the various street Gangs of Kings Row, he has also used it against more powerful enemies. Most notably against the supervillain Sovereign at the corner of the universe.

During the battle with Sovereign, The Port enlisted the aide of the famous superhero Xanatos. While they were unsure of each other at first, having to fight side-by-side against a common enemy quickly created a bond between the two heroes. The two heroes soon became close friends and worked together for years afterwards. When The Port lost the use of his legs after being shot in the spine, he became the commander in chief of communications for The Defenders of Paragon, co-ordinating many of their strike teams around the city from the safety of the groups Headquarters.

The Port was killed by Emperor Xanatos in 2006.