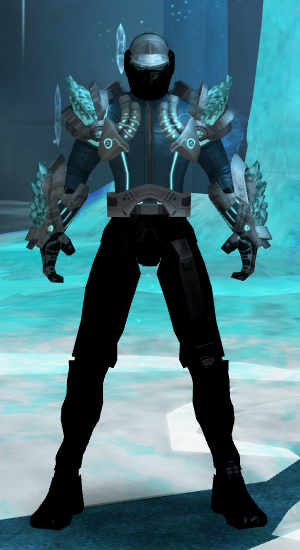 NAME: Presley Templeton
AGE: 20
ABILITIES: Hyper-intelligence
EQUIPMENT: Invented a suit of armor that can cool things down to absolute zero by freezing time itself.

Presley Templeton was the ultimate unlikable dweeb growing up. He got bullied on the regular in school, and his gross personality prevented people from ever sticking up for him. Presley internalized a lot of hatred for his peers, and it stuck with him well after his graduation. He swore to himself that one day he would make everyone regret how they treated him in high-school.

Presley attended college for a while at MIT, but instead of actually attending his courses, he spent most of his energy creating a suit of armor that he could use to get his revenge on people who had already forgotten about him. Unfortunately, Presley is remarkably narrow-minded for such an intelligent person, and he struggles to just let things go like most people would.

Immediately upon completing his suit, which was able to cool things to absolute zero and effectively freeze time itself, Presley abandoned his place at MIT and began hunting down his former high-school classmates. He would stalk them and harass them using his control over time to mess with people’s heads and evade capture. After a few of his attacks, Presley garnered himself a reputation among people from his hometown as a total creep who belongs behind bars.

As Zero Chill, Presley has always failed to see live up to his own potential, often falling into petty disputes and obsessions that ultimately hold him back. This dedication to irrational hatred is exactly what put him on Number One's radar; after a string of headlines following a series of attacks on his former classmates, Presley was recruited to join the ranks of the Hateful Hundred in their destined struggle against The Neverenders.

Zero Chill is a relentless sociopath who, once he gets someone in his sights, won't leave them alone until he's destroyed their lives. While he may not have a trail of bodies left in his wake, the psychological damage he does to his victims is enough to really linger. With time on his side, there's little that most people can to do to protect themselves from his wrath.