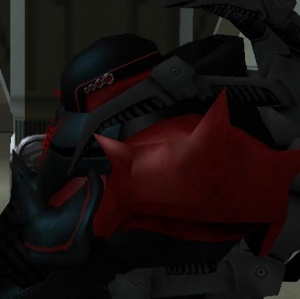 There's nothing funny about cherishing a human life.
- Blackguard-M719

Subject shows signs of post traumatic stress disorder, not enough to mandate another psyche eval but enough to warrant note. Extremely disciplined both on and off the field. Shows commendable leadership qualities though offputting due to apathetic attitude. Seems disconnected from his actions, recommend another psyche workup before he's put up for training another recruit. Should see what drugs he hasn't developed tolerances to in order to keep his aggression levels in line. Subject spitefully destroyed Arachnos computers during an operation once the data recovery was completed and there were no targets left. Possible result of catalytic drugs used to augment considerable killer instinct and increase aggression levels past safe levels. Strangely, in his elaborate personal armor he shows no signs of his usual unhealthy amounts of aggression.

Unknown chemical compounds introduced into subject's system prior to indoctrination. While unsure of specifics, subject confirms a series of bone and muscle toughening drugs as well as catalysts to augment already considerable psychic powers. Modest cybernetics augment an already sound spinal column and ribcage and supplement cardiovascular activity. During tests, subject stood underwater for roughly ten minutes and is capable of taking hits from small arms fire without his powered harness. Despite his attitude, subject shows an aptitude for reconnaissance. Dominance over strange resonance believed to be related to the Well of the Furies is also noteworthy.


Conversely, as calm as he pretends to be, subject is deeply troubled courtesy of issues with his 'programming' as well as the drugs used to catalyze his psychic powers causing outbursts as well as making it difficult to keep his aggressions in check. Killer instinct takes charge and he turned into a completely different animal. Recommend substituting agent when dealing with Arachnos due to difficulties interacting with former peers. Seems to also have a dependency on another former Arachnos Operative. Recommend keeping tabs on that individual as well in order to ensure subject's compliance.


Subject is deploys on raids on Arachnos with extreme impunity and shows no attachment to what he does, felling Arachnos Arbiters with such a lack of fear "courage" cannot properly describe. Arbiters are normally killed and dismembered, Bane Spiders are spared and the other forces are left in whatever condition the felling blow left them in. Fifth Column and Council operatives are also given a distinct lack of quarter (He goes back to kill them when he's done). Courtesy of slight regenerative properties, as well as inhuman pain tolerance subject pulls through even the hardest operations deployed on and recuperates on his own. Subject's attitude with Longbow is unknown, tensions may exist due to service with Arachnos. Subject also avoids bringing harm to Paragon Police Department and civilians, though has gotten in trouble for executing people engaged in robberies and extortion right outside of a police station due to a distinct disregard for their lives. Addendum: Metahumans abusing the weak are not people, Director.


Personal Note: Do not play dominoes with Dulmaire. Addendum: Do not leave sweets in the presence of Dulmaire.

Rowan O'Neil: Subject is loyal to Miss O'Neil as an individual, and listed Miss O'Neil as an emergency contact. Spends hours on the phone with her and sends numerous letters. Requested that she be listed as his next of kin in the event of his death. Complied with request.


Fenwick McDough: Shows a slight distaste for a "by-the-books" attitude, though jokingly says that the Radiopath is "The greatest nemesis a super villain like me could ever need." Not listed as ICE, but relationship retrieved from personal logs.