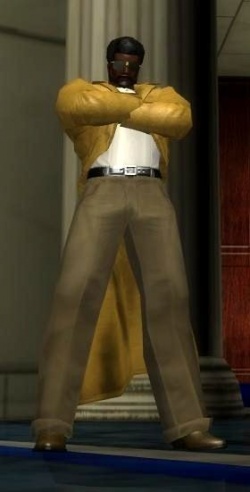 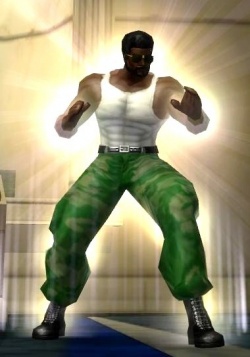 Action Carl has usually avoided super group affiliations, preferring to help any in need. He had briefly been a member of The Paragonian Knights, having known the original heroes who founded the group. Upon his return this year to Paragon, he has initiated connections to Paragon Universe to aid him in his work.

Carl Walters was born in 1950 in Paragon City in the Kings Row neighborhood. Born to a single mother, Pamela Walters, his father was unknown to him as his mother refused to address the subject while he was younger, and when she passed away from breast cancer in 1970, at the age of 43, she took whatever she knew to the grave. An exceptionally intelligent child (his I.Q was tested at being 190 at age 12), Carl excelled in school and after graduating high school in 1966, at the age of 16, was accepted to the Massachusetts Institute of Technology on full scholarship. In 1969, despite the fact that he was in his sophomore year and averaging a 4.2 grade point average, Carl was drafted and sent to Vietnam. He did well in Basic Training, scoring high in marksmanship and unarmed combat, despite being physically weak. Unfortunately, during his first tour, Carl was wounded in a firefight with the VC, earning him both a purple heart and a wheelchair, having been paralyzed from the waist down.

Upon his return to MIT, Carl threw himself into his studies, achieving a PhD in Chemical Engineering and Bachelors in Electronic Engineering. Working from his doctoral thesis (The Regeneration of Biological Tissue Via the Use of Artificial Chemical Substitution), Carl was able to acquire a large research grant, and, in 1973 made a major breakthrough. Having been able to repeatedly replace damage nerve tissue in lab animals with chemical treatments and injections coupled with precise bombardments of a complex cocktail of radioactive isotopes, Carl volunteered to be the first human test subject (feeling that he would not subject anyone to unknown dangers he, himself, wouldn't willingly face). It was during the third course of treatments that tragedy struck. It is unknown whether what happened was the result of human error, unforeseen influences, or just plain bad luck, but at the end of the day, Carl Walters was in a coma, one that would last for over 30 years.

It wasn't until September of 2004, 31 years after that tragic experiment, that Carl Walters awoke in a long term care hospital in Paragon City. He was quickly run through an extensive battery of test which determined every cell in his body was coated with an unidentifiable layer making them highly resistant to all forms of damage as well as amplifying the cells' ability to perform its duty, whatever it might be, The only exception to this was his brain, in which this coating seemed to degrade performance greatly, dropping his intelligence to below 90. The last clear memory he had from before he went into the coma was going to see the movie "Shaft", and this impacted his development, causing his speech patterns to mimic those of characters in that movie. It was suggested to him upon his release from the hospital that he consider a career in heroism, where his durability and strength would be of great use. He readily agreed, taking up the moniker "Action Carl" and taking his place among the city's numerous costumed heroes.

In the two years as a hero in Paragon City, he has foiled many a villain's plot and saved innumerable lives. During this time, his intelligence slowly returned to normal. In 2006 he announced that he was retiring from heroism to return to MIT to refresh and update his degrees. In August of 2008, after receiving his second PhD in electrical engineering, Action Carl returned to Paragon City, taking up once again the mantle of hero, and continuing his work as a private investigator in Kings Row.

Update (Sept. '08): Action Carl physical toughness has continued to grow. This, however, comes at the cost of sensitivity in his tactile senses as well as fine motor control. He is working on a method to reverse this, but has had no luck so far in isolating the cause.

Outgoing and boisterous, Action Carl is a very direct individual, usually finding subtlety and intrigue beyond his temperament. This does not mean that he won't think things through however, and his analytical skills enable him to piece together clues to quickly gather an accurate view of the big picture in any case. He does, however, have difficulty restraining his temper at times, letting his mouth and actions put him in precarious positions he normally could have avoided.

The odd chemical compound covering every cell in his body has granted Action Carl a form of invulnerability that lets him take massive physical punishment without permanent injury. The amplification quality that enables him to do this is also what causes Action Carl's enormous strength, which allows him to lift a bus if necessary. This strength also allows him leap great distances, covering 700+ feet in a single jump at speeds over 65 miles per hour. This also gives him greater stamina, quicker healing, and faster reflexes then normal.

Action Carl has designed a weapons-grade argon capacitor laser in his glasses to help weaken armor and obstacles that recharges from a kinetic energy converter.

Pure magical and psionic attacks can bypass his body's protection. Also, as discovered upon his induction to the Ouroboros group, the coating of his cells is chronometrically sensitive, causing his intelligent to adjust to his body's objective age.

Action Carl first appeared in City of Heroes in November, 2004, but had existed as a pen and paper RPG character well before then.

If Action Carl's dialog was ever dubbed by an actor, Dennis Haysbert or Tony Todd would be ideal for the role.