This character began as, and had a long, fruitful run as Agent Mackenzie. After Going Rogue's release, I've decided to rename her and pick her back up again, as she has been one of the most fun I've had in game to date! She had two sources of inspiration: the first is one of my favorite dancers on the '08 season of So You Think You Can Dance, a young lady named Kherington. The second was a friend who had a Martial Arts scrapper. I loved the animations so much that I knew eventually I'd get around to making one myself.

"There may not be a Heaven..
..but there is a San Francisco." - Ashleigh Brilliant

Mackenzie Hill was born in San Francisco to a single mother. Her father had passed away three months before her birth, but that did not stop her mother from providing a comfortable life for her.

She grew up something of a tomboy, enjoying sports and high impact activities, but took her mother's advice and learned many different types of dance as well. Dance became a fantastic love in her life and keeps her well in shape.

When she was eighteen, she graduated from High School and was accepted into one of the more prestigious dance schools in the country - Grace Dance Academy. This school however was really a cover for G.R.A.C.E.D.: Global Resource Agency: Combat and Enforcement Division. While the regular students learned the foxtrot, tango, and how to hit it in hip-hop, the top and most trustworthy students were often initiated into the Agency's martial arts and combat training program - Mackenzie was one of them. By the time she was nineteen, she had three merits for Outstanding Performance in the Field, and was well on her way to a promotion within the Agency.

Unfortunately, the organization would meet its untimely end through a series of attacks on key members of its council. The Agency disbanded, and its agents scattered across the globe to avoid further destruction.

Mackenzie found herself in Paragon City, and set up a small dance studio in Steel Canyon. From her loft apartment above the small studio, she lived and provided for herself as best she could. Her life as an agent was not over quite yet, though.


"Opportunity is missed by most...
...because it is dressed in overalls and looks like work." - Thomas Alva Edison

When Mackenzie first learned of the organization known as S.C.O.R.P.I.O., her outlook was dubious at best. However, she needed the work and missed the feeling of doing something; so, despite the lump in her throat the first time she ever met with Jack Slayton, she accepted the offer of work and began her life as a S.C.O.R.P.I.O. Agent.

It got tough sometimes. Her placement into the SpecOps division didn't come as a surprise, but many of the members within the organization are a lot more hardcore than Kenzie could've ever guessed. She kept up (at least, she liked to think she did), but usually only by a hair. She spent a number of months serving as the organizations Public Relations Representative, but has recently turned in her resignation and moved on to other things.


"We continue to shape our personality all our life...
...if we knew ourselves perfectly, we should die." - Albert Camus

Despite her prowess in combat (and her ability to knock a man out with a single, well-placed kick), Mackenzie has a light inside of her that seems to shine most of the time. Before Scorpio, she was light-hearted and perhaps a bit naive, even in the face of her extensive training. She does have a certain genuine love for life and the good people that live it, and she is prone to curiosity and sometimes forgets to be tactful when something sparks her interest.

However, much of her unshakable sense of humor may in fact be a cover for a deeper uncertainty or fear that she refuses to let loose. From time to time she may seem genuinely insulted when someone isn't interested in 'friendly chatter', and will generally make a note to respond in a negative way, which is almost always disguised as a joke or sarcasm.

She tends to be a bit prideful, but often puts forward what some may consider to be false modesty - it isn't so much that she's lying about what she can do or how she is as much as it seems that she doesn't want to say she can do something and then fail miserably at it. It is easier to say, "No, I'm no good at this," and then do fine than it is to say "I can do it," and then be found lacking.

"But anon her awful jubilant voice, with a music strange and manifold...
Flow’d forth on a carol free and bold; as when a mighty people rejoice with shawms, and with cymbals, and harps of gold..." -Alfred Tennyson

Before S.C.O.R.P.I.O., there was GRACED, and her call-sign had been Swan-Song. Kenzie had never been fond of it; the very idea of a Swan Song was a final high note before the end of things. This alone was enough to seem contradictory to Kenzie's nature. It wasn't until the destruction of Graced itself, and her own brush with death, that the code name took on significance for her.

It went unused except in her own personal missions, given to her by Bastian - until the need for an alias arose, and she gained a disguise of sorts. It is unknown to all but two people who Swan-Song is behind the tearful Jester's mask.

After a relationship sparked by S.C.O.R.P.I.O.'s Obsidian Bowman, Kenzie began to pick up the suit again for her own private purposes, and now uses it as her primary face while protecting Bowman's old haunt, Kings Row. Though their relationship is, by all accounts, finished, she continues to keep what he loved safe as best as she can, even moving to buy her own small apartment there.

Miscellany...
...and stuff that didn't fit anywhere else.

Cherry 9: Kenzie you know what they say bout stupid questions?
Agent Mackenzie: Ask them till you get an answer? 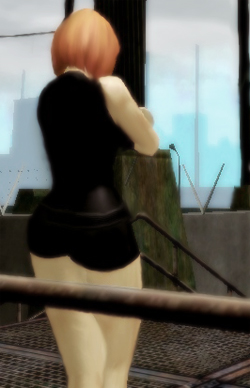 For a character like Kenzie, clothes are everything. Though she's hung up the SCORPIO Uniform[1], she's still got a number of little numbers in her closet. One costume slot is devoted to her civilian clothes, one is devoted to the catsuit she wears beneath her Swan-Song ensemble, and the last? That's reserved for The Booty Shorts.

The Booty Shorts are a long-running joke; when I started playing this game I became attached to them right away. For a leggy character like Kenzie, it almost seemed criminal not to have an outfit that showed exactly how leggy she was. I don't really use them as an In-Character point, beyond the fact that she is a bit sporty and they do make good dance clothes over a leotard; they're comfortable, loose, and give her a little more coverage than the leotard itself would. It is, however, occasionally hilarious to whip them out and check out the reactions.

That being said, I've received both negative and positive reactions to The Booty Shorts. I love them either way.

Playlist
(These links are here mostly to direct people to the music I listen to while playing Kenzie sometimes, so sorry if the videos are odd! I picked them according to best audio quality I could find. You don't have to watch them.)

Here is a listing of the currently posted stories with Mackenzie in them: