"Let us assume for a moment that my transformation has given me the power of foresight. You see, under that assumption, I would happen to know your immediate future can go, broadly, in one of two ways. On the first path, I would see you sitting back in your chair and wondering what to do with some newfound wealth, idly wondering who were the nice people who just walked by."

"Ah yes, the other path has you wondering when will the pain stop as you lie in a pool of your own blood as me and my men fight our way to what we came for. Of course, that is all assuming we choose to believe in such fickle things as destiny. Myself, I've always been a fan of choice. Which is why I suggest you now choose wisely."

Although still human in shape, Agent is very lithe, with seemingly no fat on his body and a musculature that doesn't stray far from atrophy. He values his secrecy, hiding his mutated body from sight at nearly all times. Still, the suit does nothing to hide his clawed fingers, sunken belly, or voice.

Agent's voice deserves a small section of its own. His vocal chords have withered to the point he is incapable of any intelligible speech that isn't a whisper. His mask is tuned so that is amplifies that voice to normal speech levels but it still retains its characteristic, hissing sound. It should be noted that if agitated, and especially if irritated, Agent's voice becomes even more hissing.

As for his face and skin, Agent keeps those secret; perhaps for the best.

Reclusive, polite, and more than a bit paranoid, Agent resents being called a villain, much preferring the less loaded and more fitting description of 'mercenary'. He is loyal to those few he considers friends, but to his work and his kin above that. He enjoys causing the odd bit of chaos, but takes no pleasure in killing others.

A faithful worshiper of the Church of Redemption Day, he constantly seeks to strengthen himself by gathering contacts and resources, at the same time actively avoiding making enemies. He's remarkably effective, in no small part due to his politeness, in more than one case being immediately hired for a retaliatory strike by his previous target. He's adept at subtly stacking the odds in his favor both in battle and in negotiations, setting enemies against each other while he profits from it all or finding ways to be paid for what he was doing anyway for entirely different reasons.

Some consider his ability to lead long, drawn-out and metaphor-laden exposition a power in its own right.

For a detailed description of Agent's powers, see Powers.

As a Spectre, Agent is bound to a Netherwordly being called an Entity. This seemingly symbiotic bond lets him channel and manipulate energy from the Netherworld, to aid his allies and weaken his foes rather than for direct combat.

Following Archmage Tarixus' failed attempt to siphon off unleashed powers that were rightfully Agent's, the Spectre gained the ability to magically solidify channeled Netherworld energy into a shiny, opaque black matter that is cool to the touch, shaping it to his whim. He can also animate those Shadowshapes, instilling them with part of his own life-force and granting them enough rudimentary sentience to perform simple tasks.

Almost as much a magical as a Spectral power, the ability to summon and harness Lost Souls was taught to Agent as payment for services by none other than Ghost Widow herself. It is similar to the Widow's own powers, however it is custom-tailored to suit Agent's abilities. Rather than the souls of those slain, Agent summons to himself and to the physical world Lost Souls, small, nimble, playful and dangerous Netherworld denizens believed to once have been souls of the living. A normal person that is touched by a Lost Soul will find their freezing touch draining them of life but Agent's unwanted aura, once inverted, protects him from that effect and lets him wield the beings as weapons.

Although he is not equipped with specialized equipment and implants, Agent has the authority and experience to use the GRID for long-range near-destination teleportation of friendly targets. This can be used both to (re-)deploy his Intervention Squad to himself as well as to bring unaffiliated allies within a certain, considerable range nearby.

Agent doesn't remember his past. Where his memories used to be, now stands a wall built of agony and denial. The vows he took prohibit him from going around it; still, others and himself to an extent have been capable of piecing together some basic facts.

The man that would become Agent was born in Paragon City in either 1974 or 1975; it was also there that he spent his childhood, overall happy years once fondly remembered, now completely forgotten. After graduation, he chose to serve his country, enrolling in the renowned West Point Military Academy, emerging a second lieutenant. Somewhere between 1997 and 2002, he was part of a group who fell off the face of the Earth. As far as anyone were concerned, they were still members of the United States Army, keeping in touch with their families and receiving assignments, but in reality, they had slipped through the cracks of bureaucracy, joining D.I.S.C.O.R.D. as mercenaries full-time. It was then that the Agent of Discord chose the name that would later become his only one.

At that point, the records become only minimally clearer. Agent rose through the ranks slowly in recognition of his combat and leadership skills, after a longer period as a Acolyte being accepted into the Inquisitors. It was as a Inquisitor Neophyte that the twenty-secondth of May 2002 saw him. Here his memories become a twisted mass of half-remembered battles, the faces of forgotten friends lost, injuries sustained and victories earned. But with each passing day, the War eroded the man's spirit, turning a optimistic youth into a jaded, war-worn man, until eventually, towards the end, he snapped.

Having lost too many friends and brushed too closely with death, Agent made peace with God and considered his life forfeit. Officially a casualty, he volunteered himself for the Spectre program. He took up the Spectre's Vow, ultimately abandoning his identity and past ... and against expectations, survived. 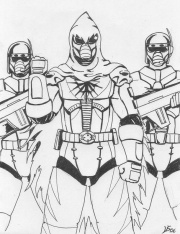 Agent and Acolytes, by Dragonshade