Don Giordano Is the leader of The Giordano Family. As far as organized crime goes, he comes from a line of greatness. He is the grandson of one of the most infamous crime lords in America, and the son of one of the most feared criminal masterminds of the 1960's, 1970's, and 1980's. He presently leads the Rogue Isles chapter of his family after having been arrested on charges of arson and double homicide.

Giovanni's grandfather, Giovanni Giordano the First (1913 - 1968), began his career with a now non-existant crime family. This family quickly realized his potential and he rose through the ranks, motivated by the murder of his wife. He became the Don of this crime family when he single-handedly conquered all of the other families. While he was the most powerful man in New York at that point, his lust for power was not yet satiated. He had every business pay for his protection, and he bought out every underground racket the city had to offer. He had now become the supreme Mafia king of New York. His son, eight at the time, admired Giovanni Giordano the First and followed in his footsteps once the Don was gunned down in his villa by Arachnos operatives at the age of 55 on December 24, 1968.

Giovanni Giordano Jr. (1945 - ??) began his career by having the vigilante group tracked down and mercilessly slaughtered by his enforcers and soldiers. At the age of 23, the man was a brilliant, but twisted, inventor. He created many ingenious weapons and devices, which he used to become the most feared man in New England in his time. Junior was famous for walking into any random bank on any given day and robbing it all by himself without hurting anyone inside, not even the security guards. His men, however, had no objection to merciless slaughter. In 1999 at the age of 54, in honor of his father, he retired and passed the line on to his son.

Giovanni Giordano III (1984 - ??) is the youngest in his family ever to become Don. The line was passed on to him at the age of 15, and he has never received any complaints from his men on his methods of running the family. Before the line was passed on to him his father created him a pair of very special gloves. These gloves had the ability to not only create fire, but project it for several feet at the time of creation. Since then, the technology has improved, and Giovanni Giordano III is rumored to be able to torch an entire building in a manner of minutes. Coupled with the gloves, Giovanni III always carries around several devices with him, most noteable being his cloaking device and his several traps. He was convicted in Paragon City on charges of arson and double homicide, taking out some high-ranking members of a more brutal crime family. Several lawyers have reviewed the case and found the evidence inconclusive, some declaring him a hero, but many have changed their minds upon hearing of Don Giordano's glorious escape from Zigursky. 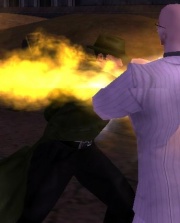 Upon arriving in the Rogue Isles, Giovanni quickly made enemies with the Marcone and Verandi families. Not appreciating in the least the way they ran things, Giovanni decided to crush them, kill any of their men who got in the way, and take back the streets for the citizens or for himself. Several members of both families owe the loss of their lives or the lives of their friends or brothers due to the Giordano Family, and many of those are thanks to Giovanni himself. Vendetta and gang warfare have gotten a little personal in the past, Emil Marcone sending men to try to kill Giovanni, breaking his glasses and totalling his car in the process. The Don responded by walking gloveless into a Marcone speakeasy, chatting with Emil, then breaking a bat over his face as Giovanni's men, Earthen Devil, Shadey Roy, and Urbanhood and his Merry Menacers attacked Marcone mobsters within, then promptly torched the joint.

Deal With the Leviathan

Giovanni always considered himself a good businessman, yet even he was nervous at the prospect of attempting to make a deal with such a feral entity as the Leviathan. However, he used Captain Mako's lust for power to track down the Leviathan. Nothing is known about what deal was made or what was said down in the Leviathan's lair, but it has been publicly shown that Giovanni is in command of a school of unholy spirit sharks, which he uses to his advantage at every possible opportunity. Or for party tricks. Or for easy fights. Or for pure enjoyment.

The Don was never a huge fan of Arachnos, a feeling which grew tenfold as he discovered the slums and gutters of Grandville. He worked out a plan to use Project Destiny to his advantage, getting inside Arachnos to either damage it from the inside or make certain that the Giordano Family was untouchable. With the help of Captain Mako, Giovanni, Capo (now Consigliere) Alexi Petranov traveled into the future of Paragon City, killing off the weakened Lord Recluse of that time and bringing back his helmet to the present Lord Recluse. Recluse examined the helmet as he listened to Giovanni talk about a treaty, about how the world would be ruined if Arachnos attacked the Giordano Family. The tyrant had no choice but to agree, and the treaty stands. For now.