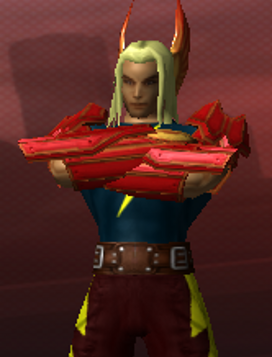 Altair's easy smile can soften even the harshest of words, but his kind exterior masks a troubled past and hides shadowy reaches of his being. His colleagues, though, are unaware of his troubles, and he prefers it that way.

Altair was born Lucas Anthony to a single mother, Olivia Anthony. Olivia was poor, and worked two jobs to support herself an her new son, who was not exactly planned. As much as she loved her son, she felt bitter toward the man who had given him to her and then left. Luke's presence conjured bad memories, especially because he looked like his father. As such, Olivia spent very little time with her child, even when she was not working.

As such, Luke grew up alone. He spent much of his time outside, away from his mother, wandering the streets of Toronto and avoiding the shadowy alleys as best he could. Because of the increasingly poisonous environment at home, his social skills were underdeveloped and he made few friends. As he grew older, he withdrew into himself.

His powers manifested around the age of ten. He burned his hands often practicing his electrical magic, and more than once caused a vicious, sudden storm. His mother never noticed, though, as they had grown used to avoiding each other, but he began wearing too-big shirts with sleeves long enough to hide his damaged hands.

With his new powers, he began to feel even more isolated than before. He knew of no other peers with such abilities, and so he felt very alone in the world. He stopped caring about school, about much of anything. He became increasingly focused on developing his magic, and every other aspect of his life was neglected. He was expelled from his middle school and placed in an alternative program.

The Circle of Thorns

Unknown to Luke was the branch of Circle of Thorns mages present in Toronto. He encountered them by chance one evening, while practicing his magic on trash cans in an alleyway. He missed, and instead struck one of the mages further up the alley. They chased him down, and would have died, had not one of the superior mages realized just what had caused that stray lightning bolt.

The mages accepted him as one of their own, a gifted person misunderstood by the rest of the world. At least, that's what they told him. It didn't take long before Luke was completely indoctrinated into the Circle. He only showed up to high school two or three times a week. He no longer went home, but instead lived with the Circle, going to school some days and causing havoc on other days. He barely scraped through high school, and upon receiving his diploma never looked back. By the age of nineteen he was a fully-fledged Air Thorn Caster.

Altair's powers pivot on the manipulation of the air around him. He is able to keenly sense weather patterns, and changes in the wind and air pressure, making him able to predict the weather very accurately. He can manipulate these weather patterns to summon powerful gusts of wind. He is also able to create rain, but he refuses to do that, for "playing with the weather too much can cause a lot more damage than you'd think."

He is able to move through the air in three dimensions. Although he appears to be flying, he is really condensing the air around him and pushing himself with it. As a result, flight takes constant concentration. If that concentration is broken, he will drop like a stone.

He is also able to manipulate the electromagnetic charges in the air around him, allowing him to summon great discharges of lightning. This is his main offensive ability, but he finds it difficult, and so can only create a limited number of discharges before needing to rest. He is also unable to create them in rapid succession, as the air needs to regenerate its charges.

He finds it easiest to channel the electricity from his hands. Unfortunately, his skin is not insulated against his own powers. As a result, the skin on his hands and forearms is horribly burnt and scarred from repeated practice. As a result, he wears heavily insulated gloves to protect his hands from further harm.