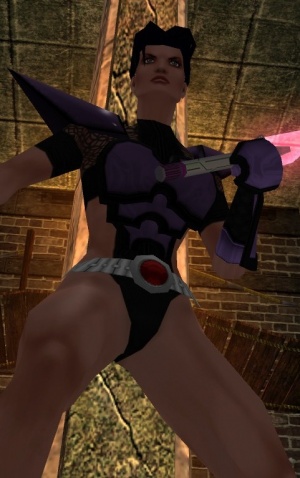 Xaia practicing adarhi, a Maradur meditation technique, in the Misfit Mansion's battle circle.
· Technology Scrapper ·
Katana
Super Reflexes
Mids DataLink
Player: @AlwaysAPrice
Physical Traits
Species
Maradur
Gender
Female
Height
6'11"
Weight
214 lbs.
Body Type
Muscular
Hair
Black
Eyes
Hazel
· Distinguishing Features ·
Exposed skin criss-crossed with hundreds of very faint scars, except for her face, which is unmarred except for the intakes along her jawline that her mask's dispensers plug into.
Affiliations
Super Group
League of Misfits
Rank
Tattletale
· Other Affiliations ·
The Xaia of Marad
After Anthrak took off, I knew I wanted to expand on his background with another character; I also wanted to create a female of his race. Enter his first-born daughter, undeniably of his blood but also his bitter foe, adherent of a caste whose every principle and deed runs counter to the values Anthrak holds sacred. He is a warrior, she is an assassin; he is forthright, she is deceptive; he honors his allies for their triumphs, she ridicules them for their flaws; he honors his enemies for their effort and skill, but she has only contempt for those she conquers. For a long time she was strictly my get-shit-done toon with little visible personality, but since I started paying attention to the contrasts between her and her father[1], she's become much more enjoyable and I've been more willing to bring her out just for the sake of RP.

The War Mask is a tradition adapted to the purposes of the many warrior castes of Maradur society, but it is not limited to these castes. The xaia, the nameless assassins of Marad, wear their War Masks for the purpose of concealing their identity so that the deeds they undertake are attributed to all of them. Unlike the Swordsmen of Marad, the xaia may remove their mask at any time they desire to blend into normal society, but Xaia herself has chosen to follow the ways of her father's caste in this respect, keeping her assassin's mask until she has proven herself his equal -- it is unclear whether this is out of regard or mockery, though Anthrak believes it is the latter.

Xaia relies on her stealth and agility to overcome her foes, and she enhances her dexterity through the use of advanced stimulants obtained off-world. These drugs heighten her senses, slow her perception of time, and improve her reaction time to the point that she becomes nearly untouchable, moving around incoming attacks with deadly grace to seek the softest flesh for her own blade to flay.

Xaia's weapon of choice upon her arrival was a slender, straight blade of blue-gray Maradur steel. Beyond its alien composition it is an unremarkable weapon -- as Xaia has stated before, unlike the warriors of her father's caste, to her a sword is just a tool and if needed she would make do with any weapon at hand. She values the balance, keen edge, and durable construction of her sword, but has no emotional attachment to it; indeed, of late she has largely retired that weapon in favor of the Talsorian sword she has earned as a token of gratitude from the Vanguard.

As do all Maradur, the xaia wear little into combat. Customarily the Maradur wear only chest and shoulder protection, believing all other defense can be effected by an alert mind and a swift blade -- Xaia's usual battle raiment consists of a snug, scant suit of impact diffusing mesh over most of her torso, with curved, pointed pauldrons and armor plates protecting her shoulders, chest, and abdomen. She also wears plated gauntlets, used to parry and club as much as to protect herself from disarmament.

Xaia is the Maradur word for "nameless". It is not shameful to be called xaia by others when one has yet to earn a name, but to refer to oneself as nameless bears a specific stigma. Xaia is the name claimed by the assassin caste of Maradur society, the clanless outcasts and exiles from the honorable warrior castes, who use the inborn strength and cunning of the Maradur to profit by murder throughout the galaxy.[2] Whereas a more traditional Maradur would proclaim her name often so that her allies know who fights beside them and their foes know who is defeating them, the way of the xaia is to state their "name" as their enemy falls. For the xaia, the proclamation that "I am Xaia" is a warning to those left alive by their surgical strikes, a reminder that their associate was marked for death by someone with enough influence to contract the nameless to eliminate an opponent.

Xaia also employs her name in the more traditional Maradur way of emphasizing the veracity or importance of a statement, though not nearly as often as her father.

Shortly after Xaia made her presence known to Earth by registering as a hero as her father had done, she was welcomed to the League of Misfits based on her father's reputation -- something that left Anthrak more than a little upset, though he has chosen not to reverse the decision of another Master Misfit until Xaia proves his distrust was warranted. So far she has comported herself honorably around the other members of the League, though she is often abrasive and has been known to order others around more as servants than as allies.