Every Halloween, the Liberty League dresses up like their favorite heroes-- each other! Sometimes we keep these costumes, and on occasion some have been known to do this outside of Halloween just for laughs.

After dressing Night-Girl up like Ascendant on one such occasion, I liked the costume so much on her that I asked if he minded if I made a "Supergirl" for him. He gave his blessing and the second (as I later found out and incorporated into her backstory) Ascendette was born.

Ascendette tends to be cheerful and friendly, but can be serious when matters require it.

She had a split personality from May of 2005 until April of 2006, during a period where she was possessed by an evil version of herself from an alternate universe. She has since absorbed this personality, bringing her cheerfulness down a few notches, and adding a level of practicality the alternate had acquired, but tempered by her own ethics.

Ascendette has a variety of superhuman abilities, the sources of most of which are unknown.

Ascendette possesses superhuman strength, though she is not nearly as strong as Ascendant. She makes up for this by using her larger leg muscles more often in combat.

She is bullet proof and impact resistant, but she only has limited resistance to fire, lasers, and other types of attacks.

She has increased reflexes, not at a superhuman level, but above what a human with her level of training would normally have. They are probably just below peak human level reflexes, but have never been tested.

Ascendette is capable of Mach 1 flight speed, but only under extreme concentration. She averages about 120 miles an hour in the city.

Ascendette can fire busts of energy from her eyes. Based on this, and the continuous energy leakage during her berserk state, she obviously has some way of storing up and expelling energy, though how this works is unknown. 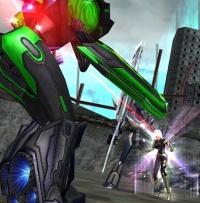 As a result of her mental merger with an evil version of herself from an alternate universe, Ascendette is capable of entering a berserker rage in times of great stress and pain. This causes a dramatic increase in her ability to shrug off all manner of physical attacks, as well as a constant aura of energy that radiates from her body, scorching and burning most material it comes in contact with.

In this state, the constant radiation of energy causes her hair to appear white, her eyes to "leak" red energy, and her clothing to scorch, tear, and eventually disintegrate if it is unable to withstand the damage.

The rage typically lasts for a few minutes, leaving her exhausted when it ends.

From age 5 to 13, Ascendette took weekly ballet lessons, which have provided her with the flexibility and coordination to use the superhuman muscles in her legs in an offensive manner.

In short, it helps her kick things in the face.

After a rather embarrassing incident involving Ascendette's first berserk rage, the more scientific minds in the Liberty League got together and developed an amazing synthetic fabric that could self-repair after absorbing energy. The fabric will still damage, but after a short period will "grow" back over the damaged areas.

Ascendette only has a couple of years of experience as a superhero. This makes her prone to mistakes in judgment in stressful situations. Often, these mistakes can cause enough stress to make her go berserk, making her more dangerous, but easily distracted.

Though she jokes of being Ascendant's cousin, Wendy Wilson is actually unaware of her ancestry, as she was adopted shortly after birth.

Some say she is a dimensional counterpart, abandoned by parents from an intolerant world. Some say she is a clone, likely made by Crey in a botched attempt to create a duplicate that would be loyal to them. Others say that she is from the future, "Ascendant's descendant", they joke.

Those who know Ascendant personally know that none of these could be true, as his powers would not have been duplicated under any of these situations.

Wendy's powers manifested at puberty, and she enthusiastically rushed into crime fighting. After the original Ascendette sacrificed her life to save a young Wendy who was in over her head, she decided to carry on the name in her honor. Ever since, Ascendette has decided that the origins of her powers are not as important as what she does with them.

In 2005, Ascendette went on a mission to an alternate Earth where there had been an apocalypse brought about by an evil version of herself. After leaving this dimension, her comrades began to notice dramatic shifts in her personality on occasion, replacing her normal bright, happy-go-lucky attitude with a caustic haughtiness. Eventually it was determined that she had been possessed by the spirit of that evil version of herself, and she went into seclusion to deal with it.

It seems as though that spirit has been fully incorporated into her personality, making her a little less naive, but not nearly as dark as her "evil twin".