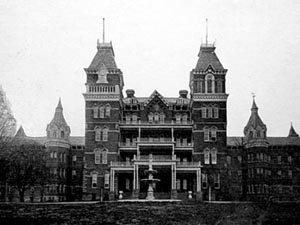 Photo taken shortly after the hospital's founding in 1874

Astoria Lunatic Asylum (often only Astoria Asylum is a psychiatric hospital on a rural peninsula once known as Astor Point, a well wooded and isolated coastal spot, south of Black Sands Nature Preserve, east of the village of Astoria Hills and north of the now-walled neighborhood now known as 'Dark Astoria' in Paragon City. Once the largest mental asylum in the state, it became famous for its extravagant architecture, its design construction faults that led to a partial collapse, as well as for a fire causing a wooden outbuilding to burn down in 1940, killing 59 (65 according to some sources) trapped in a locked ward. In the last seventy years, it has also become infamous for being the repository for criminals, deemed unfit for standard prison confinement at Zigursky Penitentiary due to the danger they pose to themselves and others or their inability to comprehend their actions, thus branded [Criminally Insane].

The need for a new asylum in the Paragon area was created by the expansion of the city and the lack of any true solution to deal with the mentally ill, which at the time was a very broad spectrum. In 1865, the City Council therefore decided to build the new structure on "a reserve of fine land at Astor's Point". The Director of Geological Survey had at the time criticized the site location, because he felt that the hillside was unstable but this was dismissed and the surveyor was replaced with someone more conciliatory. Years later M.A.G.I. would determine that the facility had, through sheer misfortune, been built atop what was described by local indigenous peoples as, the 'stained hills'. 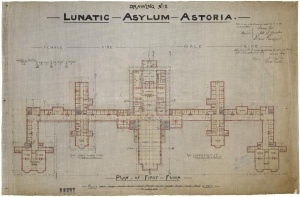 Astoria Asylum was supposed to be one of the masterpieces of Desmond Rimbauer, a famous New York architect of the era. Known for his grandiose buildings, he started designing the new mental asylum in 1870, and worked on it until completion of the main block in 1874. At that time, it was one of Rhode Island's largest buildings and was to house 500 patients and 50 staff.

Rimbauer's work on the asylum was considered extravagant. The asylum has turrets on corbels projecting from nearly every corner, with the gabled roof line dominated by a large tower complete with further turrets and a spire. The great tower, designed so that the inmates could be observed should they attempt to escape, was almost 50 meters tall.

It was later said of the design and its (forlorn) location that: "It seemed as though the sight of the building and grounds themselves might be enough to terrify patients to their senses and the path of good morality"

Treatment of the patients at Astoria Asylum, whether truly insane [Criminally Insane] or held in the institution for what would today be classed as simply being difficult, was often very callous, or even outright cruel, a feature of many mental asylums of the times.

It has been noted by some heroes and agents who have seen the interior of Astoria Asylum and been sent to Praetorian Earth have discovered Mother Mayhem (the Praetorian counterpart to Primal Earth's Sister Psyche) along with Malaise, at the helm of Astoria Asylum as well as others, using it as a place to debilitate, rather than rehabilitate, creating an endless stock of crazed lunatic henchman.